Here's a buzzword I can't get enough of after games like these: grinta.

Throughout the whole summer, while our team was undergoing another "revolution", it was easy to get lost in the chatter about mouthwatering players like Sergio Aguero and G. Rossi. But what most of us forgot in those times of luscious transfer rumors and a fantacalcio state of mind, is that our beloved Juventus was rarely ever successful because of superstars and overpaid primadonas. It always came down to the team performance, the determination and dedication with which Juventus played night in and night out that distinguished this club from all others.

Now I'm not saying I wasn't one of those that pushed for superstar quality players rather than the likes of Giaccherini & Pazienza. But here's my point. It's been a long time since we've seen that type of grinta in our squad consistently, and if the Bologna game is any indicator, it's back baby! 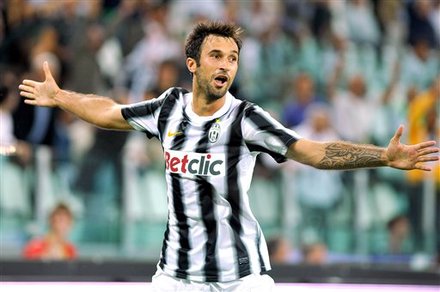 What started as a fairly typical game, with the home side slowly building up to a lead in the middle of the first half, ended up being a thrilling 10v11 game where Juve deserved victory but didn't get it. Mirko Vucinic was in the centre of all the attention in the first half. After a cheeky pass by Pirlo, he opened the scoring of the game with his first goal of the season to get Juventus off to a great start at home. Just before halftime, however, he recklessly tackled a Bologna player in their own half to earn his second yellow card and automatic ejection.

This in turn set up the second half as a great test for our new Juventus side. While last year this team would've buckled up and parked the bus to ensure a draw, Conte's men came out the gates gunning for a second goal and the win. Maybe it wasn't meant to be, but it was certainly a great display of passion and determination from our Bianconeri. A very welcomed sight after all these painful years of disconnect and half-effort.

Buffon: 6 - Another uneventful game for Buffon, though he was forced to a good save right before Bologna's equalizer. The actual goal was not his fault at all, with the blame partially going to De Ceglie and Chiellini. No fancy dribbling and sloppy backpasses from him either. A decent game overall from Buffon.

Lichtsteiner: 7 - It's becoming a pleasure to watch Lichtsteiner put in the work on the field each week. Yesterday, he played a great match with lots of running, involvement, and good help up top. If I were Conte I'd encourage him to be more adventurous in attack, especially at home when defending against slower wingers. He can always run back to cover, and can actually help us quite a bit in the last third of the field.

Barzagli: 7 - Gotta admit, I've been impressed with how Barzagli has started the season. There may have only been 3 games played, but if I'm quick to judge the underperformers, I may as well credit the well playing players right away too. If he can keep up this form and stay healthy, our defense will only get more consistent.

Chiellini: 6 - I thought Chiellini put in another strong performance yesterday. He was the only player to attempt more than 100 passes on our team with a pretty high completion rate of 88%. However, I do wish he was more aggressive in his defending for the goal we let in, he really could've made a difference there. We can argue that the corner shouldn't have happened in the first place, but once it did it was Kaiser's job to clean the cross up.

De Ceglie: 5.5 - The corner for the goal shouldn't have happened in the first place! Paolino decided to play a ball he was supposed to clear to safety, and through his mistake we ended up in a vulnerable position. Apart from that incident though, De Ceglie played another average game for us. I think it was easier on him last year when both our full backs were a liability. Now with Forrest Gump impressing on the other flank, it really makes him look bad.

Krasic: 6 - A decent welcome back game for Милош. Was very active early on, set up Del Piero in the counter attack for a good chance and had a very good shot blocked. Even hit the post in the second half when he really should've scored. He will regret not scoring, but for the first game back I though he looked good. Plenty of room for improvement too.

Pirlo: 7.5 - Easily man of match yet again. Our new maestro controlled our attack with lovely passes and some no-nonsense shots on goal. Was unfortunate not to score himself, though he will grab an assist for that sneaky pass to Vucinic for the goal. In all honesty, we haven't had a player like him in our midfield since Zidane. And that feels like it was centuries ago. Thrilled to have him at Juve this season (huge credit to Marotta for picking him up).

Marchisio: 6 - Another "work hard" and "not do a whole lot more" game from Marchisio, though he is certainly responsible for Pirlo's confidence in playing a bit more aggressively. He can probably use a rest sometime soon, though what should Pirlo say?

Pepe: 6 - I really hoped Conte would introduce Elia against Bologna. It was a home game, Pepe had already made 2 starts and put in a lot of work, but it wasn't to be. Pepe put in another indistinguishable performance, and something has to be done about his crossing accuracy. 7 crosses and 2 on target, can we at least get that above 50%? I propose a Conte spanking for each long cross he "delivers". That oughta teach him.

Del Piero: 6 - Early on, I thought Del Piero was destined to score. Had a couple shots go close, especially his trademark curl to the far post from the left side. Even he himself could not believe he missed that shot.

Vucinic: 5.5 - It's hard to grade a player that scores a goal and then gets sent off all within 15 minutes. The goal looked simple but was well taken, while the red was pretty reckless from Vucinic. Was it the 4th referee that actually got him sent off? The main ref looked like he wasn't going to book him a second time at first, but then pulled out the red. Anyways, was encouraged with what I saw from Mirko early on, what with the little link up play with Del Piero as well as the leading goal. Really wish he didn't get sent off, but oh well.

Vidal: 6 - Tried to do something from the left back position but there was only so much he could do. Why was he put there in the first place? He can be a difference maker in the midfield/attack, what is he doing as a left back?

Matri: 6.5 - I love Matri's unassuming versatility. He can be a poacher, a target man, or a complete forward. Doesn't overcomplicate things, and is pretty clever when setting up players around him. He does require decent service, and he wasn't really getting that today (except from Pirlo), but still played a pretty good game as a sub. The only striker who's a certain starter when healthy right now.

Giaccherini: 6 - He finally connected on a cross, to which I stood up and applauded. Even looked a bit threatening right when he came on. Still, he got pushed around by Bologna's aggressive players and made plenty of mistakes for the limited time he was in. A performance just enough to keep him of the shitlist. For now.

Conte: 7 - One of the streams I was watching showed the post-game interview with Conte. In it, a fragile looking Conte with a cracked voice couldn't even say things clearly, yet it was very clear what he was trying to say - this team has a soul, a spirit. I believe he was the catalyst behind our aggressive second half and I thank him for having the balls to do that. Was a bit thrown off by his substitutions, though he is still clearly feeling this team out.

#1: Chiellini as a terzino? - Tuttosport mentioned this today and it got me thinking - is De Ceglie that much of a liability that we'd rather play Barzagli + Bonucci/Vidal in the center of defence and place Chiellini as a left back? My vote would be no - while De Ceglie has been very poor to start the season, Chiellini won't add anything of significance on the left side either. He may be a bit less shaky than De Ceglie, but Giorgio is just now getting used to playing as a ball-playing centre back, I would love to see him work up a partnership there with Barzagli. As for the left back position, either use Pepe, Vidal, or Grosso if De Ceglie isn't progressing as the season develops. And by a freakin left back in January!

#2: Ranieri has gone to the dark side - Agent Gasperini did what he could, though he gave himself out too early. Now Ranieri is the coach of Merda and as much as I despise that group of people, I wish him all the best. I have always regarded him highly and sided with him in the aftermath of his firing at Juve. It will be interesting to see how he handles a situation very similar to what we had at Juventus with Diego a few years ago. Can he adjust to playing with a trequartista? Or will he be another Juve agent? Time will tell.

#3: It's Elia time, baby - can we please see Elia in the starting lineup this weekend? I have a feeling the kid is eager to play and will certainly cause some trouble on that left side (something we haven't been able to say since Nedved's playing days). It will give him less time to be an idiot on Twitter, too.

#4: Conte is still figuring things out - you can see it from some of his substitution decisions. Giaccherini on for Krasic? If Милош is tired, fine, take him off but put in someone as equally as dangerous as him, especially if you're pushing for a goal. Maybe throw in Elia and switch him with Pepe? Then, De Ceglie comes off in the 74 minute (a bit too late in my opinion) for Vidal, only to waste Vidal in the left back position. Again, switch him out with Pepe and put Vidal in the midfield where he will be far more of an asset.

As of now, no current players really deserve to be on the shitlist. If De Ceglie and Giaccherini continue their "form", they can easily cement a place on here, and they can always count on being greeted by:
- Zebina: (lifetime award) He now plays for Stade Brestois 29 in France. Nuff said.
- Amauri: (nearing lifetime award status) #IBlameAmauri