In our first test against a provincial team this season, our beloved Juventus came out victorious despite an abysmally dreadful game for the fan's eye. And yet, I imagine many of us (including myself) could not be happier with the way things went about.

A minimal 0-1 victory against a relegation-battling team is hardly something to brag about. But after the way Juventus played against the minnows last year, a Bianconeri fan could only smile after the 3 points helped us remain among the 4 teams with all 6 points after two rounds.

As much as I'd love to go into depth about the game and Juventus' performance, there isn't really much to tell. For the first 25 minutes, Siena looked quite comfortable on the ball while Juventus struggled to hold possession like we did in the Parma game. A couple outside shots woke up Buffon, while Pirlo was the most dangerous for the Bianconeri with a deflected shot after a lovely chest control in front of the box. That last sentence pretty much sums up the "performance" of our "wingers" (Pepe & Giaccherini yet again) and the "effort" from Matri & Vucinic up front.

The second half was a bit of an improvement, though not by much. A long ball by Pepe out to Giaccherini put the fragile youngster in a position to set up Vucinic with a back pass which he in fact executed. Vucinic then squared it off to Matri, who, in true poacher's style, calmly slotted it in the back of the net to give Juventus the victorious goal of the night.

Not much happened after that, though a disallowed offside chance by Siena (which ended up rattling Buffon's crossbar) and an almost-epic Buffon hickup deserve a mention. Vidal also had a spectacular chance to put the game away for good but his shot went wide (hah!). Without further ado, let's look at the individual player ratings.

Buffon: 6 - Smothered the routine outside shots easily and made sure to give us a near heart-attack when he tried to dribble by a Siena player and almost screwed it all up. He's either really dipped in concentration and consistency, or is bored out of his mind playing the Siena's and Parma's of the world when he was once the best goalkeeper on the planet. Either way, he needs to tidy up. This should be all easy stuff Gigi, get it together.

Lichtsteiner: 6.5 - Forrest Gump is quickly making his stable, focused performances a routine, though he was not particularly active on offense today. Did well to close down Siena's left flank and cleaned up many balls in that part of our defense. However, he basically needs to play as a winger on attack when he has Pepe/Giaccherini in front of him. He must be somewhat excited to have Krasic back on Wednesday (especially if someone finally translated what Conte was saying to him when Krasic was ready to come on).

Barzagli: 7.5 - Andrea was the leader of our defense today, both when Chiellini & Bonucci were alongside him. He made a couple nice tackles inside the area to prevent Siena from being really threatening and did very well to intercept some important through balls. I bitched that he started instead of Bonucci against Parma but today he spearheaded our defense. Kudos.

Chiellini: 6.5 - A wall yet again until he had to come off due to a knock. Nothing flashy, tho he had a reckless challenge or two to start the game.

Grosso: 6 - The simple fact that I even had to write his name just now makes me want to give someone a 1. Fabio, however, executed his role in Sunday's game quite well. By that, I mean he didn't screw up immensely and was somewhat noticeable during play build up. Had a decent cross that no one converted towards the end of the game.

Pepe: 6 - Started off on the right, then played most of the game on the left, but he failed to impress on both sides. He still put in the work on the defensive end, and was the one to find Giaccherini for the pass that led to the goal. Immagine how useful of a backup he can be if he can be a semi-constant offensive threat?

Pirlo: 7 - For the second game in a row, Pirlo was the only one to organize our side offensively. Most likely due to the inability of our wingers to make a difference, Pirlo has stepped up and been a true playmaker on both sides of the halfway line. He'll also surely be relieved to have capable wingers around him (hopefully soon).

Marchisio: 6 - A very "meh" type of game for our volley-master. He put in the work as always, though was unusually sloppy and rash with his tackles and attitude. Would love to see him make more of an impact in these midfield-heavy games.

Giaccherini: 5.5 - Not much of an improvement from last game (though it was low hanging fruit). His pass to Vucinic, albeit routine, helps him get closer to a 6. I could just be a sucker for hockey assists. In truth, I've been very unimpressed with him so far. Can we see Krasic & Elia soon, please?

Vucinic: 5.5 - Since he doesn't have a middle name, can we just baptize him as Mirko Lazy Vucinic? He is far from being the Mirko we respected at Roma, and he is not even feeling like working for it at the moment. I was thrilled to see him pass to Matri on the goal, though he would've just as often taken a wild shot from there. If Quagliarela's knee holds up, Quaglia/Matri may be our best striker partnership as the year goes by. We'll have to wait and see.

Matri: 6 - Took his goal well and that's pretty much all he did. A very Trezeguet-like performance. With better service, he would've been more dangerous. Is the Bologna game here already?

Vidal: 5.5 - As soon as we scored, Conte took off Vucinic to switch to his 4-3-3 with Vidal, Pirlo, and Marchisio in the middle. Normally, without actual wingers, Vidal played a bit further up the pitch and even had a chance to finish a great pass from Del Piero. His finish, however, was quite embarassing. In summary, he did not provide the spark he usually can. 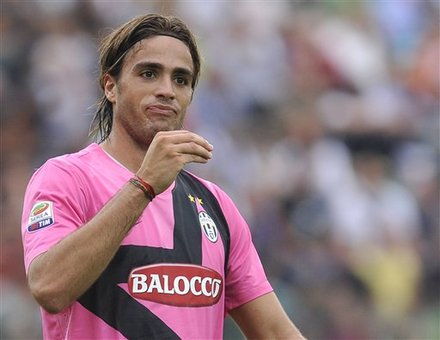 Conte: 6.5 - Okay, I get it that he doesn't like playing new players without spending a good amount of time with them in training, but this whole Giaccherini/Pepe winger deal is getting really old. Let Krasic & Elia roam, goddammit! Kudos for finally getting a win against a provincial side, however. May it be the first of many.

#1: Midweek fixtures suck - Mostly cuz it's impossible to watch them in the USA if you're working, and you don't really get a lot of time for writing posts about them until the weekend. I'd even take a lunchtime kick-off over a mid-week fixture #desperation

#2: Time for Quagliarela to come back - Vucinic is lazy and unmotivated as a seconda punta right now, and we can use some creativity up front. Let's see some more of those unnecessary diving headers soon, shall we Quags?

#3: Buffon needs to stop messing around - two odd hick-ups in two games? C'mon Gigi, you're better than this. Man up, lawyer up, hit the gym, whatever. I miss the no-nonsense Gigi from a couple years ago.

#4. I'm officially in love with Gasperini - a brilliant secret agent he turned out to be, dragging Inter to Benitez-era status. Not like that was hard to do or anything. Here's to hoping he doesn't get fired anytime soon.

- Giaccherini: (2 weeks) two piss-poor performances in a row to start his Juve career. Excuses can be many, but he needs to toughen up and take advantage of this (hopefully) rare opportunity.
- Zebina: (lifetime award) He now plays for Stade Brestois 29 in France. Nuff said.
- Amauri: (nearing lifetime award status) The shithead whom I once defended for being a decent player is now Juventus' black sheep. #IBlameAmauri