Share All sharing options for: Random Notes, Officially Official(s), a Calmed-Down Attitude, Loud Noises, and a Cherry on Top

I've calmed down. I really have. I promise. 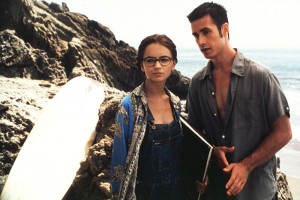 I know I went off last week, for those of you who follow the message board. Friday was a bad day for me. But really, why? Juventus signed a good player. A really good one. He's not Sergio Aguero, but he'll have to do. And, I can't stress enough that he's still good. I guess if you're expecting the head of the cheerleading squad as your prom date, but wind up with the artsy, kinda-nerdy yet still cute (no, Hollywood, it takes a lot more than a ponytail and glasses to make an attractive girl look homely) you will be bound for disappointment.

Although, come prom night, who knows -- you may end up better off.  I'm sure the artsy girl will be able to hold a conversation at least.  Certainly much better than the vapid pep-queen, right?

Alright, Mirko Vucinic isn't as cute as Rachel Leigh Cook, nor does he come with the big-name star power that Kun Aguero would have.  Nor does he conjure as much excitement as Giuseppe Rossi.

But he's still a really good player.  A nice player to have, on a team that overall looks much stronger than it did last May.

Friday I was singing a different tune.  The day can be summed up by a series of Tweets which occupied my psyche for the day and bled into the weekend. (Thanks, Aaron). 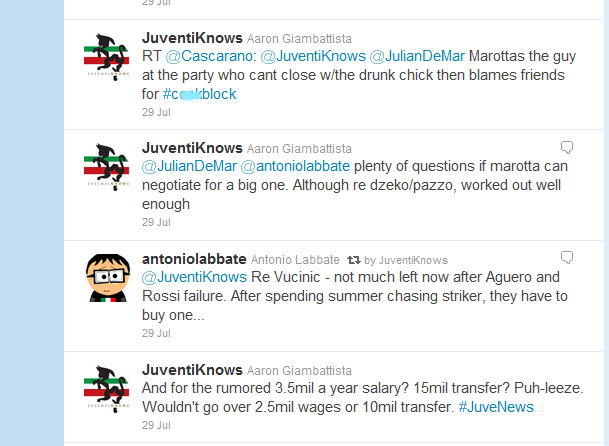 Yea, we were annoyed.  I was angry.  Marotta can't close! I shouted out loud, at least in my puny little head, to myself, the only thing around who would listen. 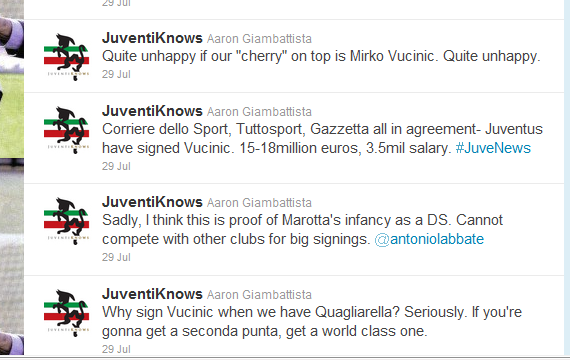 I agree, I agree!

And the Mortal Kombat "FINISH HIM!" moment for the day: 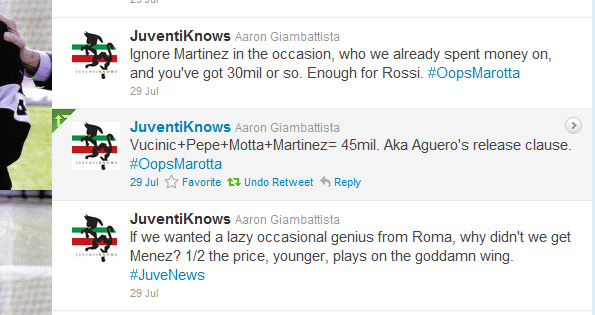 But what a difference a weekend can make.  After a weekend which mostly involved me texting Romanista friends of mine with profanity-laden tirades involving threats promises of physical violence, I eventually began listening to their rational words.  He's a big-game player (when he wants to be), he can score, and he was the most important player on a Roma team that nearly spoiled Jose Mourinho's historic treble two years ago.  Life isn't that bad, no?

Particularly put into context of the depth that this move gives us.  Right now, with Vucinic, we're capable of playing a viable 4-4-2/4-2-4 with Vucinic as a seconda punta or a wide attacker, or a 4-3-3 with him up front on the left side.  If we can add a true left-winger (i.e. Vargas), as we've been linked heavily with since the opening of the mercato (the position, not necessarily the player, whose names have fluctuated), we can field a nice fleet with Vargas wide and Vucinic or Quagliarella up front with Matri, and a midfield completed by Pirlo/Marchisio, Vidal/Marchisio, and Krasic.  If we pick up another central midfielder, as we've also been linked with a redux of Alberto Aquilani, then a formidable 4-3-3 could be had.  I do love the idea of a 3-man midfield consisting of Pirlo/Aquilani, Marchisio and Vidal, with Vucinic, Matri, and Krasic forming a trident up top.  An Aquilani acquisition would certainly supply the sort of depth required, and hell -- I might even start dreaming of fancier, more complex tactics, such as a 4-2-1-3, but I won't go crazy right now.

Let's also not forget the full slate of moves completed so far.  We picked up a world-class regista (Pirlo) for free.  I know he's 32, but a year ago he was still sought after by a Chelsea team with seemingly unlimited funds and the world as its oyster, before injuries spoiled his 2010-11.  We also picked up a highly-rated, versatile, pure modern midfielder (Vidal) for 10.5 million and one of the top 2-3 fullbacks (Lichsteiner) in Serie A for 10 million.  Add to that another workhorse (Pazienza) in the midfield and a competent, above-average left back (Ziegler) -- something we haven't had since 2006, save for a few weeks last year before Paolo DeCeglie (who by the way, will be back) broke his kneecap in a freak injury -- both for free, and things are looking up.

Yes, it's officially official.  Vucinic is a Juventus player.  We have options, and now maybe we can honestly compete for one of the three remaining Champions Leauge spots in Italy.  I'm not just being overly optimistic, there is still a bit more work to be done in order to complete this team.  August has just begun, and it's going to be a long, hot month.

Speaking of "Officially Official" signings, I'm pleased to announce the newest additions to the Juventus Offside team of writers.  Yayy!!!  Alright, great, everyone's gotten their congratulations out of the way, and now it's time for business.  Which, of course, means fun.  Welcome aboard, fellas!

Where were you eight years ago today?  I can tell you where I was:  at Giants Stadium with my brother and father watching Juventus beat Milan in extra time to win the Supercoppa.  What a game, and what a treat.  It was the first time I'd see Juventus play live, and wouldn't be the last.