The mercato began with a loud thundercrack, with a gaggle of solid, free transfers. Pirlo, Pazienza, Ziegler, all gratis, were followed by Lichsteiner and, most recently, Vidal. All moves I've approved of. But what now? While the move Sergio Aguero went nowhere, and the move for Giuseppe Rossi stalled for the time being (but more on that later), it is being reported that Diego Lugano's agent is in Milan to meet with Juventus' management. 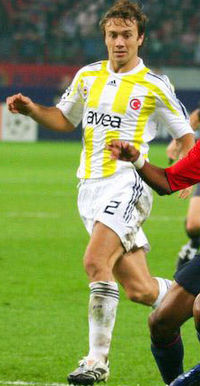 Not a bad move - solid player, and a move which should have been made two years ago.  And while he's set to turn 31 in November, the release clause in his contract is reportedly a meager 3.5 million Euros.  The Uruguayan captain also has an EU passport, so he won't take up any of our foreign spots.

The only negative I can think of is the type of defender that he is.  He's a tough, hard, man-marker, ala Chiellini.  The problem is, we already have Chiellini.  And Bonucci.  I've always believed that a better partner for a man-marker would be more of a ball-playing sweeper, like the Cannavaro/Nesta partnership for il Nazionale circa 2005-06.  That isn't to say that I don't like Bonucci, nor do I think that a Bonucci/Chiellini partnership is totally unworkable by any means.  It's just a matter of preference, and utilizing the types of players at one's disposal most efficiently based on their talents.

Last week it was reported that Juventus were reportedly interested in offering Bonucci for to Fiorentina for Vargas, and then making a move to Wolfsburg for Simon Kjaer.  Although I would ultimately hate to lose Bonucci, I liked this idea a lot.

"Yes, I am a Targaryen. My other car is a dragon."

Although Kjaer had a rough first season in the Bundesliga, at only 22 years of age he's already proven that he can succeed in Serie A, which cannot be underestimated.  He would also complete the second half of the man-marker/sweeper combination I've outlined above.  Not to mention he would make a pretty convincing character on Game of Thrones, which is among my favorite shows.

Oh, and we would also end up with one of the better wingers in Serie A on the left side -- a glaring point of weakness for us.

Like I said, I love Bonucci, but if we can walk out of a deal down one Bonucci and up one Kjaer and one Vargas, count me in.  And such an outcome could actually be doable.  However, those rumors have virtually disappeared, so it seems moot right now.

But it still stands to reason that an incoming Lugano could have other ripple effects on our backline.  If he does arrive, that would leave us with 5 centrebacks right now between him, Chiellini, Bonucci, Barzagli, and Sorenson.

In other news, the chase for Giuseppe Rossi has hit a stall.  Rumors last week included differences between Villareal's asking price and Juve's offer ranging from 2 to 10 million, as well as their asking to hold onto him until after the Champions League preliminaries.  I wouldn't be surprised if the latter part is pivotal.

Although many sources are stating that Juventus inquiring about Mirko Vucinic as indicative of moving on for Rossi, it could be the case, but perhaps may not.  The obvious logic would indicate that signing Vucinic, a seconda punta, would squeeze out a move for Rossi, another seconda punta.  However, it's possible that this is not the case.  Vucinic is more versatile than that one role and could represent that elusive left-sided attacking player which we've been coveting.  He played in that role in Spalletti's 4-2-3-1, and could fill that role in Conte's 4-4-2/4-2-4 system.  And if you look at the other players Juve were looking at for the left side, he fits the profile:  quick, good pace and dribbling ability, around 27-28 years old, and costs around 15 million (think Bastos, Vargas).

I know that it's optimistic, but it's a possibility that we could end up with both Vucinic and Rossi.  Yes, we have far too many (mediocre) strikers at the moment, but come on -- you don't expect us to begin September with Amauri, Iaquinta AND Toni, do you?

What are your thoughts?