Although I grew up with Serie A on Sundays rather than the NFL, I still had a healthy appreciation for American sports. Chief among them was and still is baseball. I've always been an enormous Yankees fan, particularly notable considering that I grew up in the middle of the most depressing period in Yankees history. Being that my parents were both from Italy and neither cared about baseball, I didn't even have the knowledge of a fabulous history to help me sleep at night. There were no tales of Murderer's Row, Ruth and Gehrig, Mantle and DiMaggio or even Munson or Nettles in my house. No, I grew up happily watching the Yankees lose, even in the midst of a good period for that A-ball team in Queens whose stadium Juventus will be adorning tonight. I had to settle for my own memories, which peaked with Don Mattingly never winning anything. 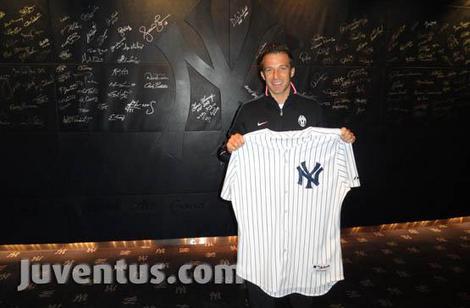 It didn't take long for the Yankees to regain their winning form, and in the mid to late-90's, they pretty much were like the Juventus of baseball, while Juventus was the Yankees of Serie A.

Last night Alessandro Del Piero had the opportunity to attend Yankee Stadium and meet the other captain, Derek Jeter, during the rain delay.  Juventus.com agrees with my earlier assessment:

"The city changes, as well as the stadium and the team, but the extraordinary appeal shown by Alessandro Del Piero doesn’t change. After John Tavares, Canadian ice hockey star, and Ryan Howard, top player of Philadelphia Phillies, the New York Yankees - the most prestigious baseball team in the world, a sort of “American Juventus” - were also delighted to host the Bianconeri’s captain."

Hey, I've said it before -- like the Yankees, Juventus looks good in stripes, and because of (and only because of) a farsical scandal have "officially" won 27 league titles.  They're both from northern, industrialized cities, owned by powerful, controversial people, and are the most popular team in their respective sports and countries -- while simultaneously eliciting levels of hate and vitiriol from non-supporters which only years of dominance could gestate.

Yes, like a good carbonara, I present to you the Juventus and the Yankees.  For those unfamiliar with Italian cuisine, carbonara is a favorite pasta dish of mine, employing pancetta, egg yolks, butter, and all kinds of delicious stuff that you know is going to go straight to your hips.  Yet, it's like eating a baby angel with every bite; you know how bad it is but it tastes amazing and decadent.  I would have made the comparison to foux grais, but I decided that's a little too much.  At any rate, as you enjoy the game from CitiField tonight, enjoy this open thread and pictures for your viewing pleasure. 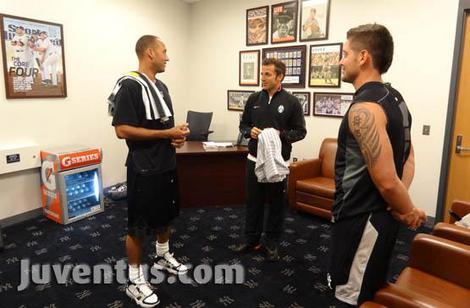