I hate conspiracy theories. They're nearly always oversimplifications of complicated situations, and the people that latch onto them combine a strange yet volatile mix of highly insecure with wildly bored with reality. For example, in a way it's almost scarier to confront the fact that that a group of twelve individuals could murder 3,000 people at once in the most important city on Earth, than to believe that it was an inside job. If, however, the government was behind it all along, well -- that provides an element of control over what is a chaotic situation in an unpredictable world. (Alright, that's the last of that. I will not get political, nor will I discuss this any longer, nor will I entertain any contrarian "facts" about the above-referenced "theory" -- so don't even effin' try it!). 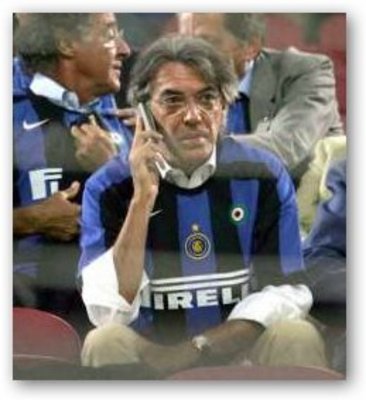 "Good news...no, it's not about that itchiness, the doctor says it will be gone in a week...I'm talking about the referee..."

However, when it comes to Calciopoli -- I hate to say it, but while at its very best it screams a crime of opportunity, at the very worst it shouts conspiracy right into my face.

With this in mind, loyal readers, please enjoy the new Bianconero rap:

It's the best song since the inno circa 2003 (a personal favorite of mine).

I enjoy the resentful, snarky references to Calciopoli in the rap.  And I'm glad that under Andrea Agnelli, the club is growing some balls and at least planning on taking action.  I understand that five years ago the climate was much different, and the pressure to fold was far greater.  But when you consider how severe the consequences were for Juventus compared to the other punishments, particularly in context of all of the new evidence which has come to light about Inter's (who went unpunished!) own involvement, this whole "scandal" is a complete and utter travesty.  Action is long overdue.

It appears that much of the sports journalistic world is beginning to agree that a) Juve were (at worst) only guilty of Art. 1 violations (broad "appearance of misconduct" violations, which have only previously resulted in fines and minor points penalties); b) Inter and Milan were both guilty of Art. 6 violations (the actual "match-fixing") which should be heavily punishable and relegatable (although now the 5 year statute of limitations has conveniently just tolled); and c) in light of the fact that former Inter board members were both in charge of Telecomm Italia which conducted the wiretaps (only of which the Juve phone calls were brought to light while the Inter ones were buried and indeed far more damning when released years alter), and the FIGC disciplinary committee which imposed the penalties, the whole thing could have been an overt effort by Inter to take down their unbeatable rival(s) and secure hegemony at the top of Serie A.  It's even more striking and plausibile considering that this is precisely what happened after 2006.  Italian football has never been the same.  Oh, and by the way, Guido Rossi went from head of FIGC during the rushed "investigation" to a job at the top of TIM (in other words, thanks for a job well done).

I'm constantly asked questions about why the FIGC reacted in the manner in which they did and when they did.  Perhaps part of it had to do with the Inter-influence on its board.  It could also have to do with the fact that it was the perfect storm of negative media attention against the Italian game at the worst possible time -- immediately after the national team's fourth World Cup victory.

During all of the turmoil, let us not forget that there was also FIFA involvement.  They feared a scandal gripping the country that just won their precious, immaculate, completely morally-wealthy tournament, which is run by their precious, immaculate, completely morally-wealthy organization, would reflect poorly upon them.  When Juventus threatened to appeal their conviction and penalty, FIFA threatened to ban Italy from international competition.

Or maybe this is merely symptomatic of Italian justice?  I mean, if Vanity Fair, is to believed, the Prime Minister allegedly conspicuously hosts wonton "bunga bunga" parties, appoints showgirls and nude models to Parliament and important government cabinet positions, and has (again, allgedly) changed laws in order to avoid prosecution and retain his hegemony over the country's media since he became involved in politics over 20 years ago.

Juventus reportedly lost over 200 million Euros due to the scandal, unfairly.  It nearly destroyed what was (IMO) the best team in the world, and rocked the calcio, setting Italian football back years.  While I'm sure the sport on the peninsula can recover to pre-Calciopoli status, this was an unneccessary blow.  Onward, Andrea. I'm not confident that you will (or can) ultimately be successful. You'll probably have a more difficult time than a defense attorney during Stalin's show trials.  But I appreciate the chutzpah. Make us proud.