Share All sharing options for: Officially Official: Pirlo is a Juventus Player

I had a feeling that this was going to happen. It just made sense for so many reasons. 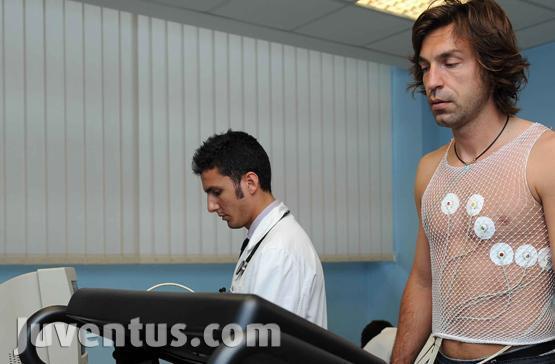 "Bon Jovi?! You've got to be kidding. He stole the look AND the shirt from ME."

Ladies and gentlemen, I present to you: Jon Bon Pirlo!

I've also got a feeling that this means the end of Aquilani's tenure in black and white.  While I can't say that fact alone makes me happy, I'm fine with this as the alternative.  I've said it before (see above) -- 16 million Euros spent on Aquilani, plus his high-ish (I believe 4+ million Euros annually for the next 3-4 years) wages versus comparable wages but a free transfer for three years, and the choice isn't as difficult.  Particularly when it's someone who's as polished, accomplished, and classy as Andrea Pirlo.

I know, I know, he's just turning 32, and normally a student of Soccernomics such as myself would cringe.  However, he (like most Italians) was a late-bloomer, and doesn't play the type of game that requires blazing pace and stamina.  If he were a MLB baseball pitcher he would be Mike Mussina or Greg Maddux -- a control pitcher, who is smart, cerebral, and most importantly, knows how to pitch.  Both pitched professionally for years, pushing their 40s, because they could.  Similarly Pirlo -- who was never the quickest, fastest, strongest, or most explosive player on the pitch -- relies on guile, precision, and intelligence.  Those attributes aren't gone by 32.  Even the normally Anglo-obsessed ESPN Soccernet rated him #23 on their list of top 50 players at the 2010 World Cup just one year ago, conspicuously noting his age (as well as his Gypsy roots for some reason).

Considering the fact that there's Albin Ekdal, who is just a phone-call away from coming home from his loan spell lurking in the shadows, I feel quite comfortable right now.  Perhaps moreso, knowing that Pirlo, who has won just about everything -- an Olympic Bronze medal, as well as championships from two Champions Leagues, one FIFA Club World Cup, two Scudetto, and one little tournament called the FIFA World Cup, where he was thrice named man of the match and eventually honored with the bronze ball award -- will have the opportunity to teach the young Swede a thing or two.

The above-video is here in order to show two things: First, Luca Toni flopping all over the pitch, which is always hilarious to watch. Second, Andrea Pirlo calmly and powerfully burying the resulting penalty that would serve as the winning goal in what was a must-win match for Italy at Euro 2008.

And finally, this video is being shared because it consists of a compilation of the maestro's work set to a background of (obscure) Bon Jovi music.  Rock on, Bon Pirlo.