In the still-un-released podcast for the week (work has been insane, hence why light posting, also no time for editing) Adam said amongst all the gloom and doom of Juve of late, we needed Marotta to do something to cheer us up. It's not Sergio Aguero, but I'm delighted to see that Claudio Marchisio has finally extended his contract, earning a much deserved pay raise and tying the Turin-born-and-bred midfielder that joined the club at age 7 until he turns 30 years old. 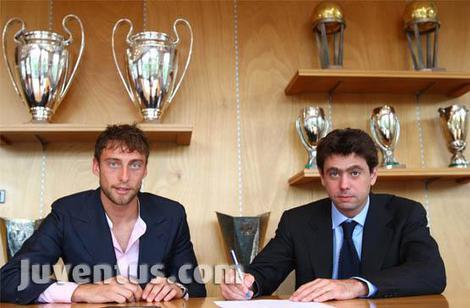 Unfortunately, the last year or two may have been a slight decline in the midfielder's reputation, after a breakthrough 2008-2009, he's been shunted around the pitch as a trequartista, winger, more or less any position outside of his ideal one. It has certainly derailed his progress developing as a central midfielder, and hurt his average performances a fair amount. Despite Lippi and Delneri both hailing the young player as a centerpiece of their squad, it turns out, being a centerpiece is not too great if you're playing out of position.

There's no doubt in my mind right now that Claudio Marchisio is a diamond in the rough. He is playing well, mind you, scoring a few brilliant goals here and there, but he could play better. All it requires is a coach that believes in him, and is willing to play him in central midfield. If the choice for next year is Aquilani in the center and Marchisio on the left, as opposed to Marchisio on the left and a genuine left-winger occupying the wide spot, there's no doubt I would prefer to let the Roman Principino go, however reluctantly.

His potential value to the team goes beyond simply his unreached playing potential, this kid has Juve in his DNA. Much has been made about how this team does not play like a Juve team, lacking the grinta, steel, and spirit of teams of old. There has even been criticism of old legends like Gigi Buffon as having lost the winning spirit that made us great, and not just by John Elkann, but by Andrea Agnelli and Alessio Tacchinardi as well, hardly novices to the world of football.

I think it's hard to see 1 player with the right spirit surrounded by mediocrity, but Marchisio has it. You can see Giorgio has the never-say-die spirit as well. These are two players that knew Juve before Calciopoli, Chiellini was in the first team, whereas Marchisio spent 12 years in various Bianconero youth team systems. They do not accept defeat. While Bonucci is saying "we must do better" and Buffon is laughing with the enemies, Giorgio is furiously ranting in from of the mics, and Marchisio kicking over advertising boards. What may appear to be petulance and bad sportsmanship is in reality, a deep sign that these players have Juve in their heart. And they have the Juventus spirit as well.

Should we get Antonio Conte as our coach, I have no doubt in my mind that Claudio Marchisio would be one of the ones to benefit. Like Conte, Marchisio is not the most talented player in the world, but he makes up for it with his tactical ability and spirit- he doesn't lose his temper like Melo, nor does he shy from a tackle like Aquilani. Should Conte be able to re-instill the grinta, the never-say-die, the winning mentality, I think we would see the impact, as Marchisio (and Chiellini and Alex) would no longer be the lone player still giving a damn at the 90th minute.

There is much to come from Claudio Marchisio's career, we have hardly seen the apex. May the next coach believe in Claudio's ability and spirit! Forza il Principino!