After a scintillating, albeit somewhat fortuitous, win last week over Roma we extended our unbeaten streak in Rome to five consecutive seasons. Tomorrow we have the opportunity to achieve another streak -- the first real "winning streak" since Fall 2009. That's right, a win over Genoa at home will mark the first time we've won three games in a row since then. Yes, it's been that long. Sad, I know, but there have been some positives as of late right now at least.

At writing, Roma and Udinese are going at it right now -- a big game for us to keep an eye on.  Things were going as good as they could at 0-0 when (surprise!) just past the 50' mark, Totti earned and converted a penalty (in other news, around the 58' mark, Totti gets into a scuffle with an Udine defender, Zapata...surprise!).  I'd certainly take this result over an Udinese win.  As long as we keep pace and make it three in a row, it's almost safer to stay 2 behind Roma, and finish the weekend 5 rather than 6 behind Udinese with 6 games and 18 potential points left to earn.

Although Giorgio Chiellini remains out with a knock, last week's switch of tactics seemed to do the trick.  The question remains whether Delneri keeps with his 4-3-3, or goes back to his old favorite 4-4-2.  My guess is the former, based on last week's results and the personnel available.  While ADP is expected to be back, he's likely to start on the bench.  Thus, it would make sense to line up with in the 4-3-3 (or 4-1-4-1, depending on how you look at it) with a midfield of Melo, Marchisio, and Aquilani, while Pepe and Krasic line up on either side of the in-form Matri in attack.

The usual issues with the defense remain, compounded by Chiellini's absence, although Bonucci and Barzagli did a decent job deputizing last week.  As far as the flanks go, in a performance that was undoubtedly the best 20-30 minutes of his season, Motta's body just couldn't hold up, while Grosso is suspended due to yellow card accumulation.  They've probably used up whatever little good karma they had remaining for this season anyway, so perhaps it's for the best.  Motta consistently struggles with mental mistakes and poor form in spite of real potential, and it's unlikely that Grosso could continue to replicate the Berlinesque performance we saw last week.  Although a tandem of Zebina -- I mean Traore -- and Sorenson (a natural center back) leave a bit to be desired, it's not as if the alternatives were much better.

I've also read that Buffon is likely to remain unavailable for tomorrow, leaving Storari back between the sticks.  After last week's performance, we could clearly do worse. 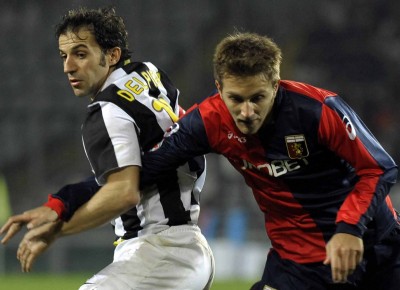 The good news on the other end is that Genoa will be without some regulars, including the fullback that got away Criscito and Veloso.  Genoa is also languishing in the middle of the table, despite some ambitious signings during the summer.  They're too far away to make a serious run at Europe, but still way safe from relegation, so luckily they have little to play for right now.

At this point, I was just about ready to provide an update to my Roma-Udinese reference.  I guess predictably, Totti made sure that I changed what I was about to write.  Udinese tied it up late on a Di Natale (surprise!) goal, and it truly looked as if they were going to take all 3 in stoppage time.  Before I had time to clutch my left arm, I realized that the referee indeed also noticed that Asamoah put the ball into the net with his hand, waving off what would've been a late winner for Udinese.  Just seconds later, on the other end of the pitch, Totti put Roma ahead 2-1 with no time left.  Game over.

Tomorrow is an opportunity to continue to chip away towards the top.  The ball is on our pitch, let's hope we can make something out of this.