Share All sharing options for: In Bocca al Lupo... 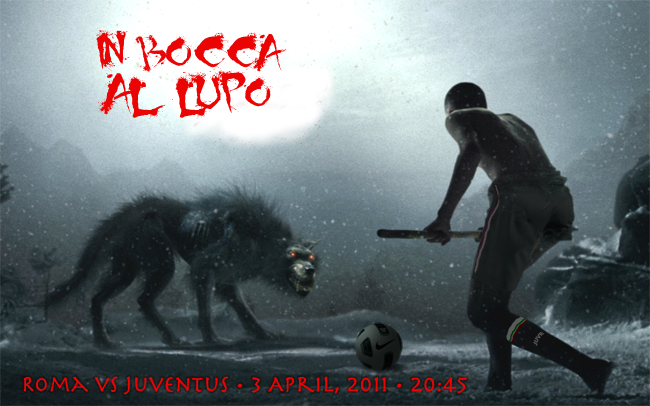 Hell of a way to wish someone luck, no?

As I sit and watch the Derby della Madoninna, I find it easy to reflect and think about what it must be like to be a fan of one of the Milan teams. Despite the players and coaches downplaying this all week, this game will certainly be decisive as to which team team wins the Scudetto. Any tifoso must be on pins and needles.

If you’re a fan of Juventus or Roma, however…well, you don’t have that problem.  In fact, if you're like me, you've forgotten what that even feels like.  At this point, both teams are languishing in a sort of purgatory: their squads that are just short of complete, and they’re both stuck in this spot where neither are elite, nor are they mid-table.

Although neither are fighting for the Scudetto, that doesn’t diminish the gravity of the match tomorrow.  With Roma and Juventus 6 and 11 points out of a Champions League spot, respectively, tomorrow will determine whether either squad have a reasonable chance to play with Europe’s elite next year.  Make no mistake – Roma is certainly in a better position.  Saying that Juventus have an uphill battle is an understatement.  I'm not delusional, and not for a second stating that I believe a win tomorrow will put us back within a reasonable chance to make the Champions League.  Come see me in a month from now, and show me what the table looks like then.

If you're more optimistic than I am, well, first of all, you're probably not Italian.  However, if you're Gigi Delneri, you have a reason to at least need to pretend to be, and tomorrow could prove to be a turning point.  While a longshot, a win would at least provide a glimmer of hope for a top four finish.  It would also be a big blow to Roma.

With that in mind, I’m expecting a pretty wide-open game.  Roma will be coming out with guns blazing, desperate for a win.  I think the same will be true for Juventus.  As the podcasters astutely noted, Roma may have equally bad or worse wingbacks than Juventus.  That says something.  At any rate, Juventus were handed a big blow this week, as Giorgio Chiellini will be sidelined, as will the one bright spot as of late, Alessandro Del Piero.  The injuries to Paolo De Ceglie and Fabio Quagliarella were bad enough, and things couldn’t possibly get worse.  Right?

Well, it was reported today that Leonardo Bonucci and Claudio Marchisio have had to leave training for different knocks.  Great.

At least neither injury seems serious, and both players were still included with the squad.

One question that remains is what lineup and formation Delneri will use.    Tuttomercatoweb is predicting Delneri’s standard-issue 4-4-2 , with a lineup including Grygera and (gulp) Grosso as the wingbacks, with Matri and Toni up top.  However, Tuttosport predicts  a switch to a 4-3-3, ala the game against Cagliari.  Their version includes Sorenson and (Jesus!) Grosso in the back, with a midfield made up of Marchisio, Aquilani, and Melo, and a trident of Pepe, Matri, and Krasic in attack.

In Italian, we say “in bocca al lupo” – literally “in a wolf’s mouth” – in order to say “good luck.”  As it stands, tomorrow our beloved Old Lady will be staring 11 wolves in the face.  She may need a little luck yet.

(Big thanks to Sposato al Nemico for the artwork.  It’s one of my favorite ones yet)