Being a relatively young chap, I enjoy carousing late into the evening, and I enjoy my sleep. As I live over here in the New World, many Juventus games unfortunately conflict with this arrangement, but thankfully, in this day and age it isn't a problem to catch a replay of the match. There are some days I regret not waking up and catching the match live, enjoying it with everyone across the world. This grudge match with Fiorentina was not one of them. 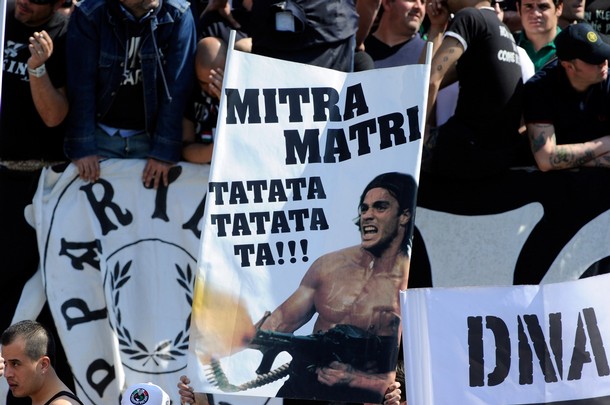 It was a relatively sterile match, surprising for Fiorentina-Juventus, which usually brings out the hostility and ill-temper in everyone. (Some Fiorentina fans maintained it with racist chants against Melo, and pro-Heysel songs) Neither team looked particularly fired up for the match, and neither looked like they wanted desperately to win. Utterly strange.

So are there any positives from this? Sure, some. The defense stepped up quite a bit, Bonucci had Gilardino in his pocket for much of the game- he's quite skilled at marking target-men, tricky fast players tend to bother him. Even Motta and Grosso put in decent shifts. We had a few good opportunities on net that had we converted, we'd be talking about a solid 1-0 win in hostile territory.

The Juve locker room pre-match. Aside from Storari making Toni laugh, everyone just kind of goes about their business

Buffon: 6- Another day in the office. Little to do for San Gigi.

Motta: 6- Held his own surprisingly well against Pasqual and Vargas. Delneri said he was the best player on the pitch, which is absurd. Maybe to boost his confidence? Who cares. He's here for the next 6 weeks, and that's it. Sorensen should be playing.
Bonucci: 6.5- Had Gilardino marked tightly for most of the game, came close to scoring. Looked like the Leo of the fall.
Barzagli: 6.5- Also did well when required to mark Gilardino, a strong defensive performance.
Grosso: 6- It seems our back-up left-backs can't cross for shit. And that's De Ceglie's strong point. Good defensively, but nothing got to Matri. 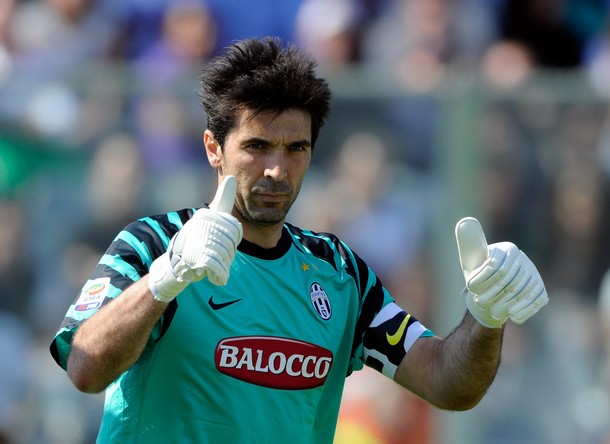 "Who has sweet hair? This guy."

Marchisio: 6- Won a lot of balls and worked very hard. Wasn't able to contribute much offensively.
Aquilani: 5.5- Often double-marked, bypassed often by Viola's wingplay, had little impact on the game.
Felipe Melo: 6.5- Jeered by the crowd, subjected to racist chants, Melo was impeccable again in protecting the defense. He's been superbly consistent this season.

Pepe: 5- Never was able to beat his man or deliver a good ball. Crowded out by the Viola.
Matri: 5- Isolated. It was obvious- the 4-3-3 hasn't worked offensively, I picked that out last week. Matri was offside too much, but starved of service.
Krasic: 4.5- Another very disappointing display. Didn't ever trouble Fiorentina. At this point last season, Diego was roundly being called an epic flop, despite continuing to deliver assists. Krasic has been even more poor since January. 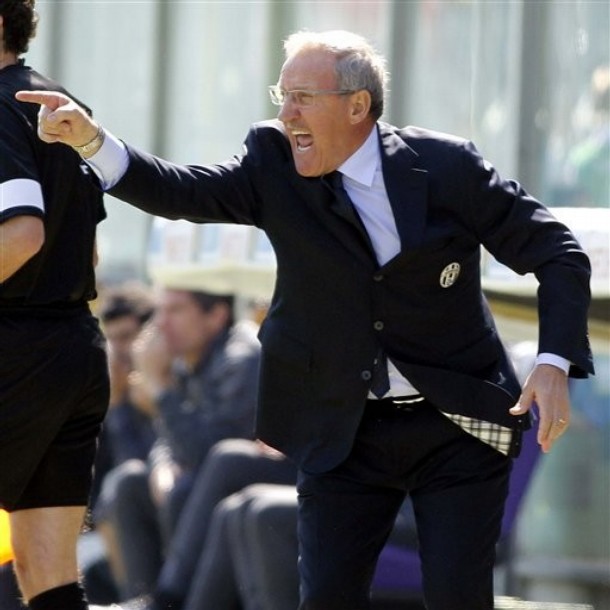 Delneri: 6- It wasn't a defensive formation, but it was a defensive performance. Team was cagey. The 4-3-3 didn't work, again, as far as offense goes. It seems we can't ever get both sides of the pitch to work- either we are great offensively and we're terrible defensively, or vice versa.
Sorensen: 6.5- This surprised me- most pagelle ratings from other sites did not give Freddy a very good rating. I thought he was fantastic, well positioned and always making great challenges. Stupid yellow card, but he was plenty calm afterwords.
Del Piero: 6.5- Livened the attack up. A 4-4-2 with ADP/Matri back is a must, compared to this 4-3-3.
Toni: 6- Did rather well in his cameo, better than Matri, but he had the fortune of playing alongside Alex.

#1- The 4-5-1/4-3-3 is not a panacea: Said it last week. We saw it again, this week. The team didn't look hungry for the victory, but it wouldn't have mattered much if we did considering how disjointed our attack was.
#2- Felipe Melo racially abused by Fiorentina fans, Viola fans start Heysel chant, zero action: It's only racist if Juve does it, as Balotelli proved. It wasn't racist nor necessary to take action when Chievo or Udinese fans abused Balotelli, but dear God, shut the city of Torino down because there are some racist imbeciles in the Juventus curva! A few morons in the Viola Curva made racist chants at Melo when he fouled Montolivo, but the FIGC doesn't care. Nor does it become a national debate. I'm not even going to get into the umpteenth pro-Liverpool/Heysel display... 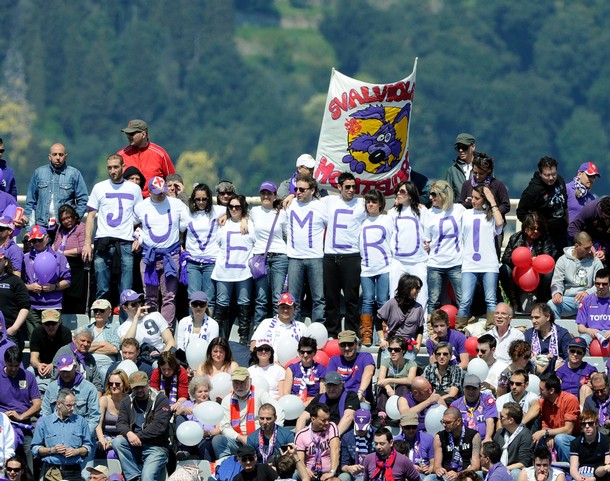 Class acts, all of you

#3- Fiorentina are the new Torino: Little chance of making into the Champion's League without Prandelli, they've resorted to two campaign goals: avoiding relegation, and raining on Juve's parade. Sounds like a team we used to know...
#4- Selling Amauri for 5.5mil won't even result in a financial loss: While recording "It Ain't Over" last night with the guys, I came to a startling realization- Under a simple accounting method for amortization, we technically won't sell him for a loss if we manage that amount. Under straight-line depreciation, you adjust his book value down every year, rather than mark him as a 23mil cost in the first year, it's adjusted. His value after 3 years? About 5.5-6mil. That said- 33.5mil altogether including his salary for 17 league goals results in 1.97mil per goal. Iaquinta, who everyone says is worthless? 11mil transfer, 7.5mil salary (with one year more) so 18.5mil for 30 league goals, or 616,000 per goal.
#5- Alberto Aquilani becomes a father: Early today, his girlfriend Michela Quattrociocche gave birth to their daughter, Aurora. If you have never searched Google Images for his girlfriend, do so now.
#6- Team Eats: Bruschetta. Yummy. 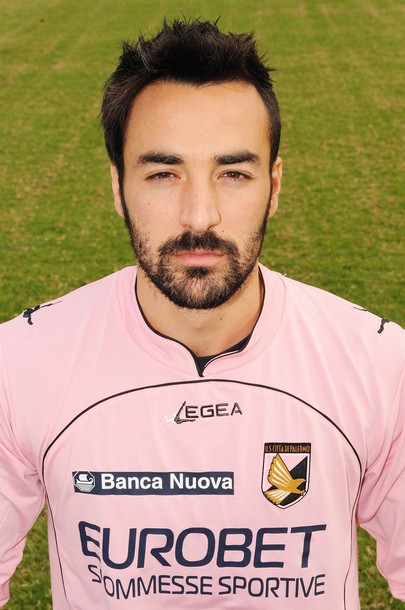 This Week in Cassani Watch:

Positives: Mattia looked good out there. Zamparini is still insane. 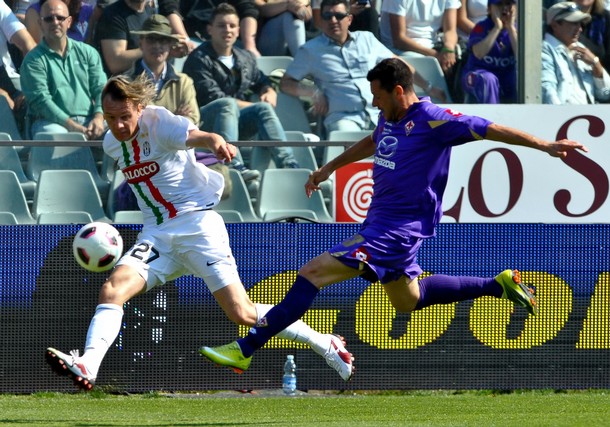 THE JUVENTUS OFFSIDE SHITLIST
- Catania: You sold us Jorge Martinez for 12mil, and couldn't even hold back Lazio for us? There's only one way to get off the shitlist for next week, Argentina B, and that's to take a thrashing at the Stadio Olimpico.
- Vincenzo Iaquinta: (Seasonal)
- Milos Krasic: Didn't want to do this, but he deserves it, and probably should have been put on here earlier. In very poor form.
- Marco Motta: (4 weeks) On-off, on-off. At least it's better than earlier this season when his form was off-off-off-off-off
- Parma: Ha! Well played, Parma. One week after I threw your entire team on there due to inability to beat Lazio, you end Inter's Scudetto hopes by beating them 2-0 through Amauri and Giovinco. Well done.
- Jonathan Zebina: (Lifetime Award)