It's Saturday night, pizza is on our brand new stone and in the oven, a goblet of red wine is within arm's length, the Yankees and Red Bulls are taking turns on a soft-volumed flatscreen, and I couldn't be happier. Roma lost. Inter lost. Obviously, the former helps. I'm neither particularly optimistic, nor am I prepared to seriously discuss the c-word yet, but if you've been reading anything I've written, you'd know that it's on my mind. The latter is inconsequential for our purposes right now, but anytime Inter wins, God kills a puppy. Right now, things are calm.

Tomorrow morning this very room will feel like a cauldren of tension.  There won't be red wine at 9:30 a.m., but I'm sure I'll want to pour scotch.  Why does Fiorentina -- no matter how crappy of a season they're having -- always step it up against Juventus?  They're in a similar situation as Genoa last week.  Fiorentina are stuck in 11th place, currently 3 points ahead of them.  They have nothing to play for.  But you know...just know...it's going to be one of those games.  I know it.  I'm going to be in a bad mood anyway, because it will be Sunday morning and I'll be awake by 9 a.m.  I predict lots of cursing in Itanglish.

Alberto Santana is out for tomorrow.  While his injury is less serious than originally thought, he won't be a factor against us.

De Ceglie Watch:  I've been reading this week that De Ceglie is practicing with the squad.  I thought there was a chance that he'd be included in the matchday squad last week, but that didn't happen.  We'll see.  Otherwise...

Grosso returns.  2006 ended when it became 2007, so this normally wouldn't be considered "good news."  But if he could duplicate his performance against Roma two weeks ago -- an enormous "if" -- then obviously we'll be in okay shape.  And I'll go tanning.

Ma-ta-ta-ta-ta-ta-ta-tri!!!!  Alessandro Matri is completely smoldering right now.  4 goals in 4 games.  Tomorrow we're going for our 4th win in a row.  Coincidence?  Absolutely.  Still, his form doesn't lie.  If Delneri plays a 4-3-3 again, and it doesn't revert to a 4-5-1 leaving Matri isolated, I like the odds of him keeping it up.

In case of emergency, break glass.  Just as last week, Luca Toni will remain lurking on the bench.  He scored against Genoa, and it wasn't with his head.  I was floored and happy for many reasons.  #1, Aaron got to post the song.  #2, he scored a goal and it wasn't with his head.  I still can't get over it.  #3, (duh) it was the winning goal.  I hated completely detested the signing last January.  I was never a Luca Toni fan.  I always found him slow, lumbering, almost clumsy, even when he was at his peak.  But the man scores goals.  He's not the assassin he was when Bayern Munich lured him over from Firenze a  few years ago, but I think the podcast guys are right:  if he was brought in to be Amauri's replacement, playing primarily from the bench, it's not a bad deal.  Having him in case of emergency behind the glass right now isn't the worst thing.  We saw that last week. 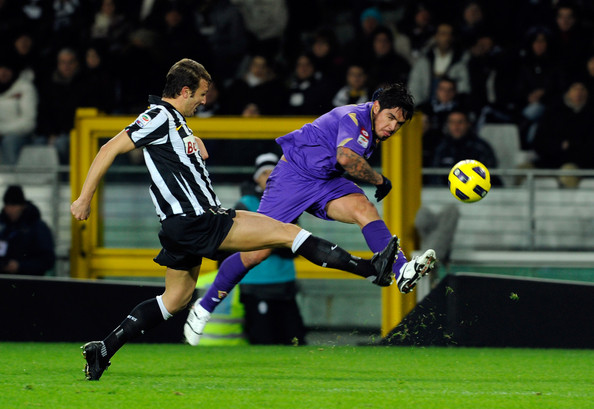 What could possibly go wrong?

And, as I've said before: it's Juve/Fiorentina.  Fiorentina could be playing with their primavera team, and for some reason they would give us trouble.  It is what it is.

Editor's note: I'm amending the first part of this.  My wife must have been doing her best Alessio Secco impersonation when she bought this pizza stone, because it's a complete bust.  I could be happier right now.  On to tomorrow.