Juventus and Bad Chinese Food: Fighting back at Lunchtime

Share All sharing options for: Juventus and Bad Chinese Food: Fighting back at Lunchtime

I hate the lunchtime kickoff. Italians hate it. The Pope hates it. Who likes it? Juve, I suppose. Genoa became the second team that we have defeated in both legs of the league (after Cagliari) succumbing both times...and both at lunch. Om nom nom. 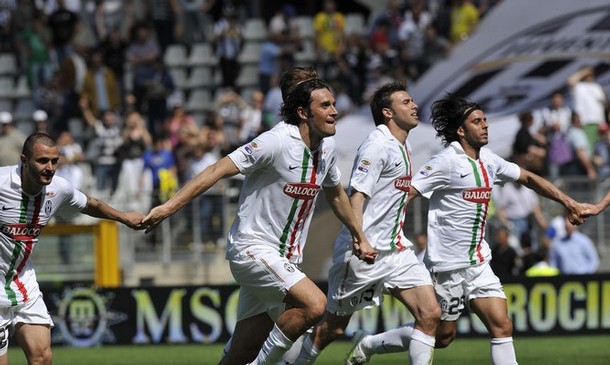 What a game, right? It had everything in it for a neutral- plenty of goals, two own goals, shifting leads, attacking football, atrocious defending, it must have been an entertaining match for someone with no stake in it. For a fan, it was a heart attack. When Luca Toni subbed on and changed the match, my head exploded. Grosso and Toni winning MOTM in consecutive weeks, is it the march of the World Cup winners? Or just washed up talent putting in a good shift or two. I fully expect Barzagli to put in a great performance next week, although he could qualify for both, maybe Salihamidzic can score a brace to confirm the latter. Or Maybe Buffon can score a winning header against Fiorentina, that would be lovely.

The game was strange, and there's a lot of situations where I just don't really know what to say. The defense, for one. They were shambolic. They were awful. Yet Marco Storari barely had anything to do. Or Aquilani. I didn't particularly like his performance, but he had two assists and a 92% pass completion record. I don't think I'm going to try and understand it- Luca Toni scores and has an assist. Juve claw back for the first time since beating Genoa...3-2 at home a year ago, and Juve ends up winning 3 games in a row. It's the twilight zone, and we all know- you cannot rationally analyze the twilight zone. 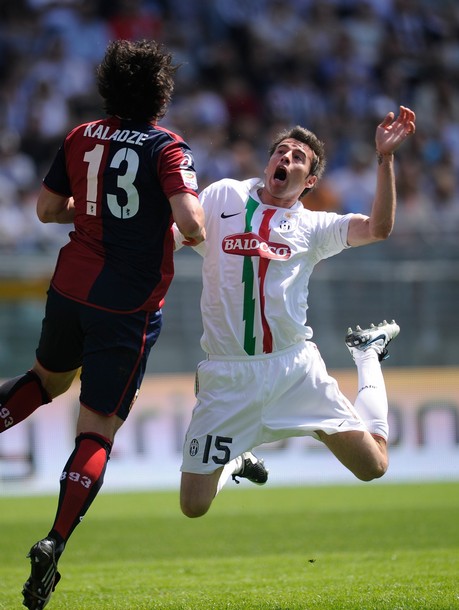 Storari: 6.5- A few Italian sites gave him a s.v. for no rating, since he had so little to do. Couldn't do anything on either of the goals, the first of course a freak deflection from Bonucci, and the second, a well placed volley from Floro Flores. What I did like about Storari was he really commanded his area well, always secure when claiming the ball, two things San Gigi hasn't done too well recently. And a defense of Motta-Bonucci-Barzagli-Traore? Own goal aside, it's stunning we only conceded one.

Motta: 4.5- We all knew it was coming. From last week's review- "Funny as hell that Grosso and Motta have decent games, and neither of them have the opportunity to repeat it next week- Grosso is suspended for yellow card accumulation, and Motta of course was injured. I don’t think either of them would have had a good game against Genoa anyways, so it’s a blessing both happened. I nearly threw my laptop out the window when I saw them lining up against Roma. One good performance doesn’t change the fact that they’re both shit and need to leave this summer. Picked apart time and time again.
Bonucci: 5- A very disappointing performance from Leonardo, who has been in poor form for much of the Spring. However, that's to expected- he needs more playing time, not less. Let's not forget, this is his 2nd season in Serie A, and going from Bari to Juve is a big jump. He will make mistakes, yes, but at the beginning of the season we knew we had a talented, though very inexperienced young player. I've heard a few comments of "sell Bonucci" which I assume were in the heat of the moment, but utterly pointless. Was shaky in the first have especially positionally- I think covering for Motta and his own goal badly affected him.
Barzagli: 6- Aside from losing Floro Flores for his goal, Andrea had a relatively composed match at the back. A fairly trustworthy 3rd-choice center back, let's hope we never have to see his Palermo form.
Traore: 5.5- Story of his Juve career- he runs and runs, and doesn't make and horrible mistakes, although Genoa didn't attack much down his flank. But did he do anything useful? Not really.

Marchisio: 6- A reliable performance as always, and when Melo subbed off, he really grew into his role.
Melo: 6.5- Somnath picked it out perfectly in the comments- Has Melo ever had a bad game this season? (Parma aside) For the man who epitomized the emotional inconsistency of last season, Melo has been tremendous thus far. Dealt with an injury for much of the match and did well.
Aquilani: 6- I didn't think he played too well for much of the match, but he had two assists, whether either of them were intended or not, they count. Better than Roma, but still not back to his usual self. 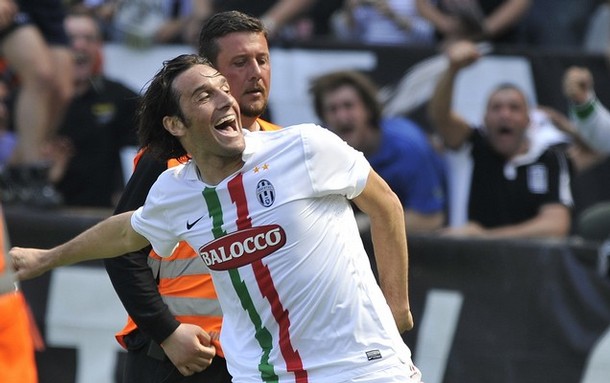 Pepe: 7- Whoa Simone. You've been playing your ass off the last little while. Very attacking performance, and while he fails to finish like a striker, he caused Genoa plenty of problems. Unlucky not to get on the scoresheet.
Matri: 6.5- We needed a striker who scored. Did anyone think Matri would be this prolific? I thought he was a great player but I never thought he'd start his Juve career like this. Don't think the single-striker formation suits him that well, but his versatility means he still puts in a good shift, scored a very nice goal. Aleaaaaaaandroo.
Krasic: 5.5- Looked rather tired, again. It was hot at the lunchtime kickoff and perhaps the heat fatigued him. Didn't ever beat his man, wasn't too dangerous. Luckily, Matri and Pepe compensated.

Delneri: 6.5- In the fall, we often said Delneri gets his team ready from minute one, but subbed/read the game poorly. Not in the last few weeks. The first half has been very shaky defensively, and hasn't been clicking offensively. He changed it tactically with smart subs. Now to get us starting well.
Sorensen: 6- Why is this kid not starting more?
Toni: 7- Came in and changed the game, with an excellent assist and a well-taken goal to win the game. Should have scored late in the game to kill it.
Martinez: s.v- Recovered a few balls, but little of note. And nothing to change our reputation of him, unfortunately.

#1- The 4-5-1/4-3-3 is not a panacea: I said last week I wasn't terribly impressed with the formation switch, and this confirmed it. It doesn't work that great offensively, particularly for Matri though he keeps scoring. Against Roma, we were shaky in the first half (like Genoa) and relied on Roma's desperation and Mexes' injury to start scoring. I'm fine with continuing to play it, because I think Pepe and Krasic can thrive in it, but Matri isn't too comfortable playing as a lone striker. Luckily his extreme versatility means he can still capably play there.

#2- The defense is shambolic, still: Positionally, we were all over the place. The only person to put in a good performance was Barzagli, and I'd call that more "satisfactory" than good. How did Storari have so little to do? Motta is still dreadful (not just his haircut) and he's killing Bonucci positionally. Needs to be sorted out.

#3- The 4-5-1/4-3-3 creates a lovely midfield, though: So the offense is mediocre, the defense crap (not due to the formation) but the midfield is beautiful. Melo-Aquilani-Marchisio is an ideal 3-man midfield, with a mediano, a regista, and a pure centrale. If we had this midfield behind Diego last year...

#4- Luca Toni comes in, doesn't ruin Matri: Back in February we had some dreadful games where fielding Toni as a "target-man" forced Matri into a wide or very deep position, with disastrous results. Toni was isolated, fell over too quickly, and Matri was way too far away from the goal to ever be a threat. Toni came in yesterday and probably per Delneri's instruction, changed his game, and Matri stayed closer. (I assume so because after a few games of that failing, that's when Delneri dropped Toni indefinitely, he knew itw asn't working) It was a decent partnership, it helped that Toni was in great form. It's too bad Van Gaal isn't sacked every weekend, and/or Toni playing one of his ex's. (The latter is possible)

#5- Team Eats: It's back! With Genoa, it's easy. PESTOOOO. Pesto on chicken linguine, to be specific. Somehow my father hates it, but I love pesto. I love pesto on pancakes. I love it on pizza. And I take some pesto and put a little bit in my hair when I've had a rough week. What do you think holds it up, slick? 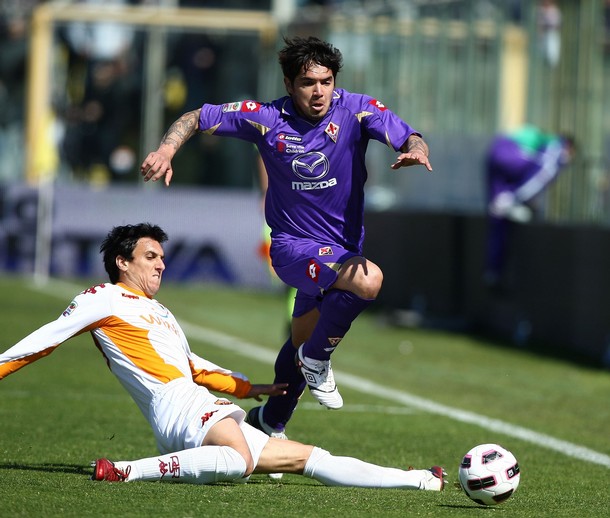 #6- Buffon's back is worrying me: Juventus and his agent insist that the recent flaring up of his back is unrelated to the surgery last year, although it took quite a while for them to admit he had a back problem to begin with. Should it be serious, or should they actually be considering selling Gigi, there's plenty of reasons they'd want to keep quiet on how bad it could be. If this is going to be a reoccurring issue as it has been for the last few years, what should we do?

#8- THE CHAMPYIONNNS: SHHHH. Don't even talk about it.

#8- This Week in Cassani Watch:
Negatives: Palermo's Delio Rossi returns, much loved by his players including Mattia.
Positives: Rossi is only temporarily back, Palermo gave up 2 in stoppages.

THE JUVENTUS OFFSIDE SHITLIST
- Jonathan Zebina: (Lifetime Award)
- Marco Motta: (3 weeks) That was expected.
- Vincenzo Iaquinta: (Seasonal)
- Parma: Amauri and Giovinco, you suck. We needed you to peel some points off Lazio to move us towards 4th more, and oh yeah, you might want to be careful about that relegation matter.

Oh and one more time for good measure...