During Wednesday's round of international friendlies, Italy coach Cesare Prandelli chose to start the match with our own Principe, Alberto Aquilani, in a trequartista role. It was largely an experimental lineup, and before the match ended, Alberto was subbed out of what has become an atypically poor performance by Aquilani.

The obvious bit to take away from Wednesday is that, perhaps, a trequartista he is not.

At Juventus, things are different.  We are all used to Aquilani deployed in a deep-lying, playmaking role, a classic regista.  Juventus don't currently play with a classic trequartista (see Diego).  These days they don't need a trequartista anyway, particularly with the rigidity in which Gigi Delneri employs his 4-4-2.  The only spot for a trequartista is that of a second striker, or in a slightly modified 4-4-1-1 (kind of where he employed Diego in the few games he played in the summer). 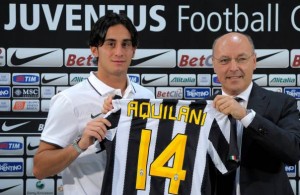 I digress; this post is not about the best position for him.  That, I feel, has been established.  Rather there's a much larger elephant in the room.

Since the turn of the New Year, before things began going south for the team at large, loomed the issue of Aquilani's loan agreement between Liverpool and Juventus.  The option to make it permanent is fixed 16 million Euros, and Liverpool have shown little willingness to discuss a discount.  Just today, his agent indicated that the price is set as is, and it's up to Juventus to make the deal permanent.  With a slight dip in form since the beginning of the second half of the season, it no longer seems a fait accompli that Juventus will pick up that option for that price.

Particularly with something that may have been thought as unthinkable a year or two ago -- the prospect of a free Andrea Pirlo.

Sure, Pirlo is set to turn 32 in May, and has struggled battling injuries this season.  However, at 26, it's not as if Aquilani hasn't had his share of injury problems.  With Pirlo's style of play it isn't unreasonable to believe that he could still provide two more quality years for a top-level team.  This proposition becomes more interesting considering the fact that Juve currently have on-loan Albin Ekdal and Manuel Giandonato both waiting in the wings as understudies for that regista role.  There is probably no better person to learn from than someone with the level of Pirlo's experience.

It potentially makes sense for Pirlo as well.  He would benefit from not having to be overworked from both a Champions League and full Serie A load.  Back to our Old Lady, with no Champions League and thus less revenue, those 16 million Euros could may be better spent elsewhere.  This is particularly true if Champions League football is next season's goal, considering now that Italy lost a spot to Germany and nothing less than a 3rd place showing will do.

Circle back to the holes that need to be filled currently: two to three competent fullbacks (dependant on whether Paolo De Ceglie is able to come back and can replicate his early season form) are a priority.  If Sissoko does go, we could use another defensive midfielder.  And of course, there seems to always be talk of adding another striker.  Alessandro Del Piero is a legend, and last week against Brescia he showed what an impact player he could be.  Unfortunately, time is a bitch and 90 minutes per week will be too much to ask.  I imagine that Quagliarella will be back, but he will also come at a cost; don't forget his contract is another loan with a right of redemption.  Plus, recovering from a serious knee injury, there is no certainty that he will be 100% right away.  Speaking of injuries, Vincenzo Iaquinta hasn't been the same player since last year's injury struggles, and Luca Toni has been a shell of himself since the end of his first season at Bayern.  It is true that Alessandro Matri has been delivering, but the form that we're witnessing is the first of it that he's ever shown in his career.

When Juve signed got Aquilani, I was ecstatic.  He was the missing link.  Alright, fine, one of the missing links, aside from at least two decent fullbacks.  So he was the third missing link.  At any rate, a natural trequartista like Diego would've been far better served with a regista playing behind him (and two competent fullbacks).  Now there is no trequartista, but that does not diminish the overall value of a true midfield maestro.  However, considering all of the other work that needs to be done with the team, 16 million may be a bit too many eggs for one basket.  That is not easy to admit, particularly in light of the rebound season that he's had for Juventus.  I would not be saying this if not for the fact that there are actual viable alternatives.

Pirlo arguably has 2 good years left in him.  He could potentially help the team groom his predecessor, help them get back into the Champions League contention, and thus earn more revenue that we can spend on his replacement.

If we can get Pirlo for free, I'd say go for it, and if it means sacrificing Aquilani, such is life.  Decisions like these will never be easy.

However -- if Liverpool's current tough-guy attitude is merely posturing, and they eventually become willing to negotiate a lower price, then certainly the conversation changes.

And if, a perfect storm brews -- whereby Pirlo no longer becomes an option for one reason or another, Liverpool remain steadfast, and Juventus can find a way to pay the full sum and plug other holes -- that wouldn't be the worst thing ever.  However, it's important for any party in a negotiation to take note of the total landscape and all of the options available.  A team could do worse than the scenario which I've described above.