The Case For Delneri's Dismissal

Share All sharing options for: The Case For Delneri's Dismissal

Despite Matri’s double sparking the traveling tifosi to chant the chorus of one of Lady Gaga’s recent singles, Delneri’s team was unable to secure the victory with ten men against a spirited Cesena leaving the Bianconeri unchanged in seventh place, eleven points adrift from a Champions League position. With a tight pack right behind Juventus, calls for Luigi’s removal will undoubtedly grow even louder should the team lose any more footing within the league standings and rightfully so.

Recently, as the media has correctly noted, Juventus’ board of directors and Exor leadership have reinforced their support in Delneri during this tumultuous period. Going back to 2010 when Luigi signed a two-year contract, of which the details weren’t disclosed, one could reasonably assume that it contained certain objectives the same way many player contracts are structured. Thus, it wouldn’t be hard to imagine that the very same ‘support’ recently provided by the upper brass will be under review at the end of his first season in charge.

"The thought of being sacked hasn’t crossed my mind, and it won’t, even if we lose to Cesena. I’ll get us through this tough period. We know that we can’t slip up and my hope is that the team goes out tomorrow with the right mentality and will to win. I’m close to Andrea Agnelli and just yesterday we lunched together. My chances of being confirmed in the job for next year? It depends on results. I have great respect for this club and believe that it will regain its esteemed status. My future? I’m not sure about that, but I have the strength and the will to carry on and get us to where we all want to be. I am content right now". -Delneri

Speaking of results, they certainly haven’t happened for Delneri yet as Juventus is sitting in the same position we finished last season. With regards to overall points, and only nine games remaining, Delneri has to find at least thirteen points if he wishes to quantifiably say that the Bianconeri have improved under his leadership compared to last year; albeit by the slimmest of margins. Of course, that might be easier said than done since in the last twelve games we’ve managed eleven points for a dismal record of three wins, two draws, and seven losses. 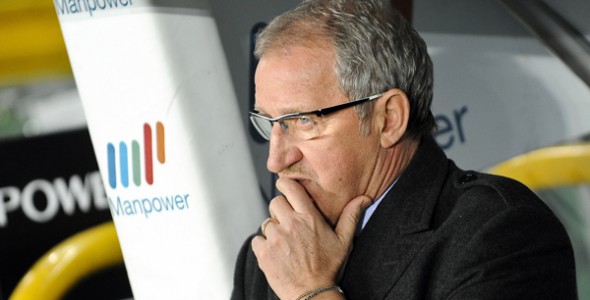 Undoubtedly there are many people who support Delneri, and wish to see him continue his work within the confines of the newly constructed Stadio delle Alpi. For one, he (and Marotta) inherited a ton of shit from the previous management. Secondly, the process of forming a cohesive unit takes time and with so many new faces this year perhaps it was a little presumptuous to assume an improvement so soon. But was the preseason objective of fourth place such a lofty goal, even with the injuries this team suffered? Seeing as we’re currently three places shy of the prospect of European revenue next year, it certainly looks that way. But things should have been different this time around.

Football is often unpredictable, however four weeks ago, it should have been much less so. After a hard-fought victory at home against Inter, Delneri fielded the exact same line-up against relegation side Lecce to dramatically different results. In what could have been the perfect springboard fixture to turn Juventus’ fortunes around, the Bianconeri looked as lost as ever. Was it Delneri’s mental miscalculation or growing pains stemming from last year’s campaign? The fact of the matter is, with so many new players brought in last summer by the new regime, the argument of 2009-2010 mental landmines holds less water.

Keeping Delneri on until the end of this season makes sense for a couple reasons. For one, Juventus fans, and even the players perhaps, have already accepted the likelihood of no European football next year so his sometimes irrational substitutions can do no more harm. Secondly, the coaches currently looking for employment aren't much better. However, come June, Agnelli would do well to try and secure the services of a world-class manager that can align himself with the foundations of this team already set in place, but more importantly, provide that extra leap in quality regarding the team’s psychology.