Share All sharing options for: Amauri Scored! Is This...Is This Real Life?

The month of January was truly messy, heartbreaking and especially nerve-wrecking for Juve fans. A disastrous Olimpico performance against Juve's Rejects+Giovinco Parma kick-started a series of disappointing events that saw the same Bianconero team that ended 2010 on a positive streak spanning 18 games and oh-so-close to second place tally up a mere 7 points in 7 games.

As if the general lack of fighting spirit and under-performing of the squad was not enough, Quagliarella's nearly season-ending injury, Melo's umpteenth momentary loss of reason and the Coppa Italia elimination made sure that the dagger shot by lady luck in the direction of Juventini hearts worldwide would get dug deeper. In the 7 games played in the month of January, Juventus was only able to score a miserable total of 6 goals, a pathetic statistic for a team that had consistently found the back of the opponent's net fairly easily up until the break. More alarmingly, only 1/6 goals scored was by a striker and it came thanks to a brilliant free kick by the ever-reliable, yet 36 year old Del Piero.

With a newly acquired but seemingly finished Toni, a Martinez still recuperating from the injury obtained against Milan, an incessantly injured Iaquinta and a Del Piero who can unfortunately no longer be considered a focal point in attack, the striking duties were once again indirectly placed upon Amauri's frail, grouchy and grease-covered shoulders. Il Bidone, the 21st Century ESNAIDER John Charles or the Brazilian Bogdani as some call him embraced the enormous challenge lying ahead of him and did what only he can do best: suck enough to cause millions of Bianconeri to be on a regular, 24 hour long, post-game suicide watch. The club's apparent financial impotence, lack of immediate purchasing power and Amauri's constant refusals to go and fail somewhere else made everything seem awfully grim. How much longer would Juve fans have to put up with Whiny Mannequin Extraordinaire? This tunnel didn't seem to have light at the end of it...

...until San Pietro Leonardi di Parma made a miracle happen! 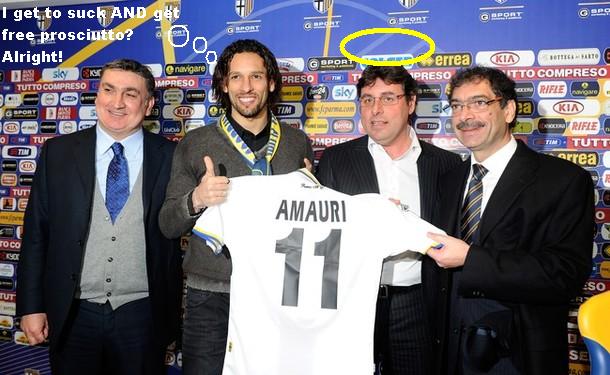 As we all know, Parma loaned Amauri from Juventus for the remainder of the season on the very last day of the mercato, allowing for Alessandro Matri to replace him (pretty successfully so far too) also on loan. Amauri immediately hit back at his old club by claiming that he was at Parma to finally find his long lost goalscoring form and even suggested that he was used as a scapegoat for Juve's weak offensive displays. His first game as a Gialloblu was nothing to write home about and the second wasn't looking any better until the impossible, what had not happened for 51 weeks, happened:

I have yet to figure out how that went in and I'd be lying if I said I didn't rage for a split second when I first saw Amauri's ballistic masterpiece. Only for a second however, as I made sure to wash it down with this gem while ultimately realizing that despite his goal today, nothing of value was lost:

Matri, bitches (sorry Aaron, I had to!).