Share All sharing options for: PREVIEW : Juventus vs. Bologna

After the debacle against Lecce last week, the pressure is on Juventus to bounce back at home against Bologna this Saturday. Bianconeri Champions League qualification ambitions took a huge blow at the Via del Mare but more dropped points against Bologna will surely leave them hanging by a thread. Another loss will have a huge effect on the mentality of the squad and it would be hard for a team so lacking in confidence to make up a possible 10 point deficit to Lazio.

Thankfully Bologna have had their own problems this season and have been poor on their travels, just 10 points from 39 on the road. Ex-Juve man Marco Di Vaio will prove the main threat, I’d argue he’s carried the club for the last few seasons. Young Ekdal isn’t available though.

It looks like Del Neri is going to make several changes to the lineup with Storari replacing Buffon after his red-card last week, Marchisio moving into the middle to cover Aquilani’s recent injury, with Martinez (or possibly Pepe) taking his berth on the left. Del Neri has to be careful about changing the defence around too frequently and I think a Barzagli/Bonucci centre partnership will prevail despite rumours of a reshuffle. One possible change though could be a straight replacement of Sorensen with Grygera. So it appears that Del Neri will revert to a 4-4-2/4-2-4 rather than the lop-sided 4-3-3 with Krasic and Marchisio on the wings. 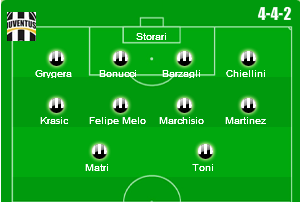 I don’t understand why Marotta was so was eager to spend €12m on Martinez only for Del Neri to seemingly decide he wasn’t good enough. Even taking into account his injury problems, 3 starts and 5 substitute appearances this season seems like a bit of a waste, especially as subbing him on for Marchisio (or Aquilani and moving Marchisio into the centre) would give those guys a bit of a rest. From what I’ve seen of him, he looks like a very decent squad player. Anyway, hopefully we’ll get to see a bit more of him this weekend. 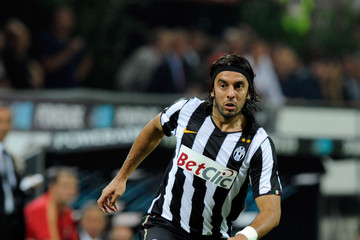 KEY AREAS
The key area for me this match is not on the pitch, but inside the heads of the Juventus players. They need to respond and produce a real performance, especially the back four. They need to be switched on and concentrating, can’t let Bologna walk through them like they let Lecce, no failed offside traps and properly deal with the ball over the top. Melo needs to impose himself and the wingers need to not only provide some service to the frontmen, but be able to keep possession in the Bologna half when any pressure needs to be eased.

PREDICTION : 2-0
The win is there for Juventus but to have a chance they need to turn up in the first place, and then some, to atone for last week. I’m going for a 2-0 win (Chiellini header from a corner and Del Piero sealing it after being subbed on) but after last week, anything could happen.