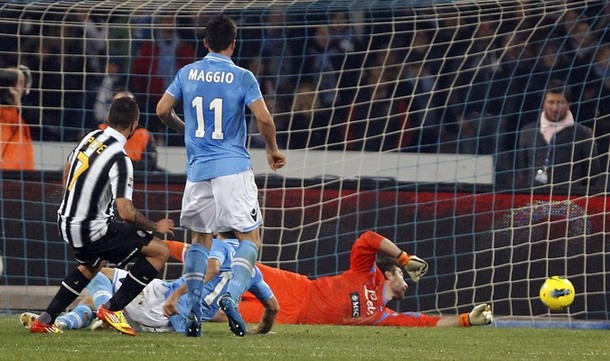 Last Saturday saw Juventus place themselves alone in first place (til yesterday, for now, at least) with a win against Lazio, before traveling a bit further south on Tuesday to face another one of those baby blues.  A Tuesday which saw one of the most dramatic performances in the post-calciopoli era – and certainly a performance which has become foreign to my eyes absent watching other teams jealously.

I remember the first week of the season watching Lazio at the San Siro versus AC Milan.  Two quick Lazio goals in succession dug  the defending Scudetto holders into a pretty deep hole against a team perpetually mentioned in the conversation as among the “big” teams on the peninsula.  Then, eight minutes later, an Antonio Cassano cut the lead in half.  Within five of that, Zlatan “Don’t –Call-Me-Shakira” Ibrahimovic made it level.

Jeez, I thought to myself.  This type of performance – the fighting back, the quick answers to the goals against, hell the entire concept of going down by one or two goals and not completely shutting down – that seems like it would never happen with Juventus.  I mean…it used to.  Not now.

I seriously had forgotten what watching a game like this felt like.  I hadn’t watched a game that I was so invested in, a game that was so exciting, a game that was so completely enthralling since Italy’s penultimate and final games in the 2006 World Cup.  Only I was far more confident in the outcome of those games than I was on Tuesday versus Napoli.

I know it sounds completely trite, but Tuesday’s game reminded me of what it felt like to be a Juventino for the first time that I can remember in a very, very – VERY – long time.   We’ve now faced Inter, Milan, Lazio and Napoli, and have captured 10 points.

Two years ago our so-called “Scudetto-contending” team’s season first started to fall apart in October against Napoli, after a 2-0 lead was squandered by Ciro Ferrara’s men.  All three points were eventually dropped, and that game would serve as a harbinger of things to come for the rest of the season.  I won’t go as far as to say that fighting back from two goal deficits not once, but twice, will have the same denouement-type-effect only in reverse.  No, there’s still too much calcio left to play.  But, man – you can’t ignore the symbolism.

Again, I hope that I’m wrong.

Oh wait, there’s a game against Cesena this week, isn’t there?

Cesena is still in the relegation zone with only nine points from twelve matches thus far.  Unfortunately, those nine points all came during the past three games.  They’re not exactly world beaters, but can boast some level of talent such as young talent Parolo, as well as Mutu who hasn’t failed a drug test in what, a year now?  Good job.

Bad news: We dodged a bullet last week, but for the first time we're going to have to learn what it's like to do without Pirlo for real. After accumulating his fourth yellow card of the season on a terrible challenge which almost sunk us, he'll be suspended this weekend.  We already had a test without Marchisio, and I think it went relatively well.  Pirlo didn't have the best of games against Napoli anyway, whether due to his ability or the coach's tactics, but we still found a way to salvage a point.

Good news: Maybe I should have referred to this as the "silver lining," as since Conte is dealing with suspensions and selection issues for the first time this season, he is expected to mix things up a bit.  It makes sense -- we're playing shitty-ass Cesena this week with a few key players sitting on three yellow cards -- notably  Pepe, Vidal and Bonucci, who despite having one bad performance last week, is still a "key player" -- one round before Roma.  With that, we'll at least be able to see Chiellini shift back to the center where he belongs, and DeCeglie get another chance to show what he's made of.  If Pepe gets rested, then I wouldn't mind seeing Elia get a start up top in a 4-3-3, or perhaps a switch back to a 4-4-2 which would allow Pazienza and Marchisio to play in the center flanked by two natural wingers.  Hey, the dude had a great game during training, and has been working his ass off.  I say give him a shot, especially against a team like Cesena.  Whatever.  I have a feeling the formation will keep a front trident made up of some combination Vucinic-Matri-Quags-Krasic (okay, maybe not Meelosh).