Share All sharing options for: Round 14: When in Roma

The week kicked off with another win in league play, and continued with a rotated squad, a first Coppa match, and a little help from our principino (he's overrated though, right?). 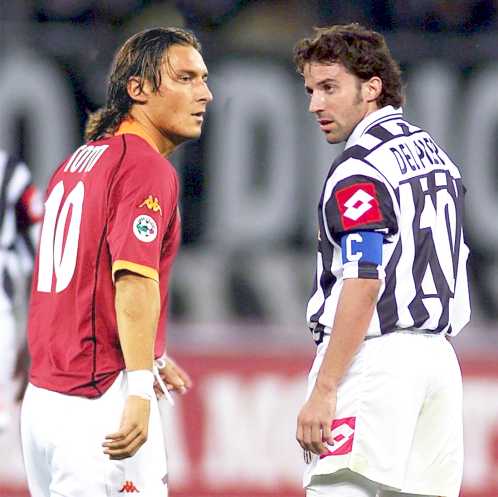 Their number 10/captain < ours.

And off to Rome we go.

Much is being made in the media about how much these two teams dislike each other.  I suppose that it's true, and I won't argue.  But for me, ain't no hatred like a hatred for Sfinter, and all other rivalries pale in comparison.  Regardless, whatever it takes to win, let's just do it.  We need to overblow the rivalry for motivation?  Have at it.  I hate you, Roma, with your stupid little red shirts that are actually burgundy, and your stupid little patch with two babies sucking from the teat of a she-wolf.  Real original.

Yes, tomorrow is a huge game.  Even if I am having difficulty fanning the flames of this rivalry, the importance of the fixture certainly can't be downplayed.  With Udinese (do they ever lose?) a point ahead of us currently, it will be important to go to Rome and make a statement.  Especially since Roma is having a few problems right now.

Good news:  Three...yes, *three* red cards picked up versus Fiorentina last week means that Roma will have to play without Juan, Fernando Gago and Bojan "I Refuse to Use Vowels Unless Absolutely Essential" Krkic are all suspended, while Kjaer, Burdisso, Pizarro and Borini are all injured.  Totti remained on the bench last week, but now that he's back to full fitness, I'll expect him to play, while De Rossi might have to play as a makeshift center back again in light of all the thinned-out squad.

On our end, I'm expecting much of the same non-coppa lineup.  While Elia played well in assisting Marchisio's winning goal last Thursday, expect him to start from the bench, while Giorgio Chiellini is likely to once again start at left back, to my chagrin.  Grrr.  Mirko Vucinic remains out til at least the end of 2011.

Le Chiavi:  Luis Enrique likes to play a possession-based, smooth passing game, not all that dissimilar to Conte's preferred system.  However, it's easier said than done with so many regulars unavailable.  Football-Italia has Roma lined up as so, in a narrow 4-3-1-2, notably with Taddei terzinoed (ala my dreams about Simone Pepe, at least until Matteo Liviero is ready for the first team, but I digress), and Heinze at center back.  If that is the case, expect our biggest asset -- our ability to stretch the field wide with a plethora of tricky wingers at our disposal -- to be our key to victory.  If we can hold onto the ball, use the whole field, and incisively attack two non-traditional center backs, 3 points should not be out of the question.

*This probable lineup was also lifted from Football-Italia.  I wouldn't be surprised to see Quagliarella instead of Esti.  I'm also hungover as F and unwilling to keep thinking anymore about this than I have to.  Damn holiday parties.