Share All sharing options for: Juventus 3-3 Napoli: Second Half Soldiers

Excuse me while I try to catch my breath and wrap my head around what we all saw take place.

That match was complete crap after 45 minutes. Juve were playing like crap. The formation Antonio Conte rolled out there — something like a 3-5-2 or 4-1-4-1 depending on who you ask —to begin things was crap as he looked to fill the void left by Claudio Marchisio's suspension. The ref was crap. You name it and it was probably crap.

But whatever it was — chair throwing in the locker room, screaming like a complete mad man, etc. — that Conte did at the break, it worked. Juventus came out a totally different team in the second half. They came back from two-goal deficits not once, but twice. Conte never let his men give up and they responded perfectly, getting a much-deserved draw at the San Paolo. 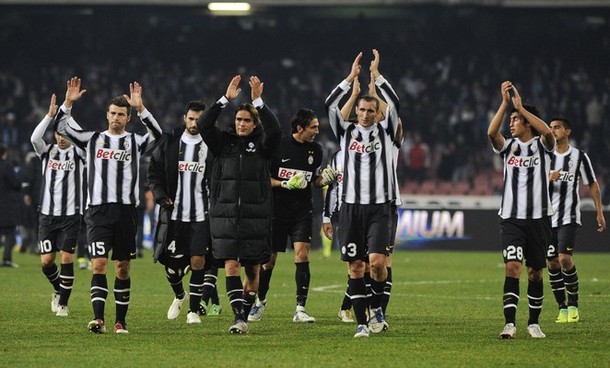 This is the perfect example of the new Juventus, Conte's Juventus. If this were a season or two ago, it would have been a 3-1 kind of loss without a doubt. But not Conte's Juve. This team had its starters on the field for the first 85 minutes of the match. Conte, for as much as it frustrated us at times, didn't make any changes. He stuck with the same 11 and it worked. Hell, the boys would be returning to Torino with three points instead of just one if one of those numerous chances were converted.

Buffon: 6 – Not going to fault him for any of the goals. If I did, I'd probably have my goalkeeping card revoked within a second. Sure, it'll say that he allowed three goals, but when you look at how the defense was playing at times, you could understand why. He did well when he was called upon. Another sign his getting back to being his normal self.

Lichtsteiner: 5.5 – His first sub-par game in a Juve shirt. Zuniga's pace definitely gave him trouble down the flank. To see Stephan gasping for air in the middle of the second half was surprising considering how he seems to be able to run for days.

Barzagli: 6 – Not his best game, but not his worst either. Looked to be the one guy in the back that wasn't completely rattled by the atmosphere at the San Paolo. Put in a good shift for the most part and tried his best to pick up the slack with his partner in center defense have a complete clunker.

Bonucci: 4.5 – Oof. Where to begin. Leo struggled with the pace of Napoli's attack all night. He never looked confident out there at all. Played a part in all of Napoli's goals. Just a game to forget for a guy who had been playing well since Conte put him in the starting lineup.

Chiellini: 5.5 – Giorgio definitely wasn't his usual beastly self. He wasn't as poor as Bonucci, but he wasn't all that impressive. Did a terrible job of preventing the cross on Napoli's third goal. Had a glorious chance to score a potential game-winner late in the second half but couldn't finish it.

Pirlo: 5.5 – Definitely a tale of two halves for Andrea. The first was highlighted by giving away a penalty — which was the right call — when he tackled Lavezzi just inside of the box. He improved in the second half, but didn't completely get back to the kind of game we've seen from him just about every time out since his move from Milan.

Vidal: 6.5 – A typical Arturo Vidal kind of game. He had an impact on the offensive end with a great assist on Matri's goal and did his usual dirty work on the defensive end. He definitely had to shoulder the load in the center of the park with Marchisio being suspended and Pirlo having an off night.

Estigarribia: 6.5 – The more I see him play, the more I like him. He was involved in the attack and did a quality job getting back in defense and supporting Chiellini. Showing signs that he deserves to be in the lineup a lot more often.

Pepe 7 - Pepe never really got into the match like he has been in the past couple of weeks. Conte playing him in more of a central role in the first half didn't help at all. That being said, he didn't do a whole hell of a lot in the second half before he scored the equalizer. His game-tying goal — aided by a lucky bounce — was one hell of a run and why he gets such a high rating. He's now scored in three consecutive games, something none of us probably thought we'd see. 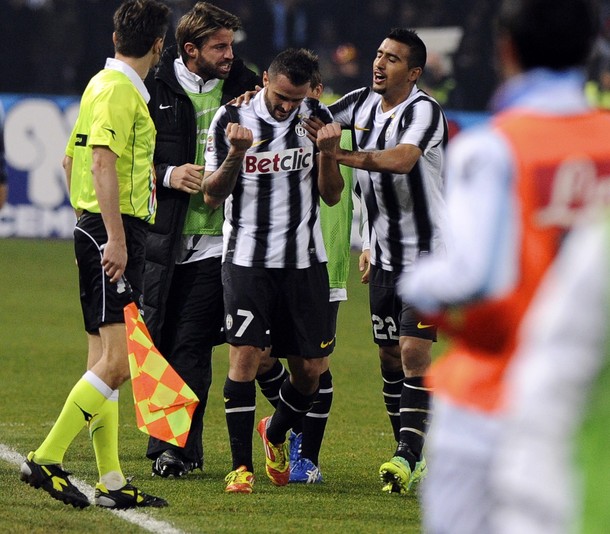 Matri: 7 – We talk about how well Marchisio is playing right now, but Matri's performances have been right up there. His team-leading sixth goal of the season was wonderfully taken, slotting it past an on-rushing De Sanctis just after halftime. He's the best Italian prima punta the country has at the moment (sorry, Pazzo) and only seems like he's getting better.

Vucinic: 6.5 - How the hell did that Mirko show up after the one we saw in the first half? It was like night and day. I was incredibly surprised that he went from that absent to that involved in the second half. He was vital in Juve's comeback and almost had a goal himself, forcing a quality save out of De Sanctis. Hopefully he can bring that kind of effort to the party more often than not going forward. 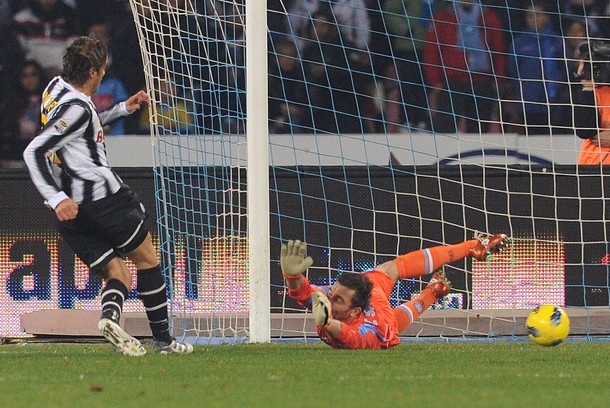 Conte: 6.5 – Got it wrong in the first half, got it right in the second half (as I'll get to below). The thing that impressed me most is how the squad responded immediately after the break. The first half was utter crap and they completely turned it around in the second 45 minutes. If Conte screamed until his face turned blue in the locker room, good for him. The team needed a kick in the backside and they definitely played like the Mister wanted them to afterwards. But hey, still unbeaten and now two points up. Can't complain about that.

#1: Conte totally got the tactics wrong in the first half — Going into the San Paolo with a totally new formation? Yeah, try again, Antonio. Whether it was playing centrally or not just doing a straight swap of Pazienza for Marchisio, Conte's choice of formation was the wrong one to go with. Pepe drifting into the middle was a complete head scratcher.

#2: Conte got things right after halftime — A completely different team. My god, to go from dreadful to awesome was incredible to watch from Juventus, and obviously Conte had a huge amount to do with it. The man continues to show the signs of a great manager. In Conte We Trust.

#3: MOAR QUAGS — I hate to sound like a broken record, but can we get Fabio more than five or so minutes of playing time, please?

#4: The refereeing made no sense...at all — It's easy to play armchair ref. Anybody can do it. With that being said, how craptastic was that display from Tagliavento and Co.? The penalty call was right, but it was just downhill from there.

#5: It'll be nice to have Claudio back this weekend. That is all.

- Krasic: The only thing we saw Meelosh doing against Napoli was running on the sidelines. Oh well. I've always been a fan and I really do hope Conte gives him a chance, but how much longer will be okay with sitting on the bench?
- Zebina: (lifetime award)
- Amauri: (almost lifetime award status) #IBlameAmauri