ROTD: On Oxymorons and Morons.

Share All sharing options for: ROTD: On Oxymorons and Morons.

Believe it or not, I like to rant. I know, I know, I'm normally so calm and tolerant. But under the right circumstances, I've been known to unleash a bit. This week is one of them. And as such, I present to you: the Rant(s) of the Day (ROTD).

As it's been quite a while since I've had occassion or motivation to post anything (no calcio, no previews; which actually is half the reason for my annoyance), I began the week thinking I'd get into a few random thoughts. Among the things which I hoped to get onto were the Azzurri's new jerseys.  Of course, Danny decided that Monday just had to be the day for one of his quadrennial posts and beat me to the punch.  Thanks.  Thanks for ruining my rant about how Puma has been disappointing me.  I'll save my more detailed opinions about how I like the lighter, traditional azure color, and the white collar with the tri-color thing, but Puma always has to go a step too far and f it up somehow.  Just like for Euro 2008, which were some of my favorite jerseys; simple, traditional, elegant, with the nice gold-trim v-neck, topped off with stupid bubble numbers.  This year, there is no need for all that 3D business all over the body of the shirt (the 90’s ended when it became 2000, thanks), and the collar, one of the best parts, is about a half an inch too high.  Sorry, Neru.  I mean, overall the jersey is okay, but could have been better with less.  Puma used to be synonymous with style.  Now their kits are proving oxymoronic.

Speaking of oxymorons, this week once again demonstrated that the words "Italian" and "Justice" should never be combined in the same sentence unless it's part of a witty satire (strokes ego).  CONI determined that they did not have the competency to rule on the 2006 stripped Scudetto, despite previous assertions to the contrary.  Perhaps their statement was written incorrectly and they meant they lack competency generally, but at any rate, this prompted Andrea Agnelli to request a roundtable to determine fairness.  I appreciate your efforts, Andrea, I truly do.  And I'm not being sarcastic for once when I write that.  But really, a roundtable?  This is the same system which "prosecuted" Calciopoli in what, 4 months, with a fraction of the available evidence considered, and then conveniently waited until just after the statute of limitations tolled before admitting other teams (coughIntercough) were actually more culpable.  I won't hold my breath on anything worthwhile coming of this.

Aside from the legal action already commenced before CONI, the club has commenced legal action before TAR , requesting a hell of a lot of money in damages.  What exactly TAR stands for, I don’t know.  I do know that it is some equivalent of civil courts in Italy which, of course, probably means absolutely nothing.  The good news is that both TNAS and TAR are separate and apart from the FIGC.  The bad news is, they’re both “justice” entities which exist in Italy.  This oughta get somewhere fast. 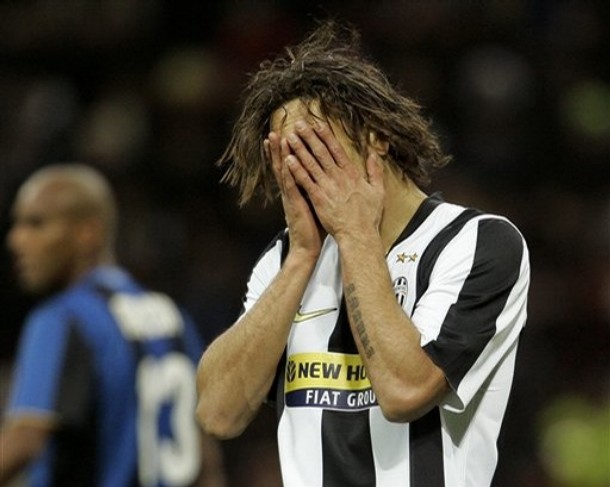 And finally, onto morons, Amauri today melodromatically explained that he was "desperate" for a Juve exit.  Really?  REALLY???  Are you effing serious, Amauri?  I don't even know where to begin.  I actually used to defend you.  You've been here for what's going on four years, and haven't done a single thing beyond the first six months.  Still, I used to say, give him a chance, he could regain his form, his torrid form when he first arrived both domestically and in the Champions League couldn't have been just a fluke.

Well, it may not have been a fluke, but Amauri, you've done nothing but show that you can't handle the weight of the black and white shirt.  You had the opportunity for a quick, easy, seemless exit just a few short months ago.  You didn't take it.  You've since been stripped of the beloved number 11 shirt for a leftback who lasted all of two weeks as a regular, and haven't been seen since.  The only positive I can remember about you is that after your first six months here, I didn't have to see your stupid samba dancing goal celebration anymore.  You know why?  Because you stopped effing scoring.

Have at it, folks.  I'll see you this weekend for the Palermo preview.