Another week passed, another four points from two games, another all too quite common string of results, and -- another Saturday fixture. Which means another Friday preview. Well, happy Friday everyone, a day which I've dubbed while working in a previous job some time ago as "Bang on Drum Fridays!" Let's get this weekend started right, and let's kick some merda boo-tay! 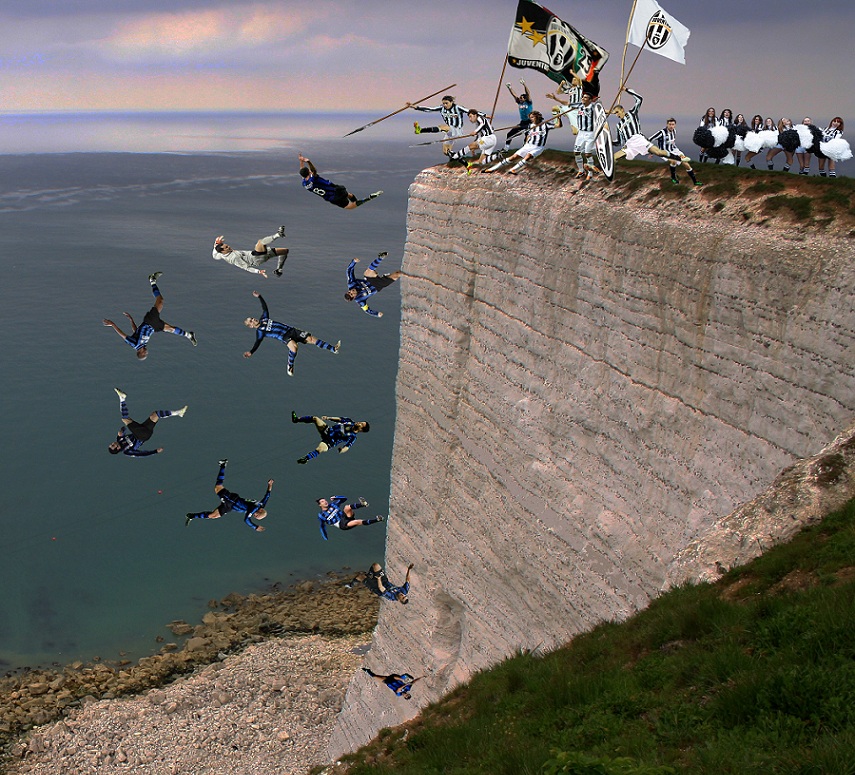 A heartbreaking draw against Genoa, followed up with a thrilling 2-1 win which should've been 4-1, combined with a little bit of help from a female friend leaves us  1 point clear at the top of the table with a full third of the season complete.  I know the past two years have seen a respectable beginning to the season start to unravel by Christmas time, followed by a complete plummet in the second half, but we're in the best position we've been in this late since merdapoli farsopoli calciopoli.  Oh, and despite dropping some points needlessly here and there, we're still undefeated.  Besides, in this crazy, competitive Serie A we're living in these days, show me one team that hasn't dropped points that it shouldn't have.  You can't.

And now, it's time to face off with our oldest, most-hated, scummy rivals.  This current Inter crop, from the top down, makes Berlusconi look more clean-cut than a young Jimmy Stewart.  Massimo Moratti?  If Ron Jeremy, Richard Nixon, and Gary Busey could've all gang-banged and somehow impregnated a living Amy Winehouse, that would be him.  Thiago Motta?  Go screw.  The man could fight a Quaker.

To say I hate them would be the understatement of the century.  And that's entirely because of the post-calciopoli fallout, and the new evidence which emerged over the past few months.  In years past I would typically root for Italian teams against foreign competition because, hey, they're Italian.  Except for Inter.  I would never root for them.  Well now, in the aftermath of the aforementioned calciopoli bullshit, I'm to the point where I'm ready to give a big FU to the rest of Serie A as a whole (except for Bari, where my dad is from, and who are in Serie B anyway, and probably will be forever).  I'm even close to giving the finger to the FIGC.  You can imagine where the esteem to which I hold Sfinter (I'm to the point where I'm even getting sick of saying their real name) is at right now.  Even Dante couldn't imagine levels as low.  Besides, they've never even really been Italian.  Apparently they want Montolivo now?  Don't hold your breath.  Yes, his name ends in a vowel but no, he's not Argentinian.

Le chiavi:  Press, press, and press.  We need to go into this game with the same strategy we had against Milan, and the same intensity we had for the first 45 minutes against Fiorentina.  Sfinter is looking old, slow, and every bit the team put together in the dangerously-financially-stretched-thin manner which they were a few years ago, still relying on a few leftovers past their peak to get by each week.  We need to exploit them with our biggest advantages:  possession, pace, speed, and tactics.  Control the ball, control the game, and don't give them a chance to know what hit them.  Take it to them and punch them.  Hard.  The goals will come.  Unless Vucinic is shooting.

I'd like to see a midfield consisting of Vidal and Marchisio in front of the silky smooth (by that I'm referring to both the hair and technique) Andrea Pirlo once again, much like versus Milan.  And for the love of Christ, can we please give Elia a chance to play?  The idea of him running down the pitch with the ball straight at Maicon is making me tingle.  The lad needs a chance to show what he can do.  45 minutes isn't a big-enough sample size.

And speaking of the left side, how about backing him up with PDC and shifting Chiellini back to CB where he belongs?  I've never been a huge fan of Giorgio at LB, but have reluctantly gone along with it in certain times of need.  Right now Inter is looking tired and slow.  Putting some serious pace on the left side in PDC and Elia could reconjure images last seen when DeCeglie made Zambrotta look like a child a couple of years ago against Milan.  With everything that PDC showed in the past, particularly last year pre-injury, give the guy a shot.  Even if he is not the longterm solution, there are better options than playing Chiellini there.  I've liked what I've seen from all facets of Estigarribia's  game thus far, and he's got a history of playing LB.  I still insist that Pepe would make a solid wingback, and even Arturo Vidal can deputize when in need, ala Merdanetti Zanetti.  Yes, a good solution may very well be in-house, and not at the expense of playing one of the best center backs on Earth out of position.  That is, unless we look elsewhere for our solution.

And can we please stop playing Vucinic, but if we need to play with a seconda punta please, pretty-effing-please, give Quagliarella a shot?  He at least worked hard against Fiorentina, but his misses made Amauri look like Cavani.  I still think he's a really, really good player, although not the player I dreamed about over the summer mercato.  Maybe he needs a a short mental break too.

Good news: Sfinter are without Cesar, Motta, Forlan, Poli, Rannochia, and Samuel.  We're for the most part at full strength, minus Buffon (important, but Storari as a backup makes the blow far less severe) and Giaccherini.  I'll take that.

Oh, and Sfinter are currently coached by Claudio Ranieri. 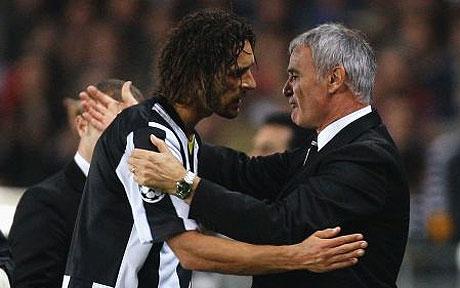 Bringing homoeroticism and underachieving to levels not seen since Wham!

The bad:  The only bad news I see is for Sfinter.  If former Merdarista Ronaldo is correct, um, self-service is dangerous for players, leaving Stankovic and Lucio without any hope at all of getting lucky this weekend.  :(

I know Quags won't start for the first time in a big tie such as this.  Neither will PDC.  I'm just being contrarian and difficult.

All of the media outlets are calling Sfinter's formation a 4-3-1-2, with Sneijder in his natural gayquartista trequartista position, but I refuse to believe that Ranieri is capable of deploying anything other than a 4-4-2.  Much like I will refuse to believe any substitution will occur before the 87th minute.  I've watched too many games with him as our own coach to be fooled again.  Don't piss on my leg and tell me it's raining, Gazzetto/Tuttosport/Corriere!!!