I know everyone is thinking about the Inter match, as you all should. Hell, I can't even bring myself to recap the Fiorentina match as my ADD is at level 1000 right now in anticipation of the Derby d'Italia. (For you non-American readers, ADD is this made up condition in the USA that helps people make excuses when they don't feel like concentrating.)

For the first time in a few weeks though, Juventus played a game very well worth remembering against Fiorentina. Did you see that first half defense? Seriously, that was Juventus? JESUS CHRIST! That was the most impressive half pressing-wise we have played since I can remember (which is actually not that long). 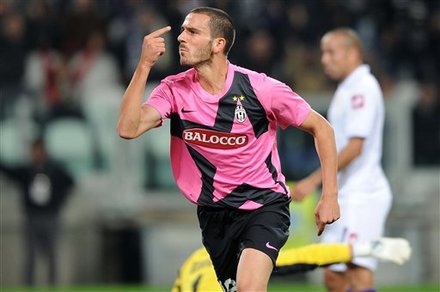 With both teams starting with 4-3-3 formations, the game broke off at a good pace with Juventus once again coming out the gates pushing and pressing for an early goal. None of us could've predicted, however, that that goal will come from a set piece, let alone a corner. Lack of scoring from corners has been a recurring team in the Juve Offside comment threads ever since the start of the season. It was nice to finally see one be used productively.

From the corner, Pirlo put in a low pass to Vidal who was coming in from outside the area for a shot, and when Boruc deflected that shot right in front of his own goal, Bonucci pounced on the rebound and opened the scoring. Maybe a goalkeeper's mistake, but I think that shot was a tough one to react to as it was close to the keeper. Either way, Juve Fiorentina, 1:0.

The rest of that half was, as they say, history. Juventus enjoyed utter domination in every aspect, attacking patiently but powerfully, and winning any lost ball right away in crazy fast fashion. Remember Barcelona's 6 second rule? Yeah, Conte's man took that to the next level and made it a 2 second rule. Fiorentina could not get a breather, let alone string a few passes together. I must admit it was a big surprise to see the first half unravel like that, and I felt extremely proud to be a Juventino.

Unfortunately, if there was one thing we lacked in that first half, it was scoring a second goal. We had the possession, momentum, domination, and chances. For what seemed like the umpteenth time this season, we could not close out the game when we had a chance.

At the beginning of the second half, Sinisha Mihaljovic introduced Gilardino to the game which gave Fiorentina a bit more firepower up front. More importantly, Gilardino's role as the main striker allowed Jovetic to roam more freely and cause a bit more trouble for our team. While it was obvious that Juventus wasn't going to be able to keep up with the pressing tempo of the first half, I was a bit disappointed with how poorly we started the second 45 minutes. Or was it just Fiorentina finally playing football?

In any case, the second half was a thrilling one. Jovetic scored a beautiful goal to bring the Viola back in the game at the beginning of the second half. Storari had no chance of saving the shot, and the young Montenegrin continued his scoring form of late.

Juventus were not to be denied victory though. Our best striker for the past 12 months, Alessandro Matri, took a lovely pass by Pepe midway through the second half to put Juve up 2:1 for good. 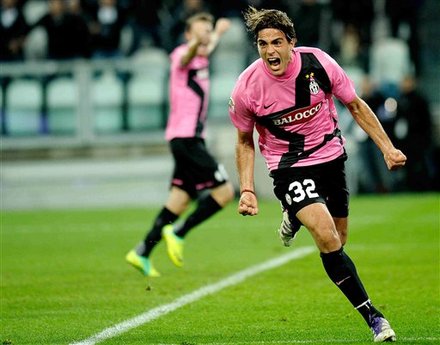 Storari: 6.5 - Coming in for the injured Buffon, Storari is a keeper you can still very much count on. Despite conceding a goal, his performance was quite encouraging. He made a terrific save early in the second half and kept his composure when having to clear some tricky backpasses. With the latest news saying he will be our starting keeper against Inter, I have full faith in Marco to help us on to victory.

Lichtsteiner: 7 - Steiner may have had a couple quiet games against Chievo and Catania, but he stepped up big time against Fiorentina. His good old self on defense, he was actually more impressive on offense with his crosses and constant pushing up to make up for the lack of a true right winger.

Barzagli: 7 - Anyone else notice how Barzagli was putting pressure on the attacker in front of him 9/10 times a ball came in to a Viola player? Absolute tremendous tenacity from the defender that I vow to not let go unrecognized.

Bonucci: 7.5 - Did the same amount of work as Barzagli AND scored our first goal. He was also wide open for a tap in in the first half when Vucinic opted to shoot wide instead of pass to the middle.

Chiellini: 6.5 - We have nothing, absolutely nothing to directly blame Chiellini for. That by itself means a huge improvement from the last few games.

Pirlo: 6.5 - Took more of a backseat today, and to everyone's surprise we still got the victory. Not that he is not a pleasure to watch, time and again. Having Vidal and Marchisio on the pitch really helps Pirlo settle down more. Take note Mister!

Marchisio: 6.5 - Another silent but pesty performance by Marchisio. I really hope Conte brings back the interchangeable attacking midfield duo of Vidal+Marchisio for the Inter match the same way he did for the Milan match. The poor Inter defense won't know what hit em!

Vidal 7 - PIT. BULL. TERRIER! This guy just goes all out. I love it. His tackles are very good, and he covered space beautifully, especially in the first half. Offensively, he will struggle a bit to get his groove going given all the defensive duties Conte assigns, but that was to be expected.

Pepe: 7.5 - Speaking of going all out, Pepe put in a pretty impressive performance Tuesday until he got injured/tired late in the second half. He did great to set up Matri for the second goal, which by itself warrants a high grade. Bravo Pepinho, keep it up!

Vucinic: 6 -Yes, he was largely wasteful. Yes, he has been like that in every game he's played this year. Yes, he sometimes gets lazy. All that said, I thought people were a bit harsh on Vucinic for his performance against Fiorentina. The man was motivated, determined, hungry. What adjective of those three do you not want for a Montenegrin? I wish he was a bit less selfish on a couple occasions, but you can't blame the guy for really trying to score. In pure FM talk, he was simply snatching at his chances. Though he's working really hard on improving that aspect of the game.

Matri: 7.5 - Man of match! Such a beautiful player, both physically and on the pitch. He's been our saviour up top since last winter, and barring any injuries, I don't see him stopping anytime soon. Bring on MERDA!

Conte: 7 - He definitely decided to mix things up a bit on Tuesday. A natural 4-3-3 formation with Vucinic on the left for the first time this season (from the start) actually seemed to work really well. But that wasn't what impressed me. The 5-4-1 at the end was. De Ceglie on the left, Steiner on the right, and Chiellini-Barzagli-Bonucci in the middle. If we ever need to park the bus for the last 5-10 minutes and protect our lead, I would definitely go with this tactic. That is, until our boys learn how to put a game away offensively. Where are ADP and Quagliarella when you need them?!

- Krasic: Was left out completely from the squad against Fiorentina, though personal problems are now an issue as well after his tragic family loss. Hope to see you back on the pitch soon Милош, this shitlist would love to get rid of you!
- Zebina: (lifetime award)
- Amauri: (nearing lifetime award status) #IBlameAmauri