CAMPIONIIIII D'ITALIAAAAAA!!! Can you believe it? We just won the Scudetto AGAIN, our 29th, and our 2nd in a row. It's been one hell of a season, and personally, I cannot wait for the upcoming World Cup in Germany. There were some real fond memories this year, how about that Appiah goal against Cagliari during the "Scudetto party" game? Insanity. Kid is a great player and those knees look rock solid, I bet he's going to become a champion. 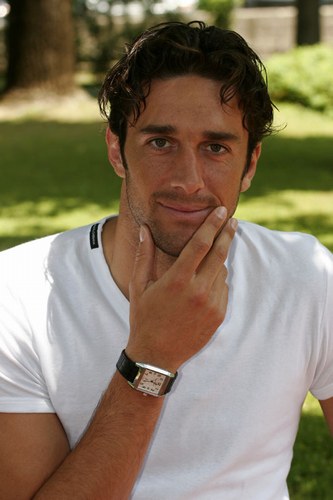 "Hmmm, does a big club in Italy actually want me?"

Gotta say though, we may have the best damn attack in Italy with Ibrahimovic and Trezeguet as prima puntas, and Del Piero and Mutu at seconda punta, but, well, Ibrahimovic hasn't done that well in the Champions League, and that's our real target for this upcoming year. After all, it is ours to win. We seem to be on a 11 year streak with the Big 'Ole Ears, winning it in '85, then '96, surely 2007 is our year! Thankfully, we've made a brilliant move on the mercato and picked up Italy's best striker, Luca Toni, coming off an absurd 31 goals this year as capocannoniere. Best of all, it's a free transfer! Incredible.

It's not 2006. We were relegated, Milan won that Champions League instead, and years of mediocrity have passed. Luca Toni is more washed up than Marco Materazzi. (Okay, maybe not that bad) Honestly, between our worst result at home in the campionato in 44 years, and Quagliarella's knee going CRACK (with Napoli upcoming) it was a pretty terrible way to open 2011. As much as in some ways I think signing Luca Toni makes sense, it isn't exactly the kind of transfer that "makes us dream." Hell, I'd take Hernan Crespo or Marco Di Vaio over Luca Toni at this point. 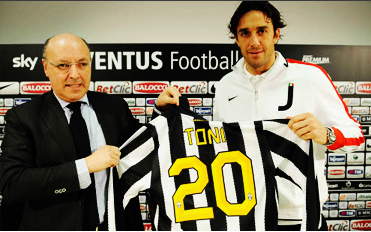 Juventus' new signing Luca Toni has expressed his excitement at joining the club and hopes to keep the Old Lady in contention for the Scudetto. The veteran striker arrives on a free transfer from Genoa and has signed a contract until June 2012. Speaking at his official unveiling Toni said: “I am delighted. It's a dream come true. I really wanted to join the club. I actually turned down [more] money to accept their offer. I have come here to show my worth, which is something I am convinced about, as well as to try and score goals, which I have always done. I was excited when this offer was made to me. I know the group and I know of their desire to win.

Last year with Roma we were a step away from realising a dream. I would like to bring a little bit of that luck with me and I believe [we can fight for the Scudetto] right until the end. I am ready to play against Napoli. It's up to the Coach to decide. It would be great to play alongside Alessandro Del Piero. He is a great champ. This group of players has a great hunger to get important results and therefore I am convinced that we will fight to win all the remaining games and hopefully get back to being the Juventus of old. You can't say no to Juve. I am a box-playing centre-forward and I believe that I will fit in well with Del Neri. I have chosen the No 20 shirt,” he concluded.

A few weeks ago, I said we should swoop in and get an aging striker that can bang in a few goals, although I didn't mention Luca Toni, because his goal-scoring abilities have been fairly erm, non-existent recently. The other thing I said was I wanted the striker on loan, so we wouldn't have to deal with dumping him in the future, so Luca Toni on a permanent 18-month contract wasn't exactly my ideal situation.

However, I can see a few positives in this move, and they all trace to Luca Toni being Amauri's replacement, and not Quagliarella's replacement. The whole point of my prior rant was simply, Amauri does not exist to me anymore, and thus, I imagined that Iaquinta was our only prima punta option, and so we needed someone to play as his reserve. Luca Toni coming in possibly fills one of my quotas, and that is never seeing Amauri step foot on the pitch again. The other thing to note is Luca Toni has 18-month contract. That's exactly how long is left on Amauri's contract, and I'm dreaming that Beppe Marotta offloads Amauri either this January, or possibly next summer.

Is it a brilliant move? Hell no, when I saw it, I was angry more than anything. But if it means Amauri is gone, both from the pitch and eventually, our club, it's a step forward. If this is Marotta's idea of replacing Fabio Quagliarella, well, then it's just all sorts of failure. We're now low on the seconda punta position, with only Del Piero to play there and possibly Martinez, assuming Jorge actually still exists. Delneri's 4-4-2 can easily work with 2 prima puntas, but the idea of seeing Luca Toni and Amauri up top is one of Dante's stages of hell. (Possible creative players we could have played up top- Diego? Oops. Cassano? Oops. Lanzafame? Oops.)

The one thing about this transfer that makes me thrilled, is it gives me an excuse to play (and post) one of my favorite YouTube clips. You are forewarned- everytime Luca scores, it will be on this page. May that be many, many times.

(And when Luca Toni fails? There's a YouTube for that)