Dzeko and the January Mercato

Share All sharing options for: Dzeko and the January Mercato 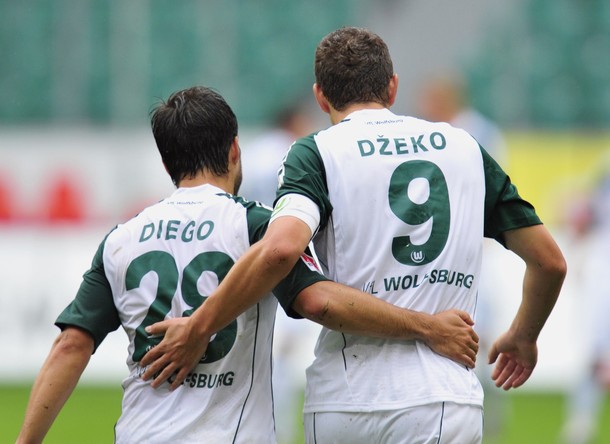 [From Yahoo Sports]- The biggest deal of soccer’s January transfer window hinges on a battle of wills between a billionaire Arabian royal and a remarkable Bosnian family that survived the siege of Sarajevo during the Balkan War. With Manchester City in firm contention for the English Premier League title, owner Sheikh Mansour bin Zayed al Nayhan is desperate to sign his No. 1 target, Bosnia-Herzegovina forward Edin Dzeko, who plays for the German Bundesliga team Wolfsburg.

Dzeko is the hottest available commodity in European soccer right now, and his size, skill and physicality have led many to suggest he could be the crucial factor that gets City over the line this season. A transfer fee of $40 million is close to being rubber-stamped by Wolfsburg, but there is still the issue of Dzeko’s wages to be resolved. And that, surprisingly, is where there is something of an impasse.

In theory, the wages should be the easiest thing to hash out. Sheikh Mansour’s endless wealth means City is the best-backed club in the world; it has already handed out huge salaries to most of its first-team squad. Midfielder Yaya Toure is paid more than $300,000 per week, while Dzeko makes around $70,000 per week in Germany. Even that amount would once have been beyond the wildest dreams of the 24-year-old and his family, which crammed 15 relatives into a two-room apartment during Dzeko’s childhood.

However, sources close to the deal have confirmed to Yahoo! Sports that Dzeko and his family (who still act as his advisers) are holding out for $270,000 per week, knowing full well that his stock is at an all-time high and that City has the funds to satisfy whatever he demands. City came in with an initial offer of around $185,000 per week, which Sheikh Mansour upped to more than $210,000 over the weekend. City has to be a little careful, though, as it does not wish to alienate its existing players by paying Dzeko an inflated figure.

This is a move that is virtually certain to be completed. Dzeko is ready to move, ready for the huge payday and also the chance to test himself in the English league, where he is confident he can thrive. City wants him badly, and know that snapping him up early in January could add great momentum to its hopes of unseating league leader Manchester United and claiming its first league title in 43 years. But the Dzekos know they can play hardball, and it wouldn’t be a huge surprise if the saga is dragged out for a couple of weeks in order to push up his wages.

Although by the day it's looking more and more likely that Dzeko will sign with Manchester City, I still have hope. For one, despite newspapers reporting he is in Manchester and prepared to sign, photographic evidence from today says otherwise. I feel we still have a chance, after all, Milos Krasic turned Manchester City down to join Juventus, and like Milos, it may relay on Dzeko's desire rather than euros and pounds.

The feeling I get (and this is substantiated in some facts, but more a Colbert-ish gut feeling) is that Dzeko wants to play for a big club, and in a big league. Not a rich team, not necessarily one challenging for the title, but one with history. After all, Wolfsburg have relatively wealthy patrons and recently won a league title, yet that didn't seem to satisfy him. Two summers ago, just having won the league title, he did everything he could to facilitate a move to Milan. Ultimately, no one is shocked it didn't happen as they are irrationally stingy.

Dzeko has made plenty of comments that indicate he wants to move to Italy- we know he's spoken with Diego and Brazzo about life at Juventus and Torino, even to the point that Brazzo said he received daily texts from Dzeko this summer. He voiced his disappointment over the non-move this summer, when surely Manchester City could have afforded him. All fall, Dzeko and his agent repeated that a January move was unlikely but a summer one likely, a clear hint at Juve's non-EU conundrum. (Fuck you, FIGC) And weeks ago, he stated he'd like to play in "the league that featured Shevchenko and Ronaldo." 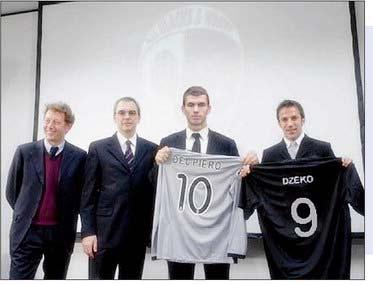 Will he move to Juventus this summer? I still think it's a possibility, and if he remains with Wolfsburg in February, very likely. The way I see it, Dzeko's massive wage demands are one way of trying to test City's resolve, or even scuppering the move. City may have money, but they don't have the same allure we do, and I think the league we play in has a part, too. After all, Dzeko was a Milanista as a child (not a problem for me, as long as he doesn't say "I have always loved Juve") and I believe one reason he hasn't been sent to Bayern Munich is that he'd like to leave Germany altogether.

Here's the key- I believe Dzeko wants a firm guarantee that if he stays until summer, Juventus will make a real bid. We have the money to do so, particularly if we offload Sissoko, it's just a question of whether Marotta will go for it or not. He's waited the last two summers for an Italian club to swoop in, and I doubt he will want to be strung on all summer like Milos Krasic, although less likely as he'd be the #1 target. Italian newspapers have stated that Dzeko sent an SMS to someone at Juve's management (take it with a grain of salt) saying something along the lines of "If you want me, prove it."

At the same time, Beppe Marotta has to have a Plan B. Should Dzeko leave for Manchester City, you can bet that Pazzini will be the all-out target this January, and especially this summer. The next few weeks will surely be filled with stories going back-and-forth. I sincerely believe that Dzeko would like to come to Juve, Wolfsburg willing, but his decision this January will be based on whether he thinks we will move for him or not. Wolfsburg is tanking and he seems anxious to leave, and if Manchester City can offer him boatloads of cash, a high-profile league, and the possibility of winning a league title, I couldn't begrudge him a move, particularly if he feels Juve aren't serious.

And you know what? Beppe Marotta's #1 priority this January should be giving Hasan Salihamidzic another year on his contract. That'd be a rather large signal.

(I say that facetiously of course, because Brazzo might go to Germany this January and an extension is never going to happen, but there's reasons to do it. Cheerful guy, does a job, and he's been translating for Milos Krasic and possibly recruiting Edin Dzeko)