An Experiment in Sensationalism- A Critique (Defense?) of Sport Newspapers

Share All sharing options for: An Experiment in Sensationalism- A Critique (Defense?) of Sport Newspapers

There's a wealth of football news out there. Daily sports-only newspapers have existed for more than a century, and they sell very well. The Gazzetta dello sport, Tuttosport, and the Corriere dello Sport are among the most read newspapers in Italy, in Spain, Marca actually has the highest readership of any newspaper type on a daily basis. With the advent of 24/7 news with CNN, sport cable channels have followed suit. There is a saturation of media. (ironic considering you're reading this on a blog) 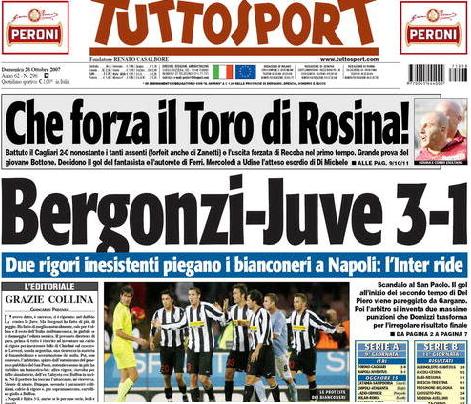 And maybe there's too many media groups out there. After all, football is played once or twice a week, which gives you several days to do match reports/previews, but ultimately, there's a couple gaps here and there, and it's easiest and most effective to fill it with nonsense. Nobody wants to read the front page of Tuttosport and see that the most meaningful thing for Tuesday, January 24th, is that Armand Traore has injured himself again, and will likely be out for 3-4 weeks. What people want to read, for better or worse, is that this means Traore is almost certainly returning to Arsenal this summer (true) and oh boy, we get to drum up stories about the possible replacements.

I'm guilty as well- I do indulge in speculation, though I think I tend to keep it relatively reasonable, unlike the absurd stories that Tuttosport and others proclaim we're signing Gareth Bale in January or that Real Madrid are interested in Amauri. And no matter how ridiculous Tuttosport is (I read it for the interviews!) I always end up back on their website, or checking my RSS feed. Probably because I'm addicted to calcio, and even if I shake my head at the most recent headline...I'm still checking it. If I had a dime for every time the sports media named a "transfer" official, I wouldn't be working at my current job, I'll tell you that. That's where the "OFFICIALLY OFFICIAL" tag I use for transfers originally came from, part jab, part facepalm at the many times we've signed Drogba, Ronaldo, or my favorite, the 100mil bid for Lionel Messi from a year ago or so. 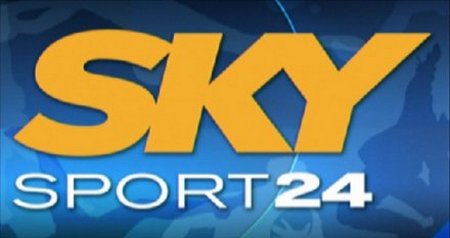 There's two things that made me think of this idea recently, the first thing was Goal.com naming Alex Del Piero in their "Serie A Worst XI of the Week" for his performance against Sampdoria. Absolutely absurd, clearly a dishonor solely based on viewing the highlights of Sampdoria-Juventus and seeing his horrible miss towards the end. I sincerely hope the man who wrote that up is not the same one who did a match report/player ratings for the actual game- articles, you'd think, that would really require, you know, watching the match in the first place. Why did he get named? First, ignorance, like I said, the person can't possible have watched the match. And second, of course, because people will pass it around if Ale is named as opposed to say Erjon Bodgani. (who played pretty well this weekend, but you get the point)

The other reason I bring this up is last week's article on Francesco Totti joining Juventus. It was born out of joking with a few Romanistas on Twitter about how ludicrous the Vucinic rumors were, often the sports media puts 2+2 together and labels it a deal. In theory, all the pieces for Francesco Totti (angry with Roma and the type of player Marotta was looking for) fit perfectly, but of course it was a ludicrous idea, and I chose Totti as a transfer that would obviously never happen. It was also due to a bit of frustration about the sports media in general, I honestly cannot wait for February 1st so they have to shut up until at least March to start the rumor mill again. It was a fun post to do (huge thanks to oobia and his wife for the Photoshop job, I wanted to keep the credit off initially to see if people would believe it), and after it was posted, I started wondering if that kind of story would boost our pageviews. 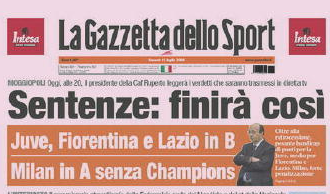 Sure enough, I got a weekly report on the reads we had last week, and the Totti story got more than double the pageviews our next post got (which was a typical number for one of our better posts of the week) and probably triple the pageviews of the "average" article. I was a bit surprised to see it was that big, and while I'm sure people passed it around because they thought it was something funny and/or clever (thanks if so) I'm sure there was an equal amount, if not greater, that read it because they thought it might actually be true. Sensationalism pays, for better or worse.

And while I hate the Tuttosports, the Goal.coms, and especially the Tribal Footballs (worst. site. ever.) of the world, ultimately, I can't blame them. If this is their livelihood, if this is their business, they're going to do what gets the reads, and that's true. In a one-match week, by Wednesday or so, no one cares about the last match unless it was spectacular one way or another, and it's a bit too soon to do preview work of the next game. So they have to fill that, and optimally, they might conduct interviews with fascinating people, but even that probably won't fuel the subscriber numbers enough.

That's the way it is, and is there anyway to fix it? Probably not. You'll just have to sift the nonsense from everything rest, or on some sites...the little bit of good stuff from the overwhelming garbage.