Poll of the Day: Will We Make the Champion's League Without Investing in January?

Share All sharing options for: Poll of the Day: Will We Make the Champion's League Without Investing in January?

Quite simple, really. Do you think this squad as is will make at least 4th place come May? I'll give my opinion after the poll, as I'd like you to vote your opinion before seeing mine.

Will we make the Champion's League With the Current Roster?online survey

It won't surprise most of you who read this blog regularly, but my vote is Yes! The difference between last year's squad and the Champion's League is the attitude- grinta, spirit, and grit. That wouldn't have won us the Scudetto, but considering we were in the Champion's League reach until late March, it could have gotten us into at least 4th. That was the big signing of the summer, and Delneri has done a good job of re-instilling it in the team.

We've had some troubles lately, but Delneri's teams often do in January and he's experienced enough to correct the mistakes. Today, after a mini-match in which Martinez and Amauri scored (well, at least he can in practice) the team focused on tactical work and has been working on defending crosses all week, something that badly troubled us against Parma and Napoli. And we've seen improvements- both Bari and Catania, while not the most rigorous of opponents, rarely threatened our net. Catania never troubled Gigi until he had to make one save towards the end, and Bari had a less than impressive 5 total shots in the entire game.

While the race for the Scudetto is much easier than last season, I feel the race for 4th place will be more intense. Napoli and Palermo threatened Sampdoria for last season's 4th place, and I believe they have only improved since then. Milan, Roma, and Inter who were are still in the Champion's League will be angling for a post as well, and Lazio isn't to be discounted. It might be a weak amount of points to win the league title, but 4th will be harder. But we're up for it. 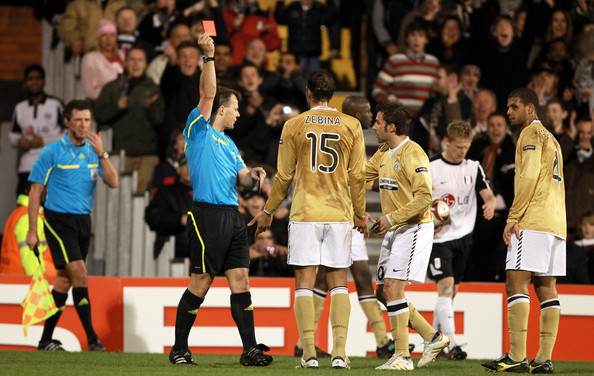 Last year, we got to the point of playing Chimenti, Salihamidzic, Grygera, Zebina, and Grosso in defense, when Cannavaro got sent off. Our reserves aren't great, but they are far better than that. Give me Manninger, Motta, Legro, Rinaudo, and Traore over that anyday.

It's cliche and stupid to say, but the 2nd half of the season relies much of the depth of a team. That's why Lazio, despite high flying starts in several recent campaigns, haven't really challenged for the Scudetto, likewise Napoli faded from Champion's League hopes last year, when you consider the reserves to Sampdoria's XI of last season, it is a truly impressive achievement. Simply put, Juve's very large squad will be fundamental to beating Napoli, Palermo, or Lazio to that spot, who have a certain amount of energy, but not the same bench as us. It allows us to survive the injuries, and the victory at the San Siro over Milan is case of why I believe we will finish in the top 4- We had many injuries, but the "emergency" was Pepe playing out of position as fullback, hardly a disastrous one. We had 2 central midfielders playing as wingers, and they were instrumental in defending our lead and in Sissoko's laughable case, providing the lead. Players playing out of position, covering one another, playing like a team, and never giving up- that's what'll carry us to 4th.

If the injuries subside a bit, I'm more confident. And if Delneri's system continues to improve, hopefully to the point of a much tighter defense with clean sheets, very likely. De Ceglie and Buffon's return should help, but the tactical work and training on crosses shows the team is working on it as a unit. I do not think spending now is necessary to get 4th, it is to aim for the Scudetto, but it depends on who's out there. Frankly, like Moggi said, I'd rather save our money and make bigger moves this summer when we have a defined aim, and defined amount of cash. My priorities for this summer? A very good RB, and a very good striker.