Everyone could see the problems coming. Two strongheaded Romans, both stuck in their ways, the problems between Totti and Ranieri have manifested themselves several times this season. First, there was Totti's outburst against Claudio's "catenaccio" he practiced against Bayern Munich, and more recently, his decision to give Totti only 4-minutes of stoppage time against Sampdoria. Totti was furious, and refused to pledge his long-term allegiance to his hometown club. 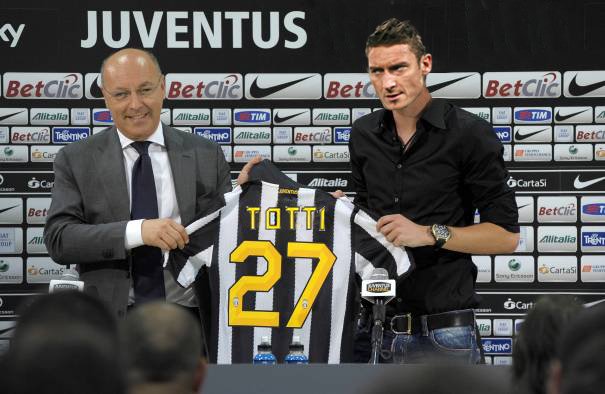 "In January we must seize the opportunity, and there will be one. Because there are important players who are not able to establish themselves in their teams who will be seeking better opportunities elsewhere. I will not make names, but there are some big opportunities we must grab," declared Juventus DS Giuseppe Marotta. Totti indicated his unhappiness at the club, “I accept everything, as I am at the disposal of the club and the coach. I am sad only when I step into the Trigoria training ground. Outside, I'm perfectly fine.” The rapport has been broken, and Marotta swooped in to sign Francesco on a free transfer signing a 30 month contract tying him to the club until 2013.

It's no secret Juventus have been after a striker recently, with Luca Toni and Vincenzo Iaquinta out injured, Amauri generally worthless, and unfortunately, Fabio Quagliarella's season is over. Marotta has desperately been seeking an old, experienced striker that can provide some kind of creativity, and Totti clearly fits the bill just as Toni is an old, experienced striker than can play target man.

From Roma to Juventus. Everything happened in a few hours. Francesco Totti is Juventus’ new forward and he is already at mister Del Neri’s disposal, ready to give his contribution starting from next away match vs. Sampdoria. Waiting to go down to the pitch, the scorer from Roma said his first words as a bianconero. «I’m so happy, being here is a dream come true. Juve is Juve anyway, and I did not hesitate, not even a minute, to accept their offer, even if I had to take a paycut from what I earned at Roma.» Totti is ready to face this new reality. And he is already aware of what wearing Juventus jersey means: «I’m coming here with so much enthusiasm and I’m ready for trainer’s decisions. I feel physically fine and also yesterday I played 90 minutes. In this team I know many boys and I know how deep is their victories’ hunger, otherwise they won’t be here. I so willing to win too, and keep on scoring, as I always did in my career».

An agreement for two years and a half, Totti gets to Juve after experiences in Roma. But most of all from that in giallorosso, the forward wants to take inspiration. «Last year, we started late but almost reached the Scudetto. I’d like to live this experience again so much, for this reason I hope I’ll be able to give that little luck more. Del Neri's playing style is right for my forward characteristics, I know him from our past, that’s why I know I can do good. I'm excited to begin, as I am already good friends with many people here; Alessandro, Gianluigi, Alberto, and another Roman, Simone Pepe.»

Totti will meet up with his old friend Buffon

As well as Alex Del Piero