Share All sharing options for: The Mezzogiorno Mentality: Juventus-Bari

I really hate the "Mezzogiorno Mentality" as I've started to call it. It's the phenomenon of clubs from southern Italy acting like Torino, another words, they have two goals every season- to reach la salvezza, and to beat Juventus. For those of you who don't know, southern Italy is covered by Juventini. In each city, Juventus is the #2 team, in some, one could almost say the #1 squad. Palermo, Napoli, Bari, Lecce, Catania, etc, all are hotbeds of Juventus support. (Bit of an exaggeration in some circumstances, but you get the point) I don't know if it's an inferiority complex the teams have, or a personal vendetta for their home fans, but it's annoying as hell.

It was plenty on show last year, where we lost to nearly every southern team until defeating Bari 3-0 at home. And it's been evident this season, too, it's a phenomena that runs years back. Bari of course upset us 1-0 on the first matchday of the season, they've gone on to win two other games, and one was a local derby. Take Palermo for example, we were just starting to get our team together, Palermo were in crisis and they traveled to Torino. What happened? They tore us apart. Next week? They draw 2-2 at home to Lecce, and were lucky to do so, starting 2-0 down. Is anyone shocked at all to see Napoli's result today? No. So essentially, our 3-0 mauling is book-ended by a 0-0 draw, at home, against a very mediocre Fiorentina side, and a 3-1 ass kicking at the hands of Inter. Fantastic.

You can see where I'm going with this- we host Bari at home, and although they are god awful without any semblance of quality in the squad, I'm not writing this as 3 points on the board. We should crush Bari, they are not a very good team. Football Italia has a lot of statistics that indicate this should be a walk in the park:

Bari’s winless streak at Juventus will continue. [They have never won in Torino] In 29 games, they have collected just five draws in Turin, conceding 82 goals and scoring only 13 in the process. Juventus have scored in 28 of their 29 home League games against Bari in Serie A. Their only blank came in a 0-0 back in November 1935. Bari have not netted here since January 1991 when a Daniel Andersen penalty ensured a 1-1 draw. Juve have scored 18 goals in the last 10 home ties against the minnows. 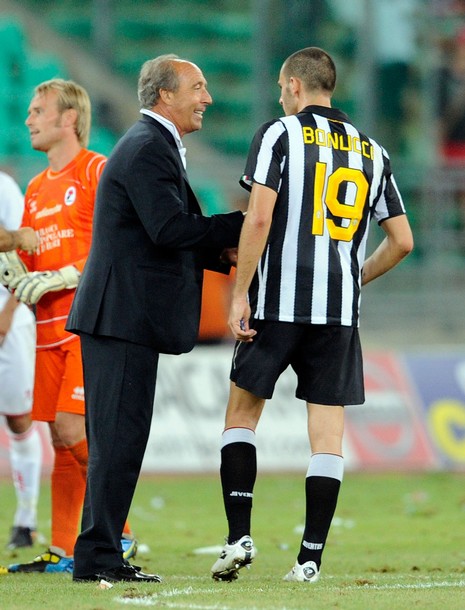 Last week, Bari lost 2-0 at home to Bologna who scored via two ex-Juventini, Albin Ekdal and Marco di Vaio. They are not a good team, it's a shame that in one summer the incompetent and indifferent owners managed to destroy what was a very impressive team. There is no reason statistically that Bari should give us any problems tomorrow- they are missing their key front man, Barreto, and will likely lead with Okaka and Kutuzov, not exactly the most prolific of strikers. Their defense consists of Raggi and Glik, two very average ex-Palermo defenders, and average is being generous. Gazzi and Donati are not even close to the partnership of Aquilani and Melo. But while it is a horribly boring cliche, we all know calcio is not played on paper or via statistics. If there was ever a game that would see Bari putting in a shockingly good performance, this is it.

We've got our own problems as well, namely, we're coming off conceding 7 in two games, although a mid-week clean sheet against Catania should help our confidence. The main issue is in attack- Luca Toni is out for a month, Quagliarella for the rest of the season, and the others are banged up too. Given the striker injury crisis, Iaquinta volunteered to play tomorrow, but Delneri wisely has chosen to let him fully recover instead of risking it. Del Piero is heavily banged up from the Catania game, and while he's been called up, it's uncertain whether he will be playing, scans indicated no damage aside from heavy bruising.

The interesting note is about Amauri- he's been practicing this week with a face mask, and in his press conference Delneri said "He's fully recovered, we will count on the fact that the mask will protect him." And yet, he's not even called up, not even going to be on the bench. Given that his agents were at Juve's HQ on Friday, it gives me some hope that he may, in fact, be getting dumped this January, but I refuse to get excited. Jorge Martinez will likely be playing as a striker, something I'm looking forward to, but I'm not expecting much, he's coming off 3 months of injury.

Del Neri: «We are competitive against anyone»
All media were focused on Buffon’s return and on the transfer market, omitting questions about Bari. These are the two main subject matters which characterize Del Neri’s press conference before the match against the team from Puglia. The coach is immediately asked after the goalkeeper chosen for the Sunday match: «It will be Buffon’s turn. He is physically ok and so ready to play. Considering his behaviour on last Thursday, I’m sure he will do his duty. During the last month, he has completely and quickly recovered, if not he wouldn’t play even against Catania, on the contrary he is very reliable. Storari? When a player doesn’t play, he can’t be happy of course. However, we have a good relationship, he knows I hold him in great respect and that the choice I made was quite difficult. Moreover, Buffon is a worldwide known player and he ensures a great experience. Juventus needs two excellent goalkeepers, without forgetting Manninger who is another valuable element. This role is well covered and having each sector full is quite fundamental».

The questions move to the forward sector where, after Quagliarella’s accident, Toni is also stopped: «We think to recover Del Piero, as yesterday he was fine. Martinez will be available, whereas Iaquinta still has a long-time recover. He would sacrifice, but we should be careful to not lose players for a too long time because they could be crucial in future. Amauri? He recovered from the nasal septum fracture and we expected the mask to protect him».

As far as the forward sector, all journalists mention various names: «The society has a very good behaviour and is very careful in evaluating possible opportunities, but the problem is that during this period we’re particularly unlucky, the accident occurred to Toni is a mere example. We’re trying to recover all our players because this group, when complete, showed to be very competitive against anyone and to have all qualities to nock more than the first round. Following newspaper suggestions, we should have dozens of strikers…».

However, Juventus had more difficulties in the defense sector instead of in the forward one: «We conceded many goals in a few matches, it’s true, but we also played matches conceding very few goals, and always with the same players. We must go back to be the team which succeeded in armouring the defense».