I officially hate Palermo. I really do. It's not the players on the team, many who I admire the hell out of, or the fans, who I really have no beef with. It's not the coach, who is doing fantastic work or Sabatini, their transfer guru. Juve slander aside, it's not Zamparini, who without, calcio would not be the same. It's the mentality, or something. No matter how shit their form is, no matter how many goals they concede against Brescia or some Eastern European team I've never heard of it, they show up to play us. And then promptly regress. I would throw money on a Lecce win/draw this weekend, even if Palermo are at home, simply because that'd be their M.O. I remember a year ago or something, they beat us 2-0 in Torino, and then went down 3-0 in Milan against Inter. (before staging a comeback..but still losing 5-3) I wish the best to Palermo who have a great young squad, scouts, and play some impressive football, just stop bringing your A game against us when you're in relegation spots in the table. Anotherwords, stop f***ing beating us. 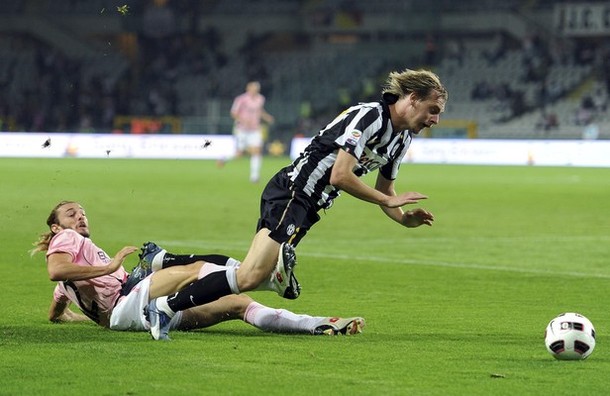 Palermo looked like they did last year, attacking, fast, cohesive, and we looked like our first few weeks of Serie A. Decent, but lacking concentration at key moments. If I was at Vinovo, I would be throwing books at every player in defense or central midfield, for standing still when the ball is in the box. Don't f***ing do it! I don't care what you do, short of rugby tackling a player or Paul Scholes-style handballing it in the box. Clear it! You can do without any aim whatsoever, I don't care if the ball goes to Sirigu. Another option is throwing your body at the ball to try and block a shot. Whatever you do, don't stand still and gaze on as Lech Poznan Palermo waltz into a tap-in goal. It's absurd. If I was Delneri, I'd station Momo Sissoko about 25 yards out, and have him pepper the goal with strikes. None of them are going in, so the entire practice session would be about watching deflections and stops, and getting it back out to him. It could also serve as a lesson for Momo- sit outside the opponents box, and try and collect loose balls. Seriously, that whole thing is annoying as hell.

I was going to move onto something here, but I'm still annoyed as hell about this non-movement in the box defensively. It's been among the whole team, and it is just a simple basic elementary error that cannot happen. When the ball is in the box, get it out. Marking your man is nice and all, but if he's sitting at the 18 and someone's about to have a free tap-in, you should probably get on it.

The ultimate positive is that this team continues to fight. I said that psychological change is our signing of the summer, last year we would have collapsed at 2-0 and probably ended up with our favorite scoreline, 4-1. Long may it continue, but the defense really needs to tighten up before that spirit breaks. The real problem isn't necessary the greenness of our fullbacks, that was on display against Bari and Sampdoria, but Lech Poznan and Palermo have been shows of mental weakness, not technical. 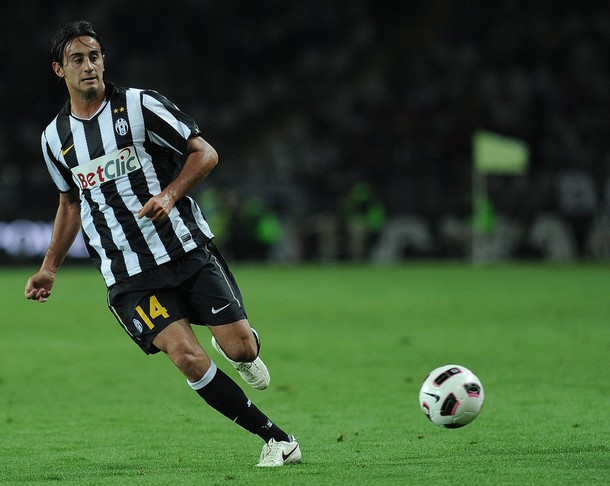 Eat your heart out, Romanistas

There were a lot of negatives in the match, and I'm going to start with some coaching criticism. First, let me get it out there, anyone who is seriously advocating or even entertaining the idea of sacking Delneri is an idiot. Harsh, yes, but true. Again, Delneri proves to have difficulties in getting the right line-up out there. ADP-Quagliarella does not seem to work that well, and that hurts. Quagliarella needed to be subbed because he was completely anonymous, and why Delneri subbed Del Piero off, our best player, is beyond me. I hope it's not to focus on Cagliari, because we need to take the games as they are coming. Iaquinta probably should have started, at the very least, he draws more attention from Bovo and frees up the other players around him.

Aside from that, I have no real complaints about the starting lineup. Here's a question though, why the hell wasn't Lanzafame on the bench? I'm not just disappointed because the kid has talent, it was stupid. We had two CBs (Rinaudo, Legro) on the bench, but no wingers! Not surprising that Delneri had to abandon his 4-4-2 at half-time. Baffling decision, especially given Lanciafiamme's ability to play up top.

Storari: 5.5- Only real criticism is that perhaps he should have parried the ball toward the sidelines more, but he made some decent saves. Not his fault we conceded 3, that's for sure.

Motta: 4.5- I thought Marco was unfortunately just completely awful yesterday. He left far too many gaps at the back, his crossing was miserable (except for the last one to assist Iaquinta) and was scorched by Pastore for what could have been the game-ending goal, instead it only hit the post. Just fell on his ass. Didn't receive much help from Krasic defensively.
Chiellini: 5.5- Indecisive at times, not a particularly good game.
Bonucci: 5.5- Never really managed to get into the game.
Grygera: 5- Too timid going forward. Didn't get schooled defensively, but didn't look assured either. Given his history with Palermo, it's an improvement.

Krasic: 6- Datasport seems to think that he won the duel with Balzaretti, but after the first 30minutes, I'd say Balzac came out a bit ahead. Terrific battle between the two, Krasic ran hard at Balzaretti and delivered some good crosses. Ran the entire length of the pitch but couldn't finish. Another good performance, against one of Serie A's best left-backs.
Felipe Melo: 6- In the first half, Melo was pretty poor. Delneri seemed to have gotten him to do what he wanted in the 2nd, but this hot-and-cold is really not helping out. He needs more consistency.
Marchisio: 6- Melo made mistakes in the first half, whereas Marchisio was just out of position for most of it. Like Melo, improved significantly in the 2nd half and that led to sustained pressure on Palermo.
Pepe: 4.5- Never managed to beat Cassani. Had one positive moment, rightfully taken off at half-time. Given his inability to beat a man, there's been a lot of discussion that he could be Zambrotta'd, and become a terzino. I always thought maybe his Azzurri call-ups were because he couldn't be transformed into a fullback, and thus, remained one of the few natural wingers for Italy. Not a bad idea, he's a decent defender and occasionally has good offensive moves.

Del Piero: 6.5- Ran hard, played hard, sacrificed for his team. Great shots on goal, hit the cross bar, and was wrongfully denied a penalty. Great performance, but why was he taken off?
Quagliarella: 4.5- Utterly anonymous the whole game. 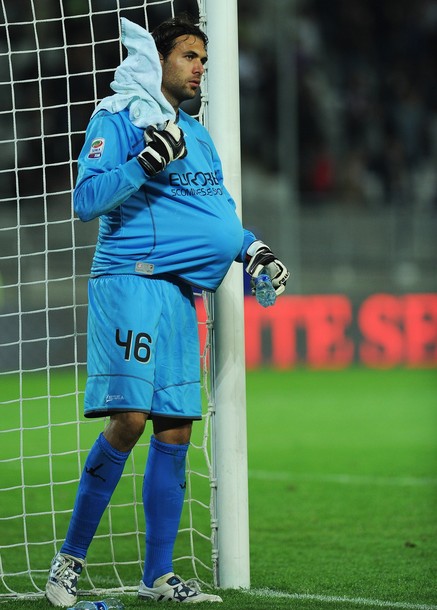 Sirigu has been putting on the pounds lately

Aquilani: 5.5- Didn't give the team any more of a tactical shape, had little effect after coming on.
Iaquinta: 6.5- Played on the left-side of a 4-2-3-1 when he first came on, which isn't his best position. Moved up top later, scored a nice header. Not to slag too much on Amauri, but what Amauri couldn't do with 4-5 headers (1-2 which he should be able to bury) Iaquinta did with one. 2 goals in 2 games, he is starting to get into form. Don't get injured now.
Amauri: 5.5- Made his comeback from injury, so I don't expect much of him. (Not that I normally do) Got into a few good positions here and there, but didn't have the finish.

Delneri: 5- Didn't get the starting lineup right. Took out ADP when he was the best player. Conceded another 3 at home. There's a lot of work to be done. 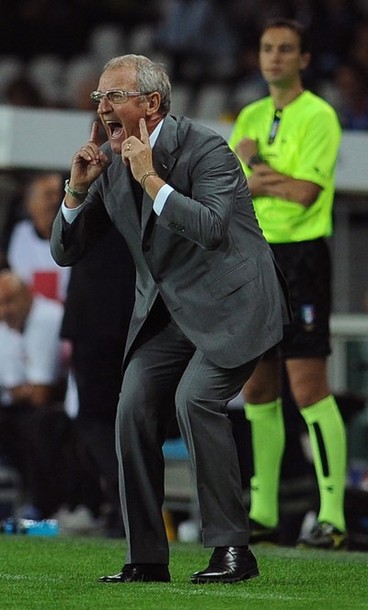 #1- You could hear Delneri on the pitch screaming at various players during the game, on the stream I watched. I made out 3 things-

a. "Motta, se non puoi spingere, non farcela!" Basically yelling at Marco Motta to watch his defensive spaces more.
b. KRASIC! KRASIC!! LI! LI!" He said this a lot. Was rather unpleased with Krasic's defensive coverage, kept yelling at him to move back and help back Motta.
c. (at Storari, taking a throw-in) "NOOO!! NOOO!" Fairly obvious.

#2- While very disappointed, I still have a lot of faith in Delneri: He knows things are not going well, and from what I heard of him yelling at the players, and his post match conference, he knows exactly what the problems are. Pepe and Cassano both said Delneri's tactics take a while to settle in, and he's right. Last week we saw the potential, this week we saw the misfortune. He's a good tactician, but rebuilding takes time.
#3- We deserved a draw: Our team should have had a draw. Just before half-time, at 1-0 down, Del Piero had a clear penalty denied. Going into the break with a newly scored goal at 1-1 is a different game. Either way, we were a different team in the 2nd half. Difference? Palermo took their chances, we didn't.
#4- Maybe Legrottaglie would have been a better option: Against a creative 4-3-2-1 with two trequartistas, I think a sweeper/man-marker would have been a better duo than two man-markers. Bonucci and Chiellini struggled with Ilicic and Pastore, if Chiellini marked Pinilla/Pastore, and Legro played more of a roaming role, could have been better. Who knows for sure.
#5- It's Wonderful to have a fan as your President:

“The squad is not up for debate. We have focused on youth, so it's normal that there is less experience. But let's give it time. “The team is conscious of its own quality. It only needs to find continuity. There is harmony. You see that we are creating a group. That can be understood in many ways, including the fact that even yesterday the team fought until the last minute and then went under the curva to receive the fans' applause.” Casting his eye over Juventus' new ground, Agnelli said: “Here you see the Juventus of the future. Today we have visited the building site together with our advisers.

Have faith, ragazzi. It may take time, but we are building something.