Delneri's Press Conference: We are Juventus, not a Provincial Squad

Share All sharing options for: Delneri's Press Conference: We are Juventus, not a Provincial Squad

Just for the record, there is apparently no English-language spellcheck over at Juve HQ. Errors all over the place. (That I have fixed) Delneri's presser after the jump. 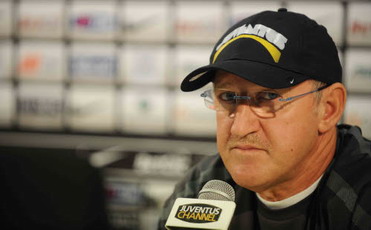 «It would be out of place to be overconfident. We haven’t done anything yet. We are working to obtain the best results and we must spoil ourselves after a victory or feel disheartened if we lose. This risk, however, as far as we are concerned, does not exist. We do not feel enthusiatic easily but we simply think of working». Gigi Del Neri, who on Thursday night will be celebrating his 700th time as professional coach, immediately cleared the fact that the victory against Udinese must be a point of departure and certainly not a reason to relax. The coach sees the team as being charged-up and in form and wants to take advantage of the moment, and this leads us to think that he will not be adopting a turn over against Palermo:

«Taking advantage of the psychological qualities when a player is well is more important then the physical state. If he does not have the right state of mind he will not run». For this same reason, Del Neri explained that he worked very hard in the last few days: «When things go on well there is more disposition. If the team is serene you can work better because results give credibility to what you have done. Therefore I prefer working harder when we win rather then when we lose». In midfield it seems he will be confirming Marchisio and Melo: «They are in very good condition and therefore they will be playing. I have faith in all of my players and Aquilani, Sissoko, Melo and Marchisio are all excellent but it seems to me that the duo that played up to now gives me ample guarantee and therefore there is no sense in changing. How I managed to transform Melo? He transformed himself. He found an environment which welcomed him, a good relationship with the public and has the right behaviour for a champion. I am sure that Juventus in this championship will create an important group».

Luckily the condition of the bianconeri is improving: «They are all well. The problem is that who returns must find consistency in performance. Amauri? The important thing is that he is available also because we are busy on different fronts and there is room for everyone. Martinez? He still has to work. I hope he will be available for Sunday. What I think of Krasic? He is a player capable of great runs, very physical but even though he does not have the characteristics of Milos, even Pepe played an excellent match in Udine by sacrificing himself. I like to take advantage of the characteristics of an individual player who distinguishes himself but also of those who work for their daily bread. Sometimes it is not only quality that counts but even quantity can change the destiny of a match».

On Thursday we will be needing the best Juventus against Palermo who on paper is one of the trickiest teams of the championship: «Difficulties are not only on paper – corrected Del Neri -. Those which Palermo will create are real. Juventus must know that every Sunday is an exam and exams are passed with strength and respect for your opponents and therefore we do not expect Palermo to be strong only on paper but even on the field. Pastore? He is a great player. You must guard him well but we will definitely not be marking him man to man. Besides he is not the only one: there is Maccarone, Ilicic...they played a great match against Inter...it will be a delicate match because Palermo has players of great potential».

After Palermo it will be the turn of Cagliari, then Manchester City and Inter: Juventus is about to embark on a tour de force which could say much about the potential of the bianconeri: «We still need a bit of time but not to define Juventus as much as to define the championship for which we will need the whole first round...I expect daily improvements. We must not take anything for granted if not the fact that we must give our best in every match. We must play like Juventus every time. The rest is simply chit chat. At the end we will draw our balance». Finally in response to those who insist that his Juventus is like team from a province, Del Neri replied: «Juve is not like a team from a province but a down to earth team which means quality but also a will to work. This was made note to me on Sunday and I felt flattered».