Season Starts at a Crawl

Share All sharing options for: Season Starts at a Crawl

Well, that was unpleasant. 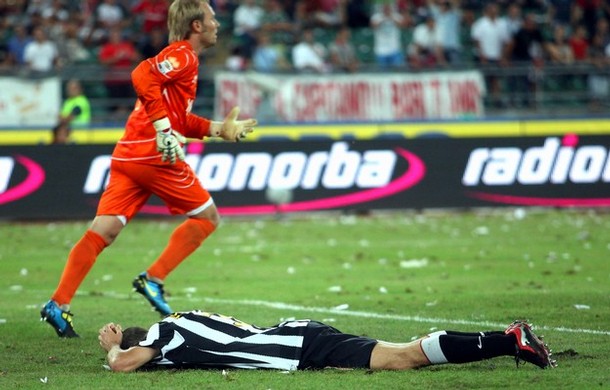 Juventus opened our new season with a loss, the first time that happened since 1982. Did we deserve the loss? I don't think so, Bari were better, but not massively. The game was decided by one genius strike by Bari midfielder Massimo Donati, otherwise a pretty dour game. (Side note, as a simpazzante of Bari, a giant fuck you to Donati. Guy was pretty crap all last season, and saves that for now? C'mon) I am disappointed of course, but I am not hitting the panic button yet. First, Bari is a tough team. They showed it last year, and turned the San Nicola into a fortress. Even with a better team, this is a game we'd be looking at drawing. Second, this team is new, and it needs time. Particularly some players who have been here less than a week. (Ahem, Marotta) Either way, I'd rather start low and crawl up, then defeat Roma 3-1 on the 2nd matchday and have everyone naming us for the title. This game did prove though, that despite some enthusiasm for the mercato, we're definitely very much fighting for the Champions League this year. The Scudetto is still far off.