It's finally happened. There were no smokescreens, no Birmingham-style transfer collapses, it happened. Ciao, Diego. We hardly knew ye. 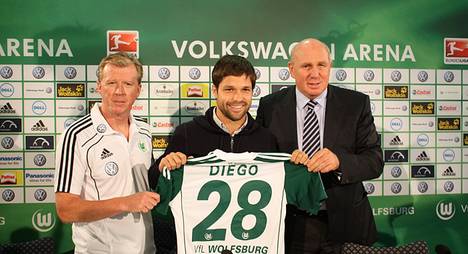 Diego signs with the 'Wolves'

The transfer of Brazilian playmaker Diego Ribas da Cunha to VfL Wolfsburg has been finalised. Diego signed a four year contract late on Thursday evening, binding him to the club until June 30th 2014. The midfielder returns from Juventus Turin to the Bundesliga, where he was active for Werder Bremen between 2006 and 2009.

Forget the formation he supposedly couldn't fit into (evidently not deserving a shot at it, or a second year in Serie A), forget the fact that we're selling him one year later for a 10million euro loss, and forget that an aging Del Piero and perhaps, a wildly inconsistent Quagliarella will be providing the assists this year. I am utterly, utterly disappointed in Delneri, Marotta, Juventus...and perhaps Andrea Agnelli as an extension. One of the most naturally gifted players in the world, and we cannot be bothered to make the effort to accommodate him, hell, we don't even have the patience to give him another year.

The signs were there from the beginning- I made a comment in early May that "selling Diego will be a colossal mistake." And I said that because it seemed that Marotta and Agnelli didn't particularly care for him. Or Delneri, who at Porto in 2004 reportedly said "Diego? Great player, but will not play under me." All that talk about him playing like Cristiano Doni or his willingness to play a 4-4-1-1, well, obviously they were full of crap. Or the comments just ONE week ago in which they denied Diego was on the way out:

“Diego will remain with Juventus,” said the Coach in his Press conference. “He has proved that he can play in this team and we are happy about that. “The transfer rumours have nothing to do with us. Will he play tomorrow? Seeing as he is a Juventus player, I don’t see why I shouldn’t use him.”

It annoys the hell out of me, but Marotta was just thoroughly out-negotiated by Wolfsburg. At the beginning of the summer, we were putting pressure on them for Dzeko, with Diego as makeweight. And those negotiations continued for some time, being off and on, off and on. And then suddenly, there was a shift. Marotta had apparently accepted that we wouldn't be getting Dzeko, but out of nowhere Wolfsburg were in Torino, negotiating for Diego. And Marotta initially refused- after all, he started the negotiations to get a great player, not solely to sell one. Then, Marotta was rumored to have negotiated. Wolfsburg started with 16.5million, and Marotta refused, demanding 20million. Two weeks goes by, and he seemingly panics and sells him for LESS than Wolfsburg initially offered. 15.5million, straight cash. And it does not appear there are any performance-related bonuses. Marotta, I'm sorry, but you just got punked. You're not at Sampdoria anymore, welcome to the big leagues.

Diego can't shoot or finish, so they say....

Utterly baffling. We're willing to accept a 10million loss on a talented player who always gave his best, but not either of the other two, far more useless Brazilians who are coming off dreadful years. I'm sure we could find a club interested in Felipe Melo for 10million. Diego's replacement appears to be Fabio Quagliarella, a Torino youth product (which I don't mind) but also a man who is more appreciated by Napoli for the fact that he's a hometown boy, rather than, y'know, his performances on the pitch. Fabio is currently in Torino right now, undergoing a medical. He's predominantly known for two things: his Playstation-style goals, and his wild inconsistency. Is he good enough to play for Juventus? I don't think so, but one can always hope that a player struggling for Napoli will somehow improve his game when he moves to a bigger club.

I apologize for being so pessimistic, but Diego is truly a special player. He was very influential last year, and tasked with carrying a side containing dreadful strikers (Amauri in terrible form, Del Piero taking until January to score, Iaquinta permanently injured, Trezeguet injured off-and-on) and an even worse midfield, with no technical proficiency. This was predicted by me (read the comments section there...) and not surprisingly, Diego, who was announced as the coup of last summers mercato, is on the way out after only one year- a pretty poor form of treatment from our management.

In other depressing news: 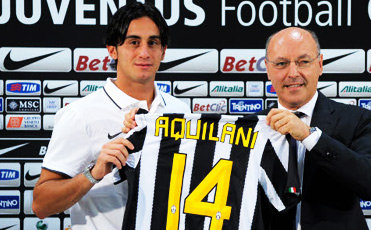 #14, really?? Everyone remember who was the last person to wear that #?