Massimo Moratti, resident scumbag of the universe, recently made an interesting comment when asked about the fact that Inter has no Italians in their team. "Better foreigners than cheaters." Obviously, this is in reference to Calciopoli (in which his club was equally culpable) and the fact that Juventus are rebuilding with an Italian core. While they have sold one of the most talented Italian strikers of recent years (though I can understand the reasoning) we have signed Bonucci, Motta, Pepe, Aquilani, and Storari, all players who may have a future in Azzurro. 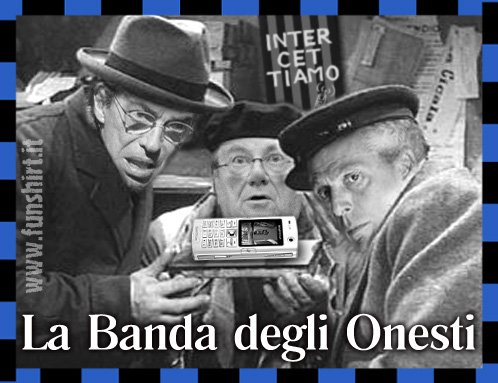 Moratti would never do anything un-sporting.

His choice of words is curious, considering two things that have come out recently. First, a brilliant article over at the Swiss Ramble outlines how deeply in debt Inter is, in contrast to Juve's robust financial situation. We are coming off a 5-year period in which we were relegated, and had 1 1/2 seasons in the Champions League, whereas Inter is coming off a treble-winning season. Yet we are still far more profitable, and will continue to be so when the new modern Juventus-owned stadium opens next season. Moratti has sunk over a billion euros into Inter...something many believe to be "financial doping." Many consider that a form of cheating.

Another form of cheating is fielding ineligible players, which happens typically when there are restrictions on certain nationalities in the league. Typically, FIFA cancels the result and awards a 3-0 victory to the opposing team. Inter have been repeatedly guilty of this in the past, fielding Alvaro Recoba and Luciano/Eriberto with false passports. When pressed, of course Moratti claimed "he knew nothing" as if Inter had no idea that they had players with fake documents. Curiously enough, ex-Interista Maxwell has been summoned by FIFA to Switzerland to explain his situation. It turns out at Inter he was registered as an EU player with a Dutch passport, whereas Barcelona registered him as a non-EU citizen as it turns out his Dutch passport "seems to have vanished." It could be a bureaucratic oversight...but given La Liga's strict quota's on non-EU players (one would imagine Barcelona would press him a bit more to register him as a EU member) and Inter's history, it very well could be yet another illegal player that Oriali "helped out."

Moratti claims Juventus fixed games and thus are "thieves" but he should take a look at his own club first. John Elkann, President of FIAT and cousin of Juventus president Andrea Agnelli put it perfectly today- "Inter never knew how to lose, and still haven't learned how to win."