Rumors: Aquilani on Loan to Juventus?

Share All sharing options for: Rumors: Aquilani on Loan to Juventus?

Whoa. This has come out of nowhere.

But the pieces were all there, right? After getting rid of Poulsen, Tiago, and selling Ekdal, we needed a central midfielder, and yesterday showed that we needed a little more creativity in central midfield. Marchisio looked kind of tired out there, it seems last season and the World Cup might be taking a toll on him, and well, when the CM partnership was Sissoko-Melo, we knew nothing was going to happen there. It's where simple passing and common sense go to die. As we were struggling over in Austria yesterday, Roy Hodgson announced that Aquilani may go on loan to an Italian club. And why not a rebuilding club in need of creativity, one committed to playing Italians? Hence the rumor...and hence why it isn't a sure thing. It could be the Corriere simply connecting the dots, and Aquilani is in fact signing with Albinoleffe. Only time will tell. 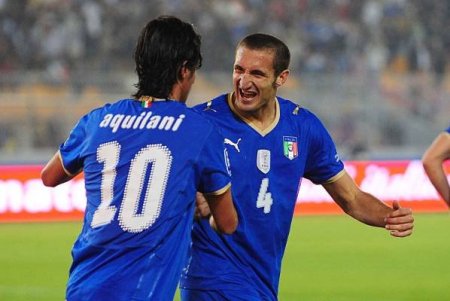 So Aquilani on loan, with a right to signing him in full. We were heavily rumored to have been interested in him two years ago, I'm sure his price has dropped significantly since. Roma did smart business last summer to sell him, certainly at his peak price. Is he the right signing for us? Well, he never seemed to have the attitude or consistency of say, his teammate Daniele De Rossi in maturing into a world-class player. But he does offer the creativity and range of passing we so desperately need in center midfield, without compromising us defensively as a "pure regista" might do. So there's no doubt he's a good signing, regardless of his attitude (if Felipe Melo is still here...) assuming he can stay healthy. Which of course is a very big "if" given our recent history and Alberto's, one would hope his year of sitting on the bench has resolved any long-term injury problems he had. His medical should be very thorough...

What does this mean for Marchisio? Will the Prince of Rome overshadow our very own "principino?" I doubt it. I would say Aquilani may be more naturally talented than Marchisio, but his attitude, injuries, and inconsistency have slowed his progress. Claudio I think is just suffering a little fatigue from an exhausting last 12 months and a disappointing World Cup, he will come back into form. I don't think he will be supplanted in the starting lineup, Delneri knows his quality...one of the first things GDN said when he arrived was "I will build Juventus around Marchisio." But as an alternative to Marchisio, (healthy) Aquilani isn't a bad option at all.

Another thing painfully obvious from last night is that Pepe is a very average player. The jury is still out on Martinez who continues to struggle with fitness, but Pepe isn't good enough to be our starting player. Hence the arrival of this guy:

Recommendation for Milos, in all seriousness- cut your hair, or dye it. Comparisons with Nedved will not end well for you.