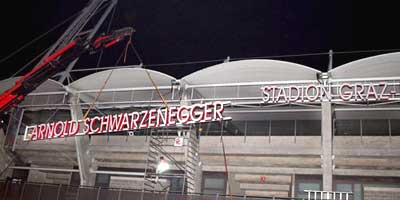 Later today, Juventus will play the first leg of their last play-off against SK Sturm Graz en route to the Europa League group phase beginning September 16th. The Austrians are already 4 games into their top-flight campaign and sit second, two points behind Josko Ried. Because of their early start, we’ll have to be acutely aware of their fitness levels and approach the game with the same amount of determination. More information about this tie after the jump.

SK Sturm Graz is an Austrian football club that was founded in 1909. Graz is Austria’s second-largest city behind Vienna, and the capital of the federal state of Styria. It has a population of 291,890 as of 2010, and has a long tradition as a student city as evidenced by its six universities and more than 44,000 students. In keeping with the city’s student theme, SK Sturm Graz saw most of its success using young players from the club’s academy beginning in the mid-nineties under Bosnian football manager and former player from the former Yugoslavia, Ivan Osim.

Since Osim left in 2002 due to increasing criticism from the club’s President, SK Sturm Graz has never been the same. After some modest European success, the added revenue was never re-invested in the youth academy and was squandered on fruitless talent. Eventually, SK Sturm Graz filed for bankruptcy on September 1st 2006. As of today, the team is coached by German manager Franco Foda, and share a 15,400 seat stadium with their local rivals Grazer AK. Until 2006, the stadium was named after Arnold Schwarzenegger who was born near Graz but was re-named in February 2006 to UPC-Arena.

“It’s a special game for me and will be more emotional than usual,” our very own Austrian, Alex Manninger, told Juventus Channel. “We’re going to play in a beautiful city where football is passionate and the stadium, albeit small, will be packed. Within two days of the draw, the tickets for this game were sold out. For them the meeting with Juventus is the match of the year.”

“Many people have asked me for information about Sturm Graz, but I’ve been away from the Austrian League for a long time. Their Bundesliga only has 10 teams who face each other four times per season. The level of football is clearly inferior to Italy, but our opponents will be more physically fit after a month of official games. They’ll give it their all, run a great deal and try to play attacking football. We must be careful, but I am confident. If Juventus put their superior quality on display, we will return with a positive result.”