Tiago is also a Moron, but we already knew that

Share All sharing options for: Tiago is also a Moron, but we already knew that

It's apparently moron week here at the Juventus Offside, as players and agents try to one-up each other in displays of incompetence. Word is that Delneri has sent Felipe Melo to Mongolia for the week, to attempt to keep him out of the contest. FYI- the new official Juventus Offside term for "moron" is going to be Bill Cosby's favorite term "knucklehead." So Tiago and Camoranesi's agents are now knuckleheads.

Tiago has fired a parting shot at Juventus following his move back to Atletico Madrid on loan. The Portugal international seemed to revel in the idea that Juventus couldn't sell him outright. Tiago has made no secret of his annoyance at the way Juventus have treated him in recent years. Speaking at his second official unveiling as an Atletico player, Tiago said: “Atletico and I are happy, but in the end Juve will be a little less so. I am very happy. It was very difficult for me, but in the end I got what I wanted. I believe that we are much stronger than last year. 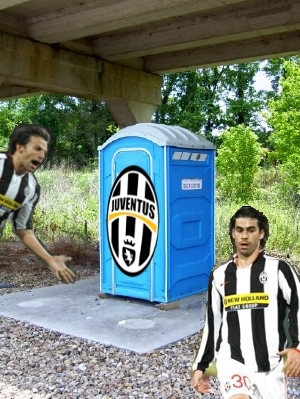 The Juventus Offside exclusive on how the prior incident went on.

For someone who has NO personality on the pitch, he has a large amount of it off the pitch. You all may remember when he LOCKED our club President in the bathroom for trying to make him sign with another club. I didn't understand why he did it the, and I don't understand why he's being such a bitch about things now. Tiago has nothing to complain about at Juventus. At one point under Ranieri AND Ferrara, he got his time to prove himself, and failed to do so. He was never verbally assaulted by the fans like Felipe Melo or Z3BINA. And now, we try and offload him to a club he wants to be playing for, and he acts like a complete ass about the whole thing.

Either way, between the Tiago and Andrade experiments, here is a new official policy for Juventus.