Another one (temporarily) bites the dust

Share All sharing options for: Another one (temporarily) bites the dust 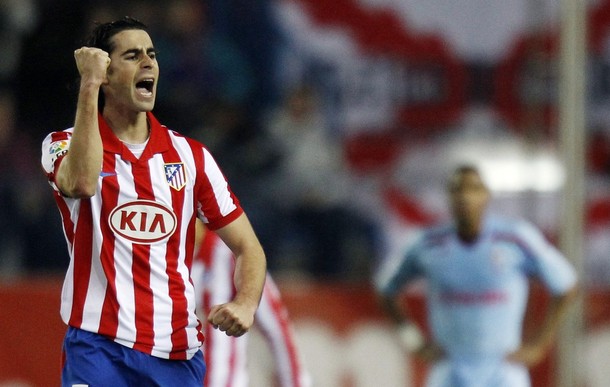 Yes! I can keep my extraordinarily high salary!!

After months of negotiating, Tiago is finally out the door. But unfortunately, not permanently.

Tiago has returned to Atletico Madrid on loan, with the payment of 500,000 euros for the loan, curiously, without a fixed price for Atletico to purchase. This will be the 4th season of his contract, and as he signed a 5-year contract back in 2007, it means we may be stuck with resolving his future again next summer. The good news however, is we won't have to see his face, but also that Atletico have agreed to pay his full salary, which means 2.6mil off the books. (3.1mil net positive for the next year)

Why didn't we put a fixed price? Because, we're willing to go low, and honestly, we might just cut him a free transfer next summer. The original fixed price was 6.5million, which Atletico were I believe willing to go to, if Tiago lowered his salary demands. He didn't, and we dropped his price to 4.5million, but I think ultimately, they didn't want to sign him into a multi-year contract at his high salary. Atletico Madrid only have four players who make more than Tiago was demanding, only two significantly higher, who are of course Aguero and Forlan. Atletico probably would have signed him to 2.6mil (net, not gross) for a 2-year contract, but I'm sure Tiago wants a longer one. They'd have signed him to a 4-year 1.5mil or so, but he wanted more money. So in exchange for economic security, Tiago has another year of living out of suitcases and keeping the movers number on speed-dial.

So a situation that solves things for now, which is good enough. Now for Z3BINA and co...