Delneri's Juve: What is his vision?

Share All sharing options for: Delneri's Juve: What is his vision?

There are a lot of comparisons between Delneri and Fabio Capello. They are both cabbage men, as Special 1 TV would put it. They are both Friuliani, which by extension means they are incomprehensible and approximately 82% German/Slovenian. (No coincidence that at Real Madrid/Roma, Cassano had issues with both of them) And lastly, both are strict believers in the 4-4-2. Thus, some Juventus fans have groaned that we're going to see defensive, boring football ahead of us, though that is not really the case. Below, a run-down on how Delneri likes to structure his team, and how it may apply to Juventus. 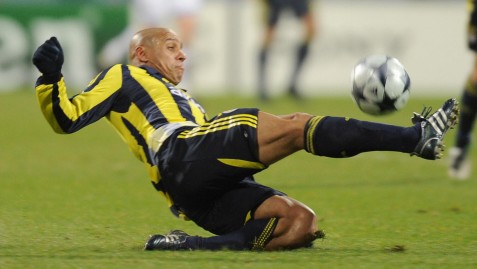 Unlikely to see any Roberto Carlos-style fullbacks in the team

As far as the defense goes, Marco Motta outlined Delneri's philosophy on day one. "Above all, the mister reminded us that we are defenders first." Fullbacks, particularly, are required to be defensive-minded first, as Delneri likes his defense to be compact, allowing little space to the other team. That also applies to the center-backs of course, and while Chiellini and co will certainly advance on set pieces, we won't see any Giorgio-as-sweeper experiments in the future. Delneri likes his teams to keep a clean sheet, and that starts with defense. Motta and De Cegie are attacking fullbacks, of course, they are young, but both have spoken of the personal attention Delneri has been giving them. He's got his work cut out with them, but we can be encouraged with what we've seen in preseason thus far.

If the fullbacks are generally more defensive, it is the opposite among his wingers. Delneri has always built his team based heavily on his wingers, be it Manfredini and Luciano back at Chievo, or Ferreira, Langella, and Valdes at Atalanta, or more recently Mannini, Guberti, or Semioli at Sampdoria. When asked about his instructions for wingers he said "between another striker and another defender, I prefer the former." Indeed, his 4-4-2 in attack switches very much into a 4-2-4, with limited defensive responsibilities for wingers. It is obvious that this choice has influences the mercato, Lanzafame and Martinez are both attacking wingers that can even play in a 4-3-3 up top or as a seconda punta. That isn't to say he doesn't want his wingers to track back, during preseason Lanzafame has defended his flank and Pepe has shown his "workmanlike nature." But between defense and offense, he clearly prefers attacking wingers. This is particularly important when you consider what happens when the ball is moved down a single flank. 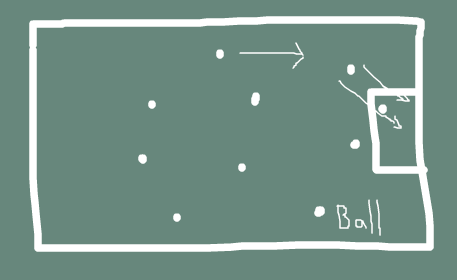 Say the ball is moving down the right flank in Delneri's system. Often, you'd see the right-back make overlapping runs and the left-back holding back to make up a 3-man counter buffer, typically the CBs (if one is forward, say on a set piece, then a CM) and one FB are meant to slow down counter-attacks. In Delneri's system, I think we'll often see the right-back providing support, but not making runs constantly in the corner. Instead, you'll see the left winger running into the box as an additional scoring threat, and the left-back will move up a bit to occupy the space he left. It's nothing earth-shattering new, but compared to Capello and Ranieri's 4-4-2, the wingers are given much more freedom to attack the box.

As for the midfield, I think we'll see a situation similar to Ranieri's Juve, not as much like Capello's Juve. Ranieri was criticized for fielding two defensive midfielders, but that wasn't really ever the case. He basically had one pure central midfielder, and a defensive midfielder with a decent passing ability. Tiago was supposed to be the 2nd, Zanetti ended up taking the place, and in the first year Nocerino was the central midfielder and followed by Marchisio. (Case in point, look at our first game back in Serie A- Nocerino makes it all the way to the byline to cross it to Trezeguet. Later it became apparent he wasn't really very well rounded.) Last year we desperately needed a regista, as I whined about plenty on this blog, and that's where Felipe Melo's inability became obvious. He will suit much better into Delneri's system, where he will likely play the Zanetti role, of a defensive midfielder with an occasional eye for a pass. The playmaking burden is largely removed from the central midfielders and transferred to the flanks, hence the lack of a need for an out-and-out regista in a 4-4-2, particularly one with a heavy emphasis wingers. Filling the pure central midfielder role will of course be Marchisio, who Delneri said he intends to build much of Juventus around. Sissoko will probably be the (not exactly like-for-like) substitute for Melo, and perhaps Ekdal will remain with Poulsen's sale as Marchisio's reserve. I don't know who he plans to use their otherwise. 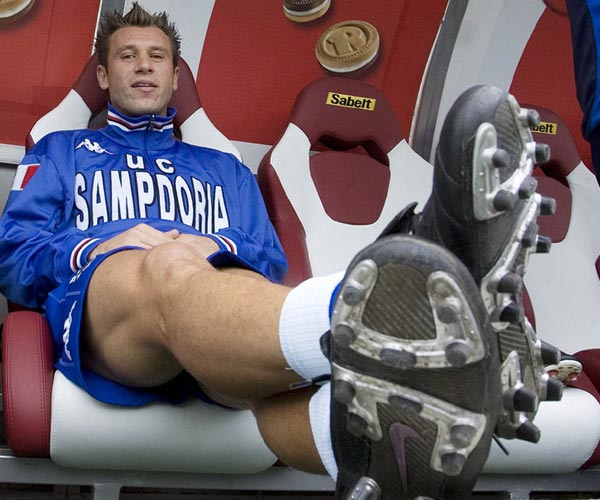 Cassano on the bench last January, as Delneri tinkered with the offense

Up top, it's simple. Delneri uses what works, and that is typically a classic pairing of a seconda punta and a prima punta. At Sampdoria, it was Cassano and Pazzini quite clearly, and it worked excellently. Cassano started the season drifting wide and not entering the box much, but Delneri converted him into a more central, more clinical striker. That's not to say Delneri is not up for alternatives, though. At Sampdoria, the team struggled greatly in the dead of winter, going weeks without a win. Everyone assumed the team had gone bust, more or less, after an excellent start, and Delneri did the "unthinkable" and benched Cassano, opting for Nicola Pozzi and two prima puntas up top. It's not pretty, but it's a much more physical approach and it started to get Sampdoria some points on the board again. At that point, Cassano was reintroduced into the team.

So where does Diego fit into the attack? The media would like to think he doesn't, but he does. Delneri said, "I would play a trequartista behind one striker, but behind two, never." Anotherwords, he's not a fan of the 4-3-1-2 or the 4-3-3, but we already knew that. Everyone however has forgotten the first portion, and that's where Diego fits in. There is plenty of history, too. At Atalanta, Delneri played a 4-4-1-1 with mercurial Atalanta captain Cristiano Doni as that trequartista, and talented central forward Sergio Floccari as the man leading the line. A switch between a 4-4-1-1 and a 4-4-2 is not difficult, and it simply depends on who is playing. If Diego is, it'll be more of a 4-4-1-1 with him playing behind the prima punta, rather than around. If Del Piero plays, it's a standard 4-4-2 as he's a far more clinical striker, equally adept at banging them in as much as setting them up. At prima punta, Trezeguet, Amauri, and Iaquinta will all fit in naturally. Trezeguet of course offers the poachers angle, Amauri, the power in the air (hoping for some good crosses), and Iaquinta the pace to run onto through-balls. 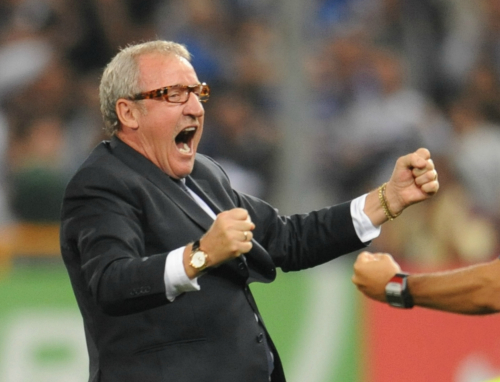 Delneri gets excited about clean sheets

So what is similar and what is different between this and Ranieri/Capello's 4-4-2s? Similar is the compactness. The team plays together, like a team, defending and attacking together. There is a strong desire for cleansheets, which will come as a welcome surprise after last season. There are two things that a tactical 4-4-2 side can do, and certainly did under Ranieri and Capello, that Delneri will aim for. The first is an ability to hold out leads. Perfect example of this would be our victories against Real Madrid, where we were under immense pressure for significant portions of the game, but did not crack. Not even when Van Nistelrooy scored. The second, is a strength at scoring, and defending against set pieces. During Capello and Ranieri's era, the tactical discipline meant we took advantage of many set pieces, at the same time it is hard to think of many we conceded, rather, our weakness was generally on the counter-attack. (particularly for Ranieri) Delneri aims to resolve this by keeping the fullbacks defensive, but it also resolves by the refreshing of the squad. We had a fairly old team under Ranieri, and a lot of times they were simply too slow or tired late in the game to track back fast enough on the counter. I think we will find this refreshing- last season, we were pathetic at defending set pieces and more importantly, if pressure was against us, we would crack, and the floodgates opened. Games against Napoli, Bayern, and Fulham showed when we were under sustained pressure, at some point it would just all come apart. We could not hold our own.

How is it different from their systems? It's more attacking, and more based on wing play. The fact that we don't have the world-class wingers we did 5 years ago is a knock, but not a complete failure for the system as wingers who are quick are similarly important to excellent dribblers. 4-2-3-1 fans, rejoice. Given Diego playing deep at trequartista, and the attacking nature (both tactically and amount of goals they've scored in the past) of our wingers, the 4-4-1-1 is more likely to resemble a 4-2-3-1 (particularly on offense) than a Capello or Ranieri style 4-man midfield. 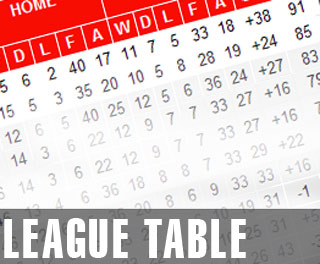 How have his teams looked in the past, as far as statistics go? His defense clearly is tight. Last year, Sampdoria conceded the 3rd least goals in the league, only 2 behind 2nd place. In 2008-2009, Atalanta conceded the 8th least amount of goals, though finishing in 11th. It's no coincidence that the next year, Atalanta conceded far more and were relegated. At both Chievo and Atalanta, however, his first season had a relatively "high" level amount of goals conceded, by "high" I mean that expected, rather than a tight defense. We can probably attribute that to the lag of a team transformation that a smaller team forces, it takes far longer for Chievo to change their team than ourselves. As far as offense goes, Sampdoria didn't light the world on fire last year, finishing a relatively miserly 9th in the scoring charts, though I would attribute that to a lack of depth for the wings and offense. At Atalanta, his team scored a few more goals than their placing in the standings, which is probably what we should expect. We shouldn't expect Barcelona-style scoring, but we will score the appropriate amount of goals, assuming Delneri can extract the best from our forwards.

I've said enough, but I do have faith in Delneri. He's a solid coach, and if his mission is to get us into the Champion's League, he is a good man for it. Like Ranieri, there are questions over whether he can inspire his team with the confidence or odd tactical change necessary to win the league, but that's not what we're focused on this coming season. We fight for 3rd, and in March if we're at Inter's level, then we can start thinking about the Scudetto. Of course, this is his vision for Juventus- whether he gets us playing it is a whole different situation, and that's one we'll simply have to wait for. Personally, I can't wait for the season to start.