Hoping Against an "Auf Wiedersehen" for Diego

Share All sharing options for: Hoping Against an "Auf Wiedersehen" for Diego

Which is German for "we're going to rob you blind of a brilliant player, leaving you with limited creativity up top."

Rumors have been swirling even more and more that Diego is indeed being offloaded back to Germany, back to Wolfsburg for 16mil while Marotta looks at Bastos for 22mil. It has been compounded by a cryptic statement from FIFA agent Giacomo Petralito, who facilitated the move from Bremen. "There should be some news in the next two days. "What is the lad’s position? There seem to be good intentions. Is Dzeko now out of reach? We’ll update our information in a couple of days and I’ll be able to tell you more then." 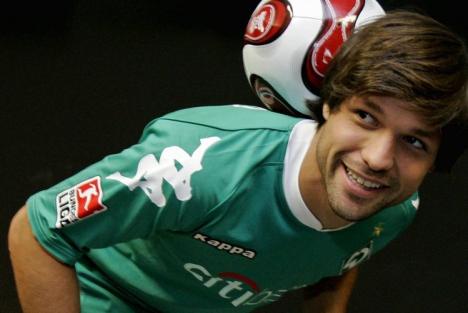 A return to a green German kit on the cards?

Yesterday I outlined why I didn't think the move likely. First, the rumors Diego had been ostracized by the squad were simply untrue. Secondly, Delneri has seem to put great faith in him, starting him in both Europa League qualifiers. Third, there is a dearth of quality up top. Should we offload Diego, we should have serious questions about Delneri and Marotta's judgement. What worries me most about these rumors is there seems to be some concrete reasons (Hoeness in Turin) and the SampJuve boys have not denied any of the rumors, unlike earlier in the summer.

Selling Diego would be a colossal mistake. Despite the media having it out for him since, oh, say September, he was plenty effective last year. Diego may not have scored a lot of goals, but he opens the game up with his intelligent passes and runs, I have no doubt with him playing behind a prima punta he would score more...but also lead to plenty of scoring chances for our wingers. Should we sell him, we will have Del Piero as a natural seconda punta...and perhaps Martinez as one who can deputize. Imagine, instead of Diego-Trezeguet next year, we could be looking at Martinez-Amauri. Not enough quality.

Diego's father (and agent) has spoken about the speculation- "My son's objective was only one: to redeem himself from last season. Obviously, he was thinking of doing it at Juventus, and they really very for him as well. We have never thought of leaving Juve, also because Diego is under contract for 4 years. Nor have we been informed of anything by the club. Obviously we read the news that Dieter Hoeness was in Turin, but it's up to Juve to let us know what is happening. At that point, we'll make our evaluations. Juventus and Wolfsburg are both two great squads."

The idea of Bastos for 22mil is even dumber, but thankfully, there seems to be little credence to these rumors, and I'll sum up why it's awful- Overpriced Brazilian who's coming off a great international tournament and would be played out of position? (He's a left-winger, not a fullback) Shades of Melo.

I still think the Diego deal is unlikely, but the quietness of Marotta and co is worrying. One hopes the whole Diego sale is just a smokescreen for something greater....