Burying the Hatchet with Amauri

Share All sharing options for: Burying the Hatchet with Amauri

Amauri has taken himself off the market. "There’s a new atmosphere at Juventus and I don’t want to leave."
The Brazilian was linked with a departure after the club pushed for Edin Dzeko, but now that the chase for the Wolfsburg striker appears to be over, he is back centre-stage. "This season even when there were rumours about my future, I remained calm. When I’m in good shape, I can challenge just about anyone. I don’t want to leave, I intend to put myself back in the thick of it." He has had a great start to the season, bagging a brace in the 2-0 Europa League preliminary round win over Shamrock Rovers. Amauri has been linked with a move to Jose Mourinho’s Real Madrid this week.

“Real’s interest changes nothing for me. I want to challenge myself in the Juventus jersey. This summer, after everything that happened last season, it would be easy to demand a transfer. I didn’t do that because I want to do well with Juve. I got the feeling myself, Diego and Felipe Melo were criticised too much [Yourself and Felipe Melo rightfully so], as we didn’t deserve to be singled out that way. Things have changed this season, as there is a new atmosphere at Juventus. We can do something great and have the champions to succeed.”

Some of that is down to new Coach Gigi Del Neri, who has changed the system to a 4-4-2. "He is very clear in saying what he thinks. He doesn’t see a difference between those who play and who don’t. I am aware of my potential, am hungry and will do everything to surpass 20 goals this season. 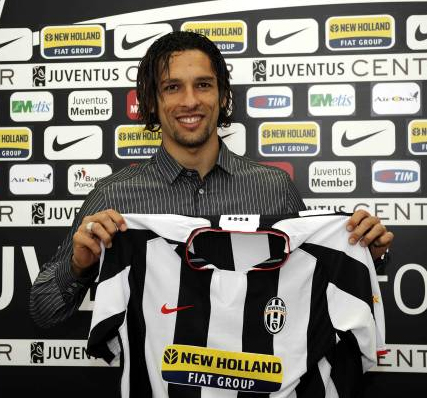 A few weeks ago I outlined a few ways that Amauri could use this summer to get himself back to the old Amauri. Essentially, a 4-4-2 and confidence are crucial for him, and scoring early in the season is a must. A double against Shamrock is a start, and a very small one at that, but he does look determined to get into form and the goals have come thus far. Between his early goal-scoring, Delneri, and the Dzeko non-story, it definitely looks like Amauri will be staying with us the next season. And while I'd still like for him to be sold, it's time to accept the fact that he won't. It's a clean slate, I won't be endlessly slagging him....for now. (Prediction- by January, I will be back clamoring for him to be sold)