Over the next week and a half, here at the Juventus Offside we will be profiling Juventini, their characteristics, and what role they play for their national team. It might not be the most useful for regular readers or general Juventus fans, but I think we Juventini are most apt, perhaps, to describe the quality of these players as we watch them week-in, week-out. The Juventus players going to South Africa are as follows: For Italy, Gianluigi Buffon, Giorgio Chiellini, Claudio Marchisio, Fabio Cannavaro, Vincenzo Iaquinta, Amauri, and Mauro Camoranesi. (Pending the last cut) For Uruguay, Martin Caceres. For Brazil, Felipe Melo. For Denmark, Christian Poulsen. After the jump, the first, for Mr. Gianluigi Buffon. 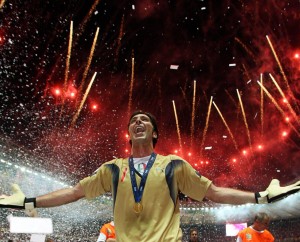 National Team: Italy, where Julian and Paul keep you up-to-date on Azzurri news over at the World Cup Blog. (Sister site for national teams, to The Offside)

Personality: Gianluigi Buffon is known as one of the most likable players in Italy and Europe. Calm, collected, intelligent, he is one of the leaders of Juventus alongside Del Piero. He doesn't lose his head, nor does he have any problem with big games, as he famously made a brilliant save both in the 2003 Champion's League final as well as the 2006 World Cup Final. Buffon does not have any enemies in Calcio, but many friends, he gets along with everyone. (except Thiago Motta) Despite Juventus being relegated to Serie B only 2 months after winning the World Cup, Gigi proved his loyalty by sticking with the Vecchia Signora, despite a very uncertain future.

Media Status: Super-famous. Over the last decade, he has been the most consistent keeper and one of the best players. Everyone who knows soccer knows Gianluigi Buffon, who of course won the 2006 world Cup. He is the world's most expensive keeper, as well as first goalkeeper to win the prestigious UEFA Club Footballer of the Year award, in 2003. 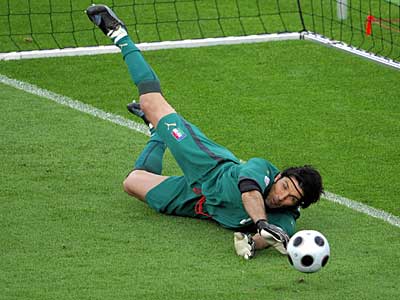 Strengths: Buffon has everything required to be an elite goalkeeper: height, intelligence, and reactions that defy gravity and logic. Legendary Italian commentator Fabio Caressa once said, "Buffon is a man who singlehandedly wins his team 15 points per season." He is rarely if ever caught out of position, and very very rarely commits errors. This season for Juventus, he committed his first major error since the 2001-2002 season. A big-game player, he is a calming influence between the sticks for his defenders.

Weaknesses: Gianluigi Buffon is quite possibly the greatest keeper of all-time, so it's safe to say he does not have any weaknesses. He is never caught out of position, rarely spills shots, and never loses his head. The only way Buffon could improve his game is in penalties, he does not have the strongest record. However, he saved several penalties in the 2003 Champions League final, as well as a critical tournament-saving penalty in Euro2008 where Italy stared elimination in the 85th minute. He also saved one against Dani Guiza in the quarter-final penalty shootout against Spain.

Status on Club Team: Iconic. For his incredible talent, as well as his outstanding loyalty to the team during its darkest moment, Gianluigi Buffon will be remembered as one of Juventus greatest ever players. 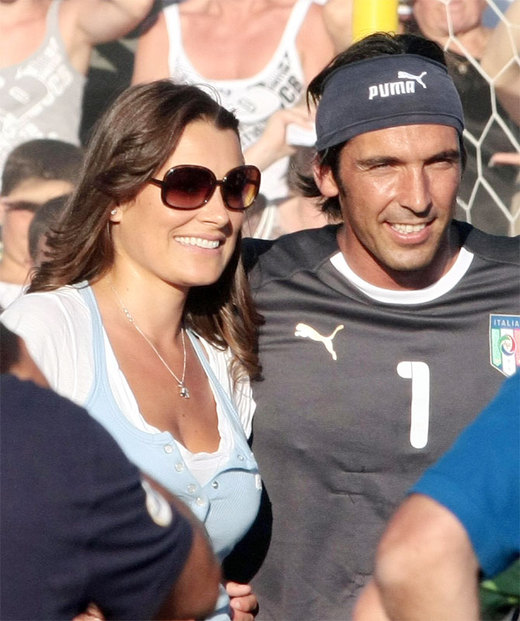 Buffon and his wife/girlfriend and Czech model Alena Seredova

2009-2010 Club Season: He started the season excellently, making miracle saves against Roma, Livorno, Bordeaux, Maccabi Haifa and others. In 2008-2009, Buffon was injured for 3 months or so, and unfortunately he suffered a similar injury this year. His second half of the season has not been as decisive as the first, but he has still been a reliable influence in the back.

Status in National Team: Legendary. One of the heroes of Italy in 2006, part of the defense that never conceded an opponents goal in open play, the whole tournament. Buffon is a player who has always performed just as well for his country as his club.

Expected Performance for National Team: Heroic. Italy's team does not look the most confidence-inspiring for Azzurri fans, but one thing everyone can count on is Gianluigi Buffon to come up big when it counts. With an average backline, it is important, as he will be under fire. The good news is he has looked great in World Cup qualifiers, this Fall when in fine form, made brilliant saves against Georgia and Bulgaria. 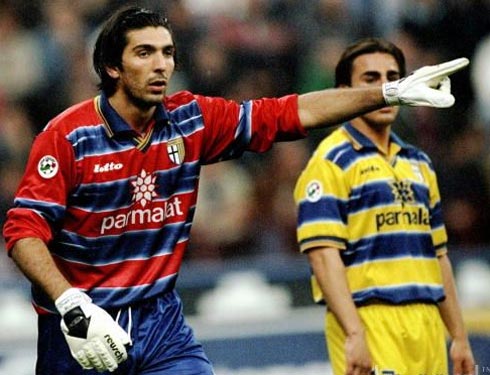 Gigi playing at an elite level with Cannavaro, over 10 years ago

In one word: Stalwart.