A Juventino's Experience of the North American Tour

Share All sharing options for: A Juventino's Experience of the North American Tour

An acquaintance of mine happened to be one of the luckiest goddamn people in the world last week, as he was selected from JuventusMember to go on a boat cruise of NYC with the Juventus team. Unlike the Toronto Gala (which was a major bust if you ask anyone who went, given that Juve didn't stay for dinner or do the meet+greet) it was pretty exclusive, I think he was the only fan allowed to go. He spent most of the evening with Juventus players, and here was his report: 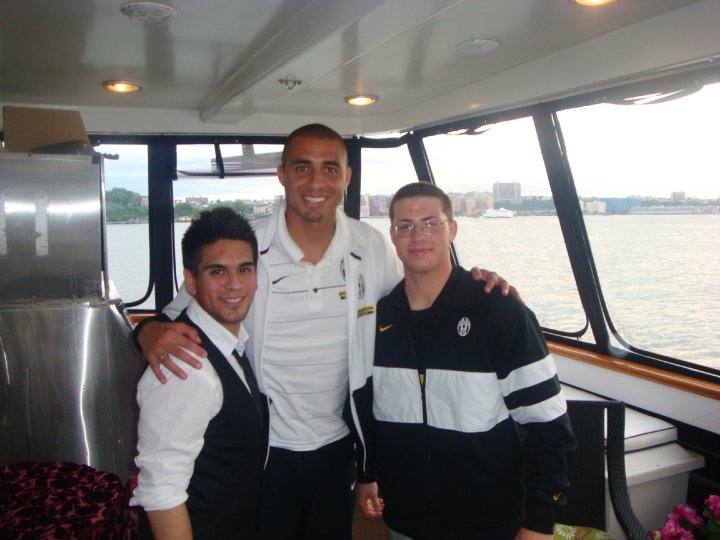 Piero on the left, Tyler on the right. Del Piero Iaquinta in the middle.

I had the blessing of being the ONLY Juventus Memeber to win the contest to have dinner with the team on a boat over the Hudson River in NY; I brought a friend Tyler as my guest. I have a few things that I wanted to say in reply to all that has been mentioned on this post.

The first would be that I still cannot believe I was literally the only one chosen for the dinner in NY, while the gala in Toronto was much, much less exclusive. In that regard, I thank God once again for having given me that opportunity, but at the same time I feel terribly sorry that those who were present at the Gala in Canada had such a horrendous experience with the team. 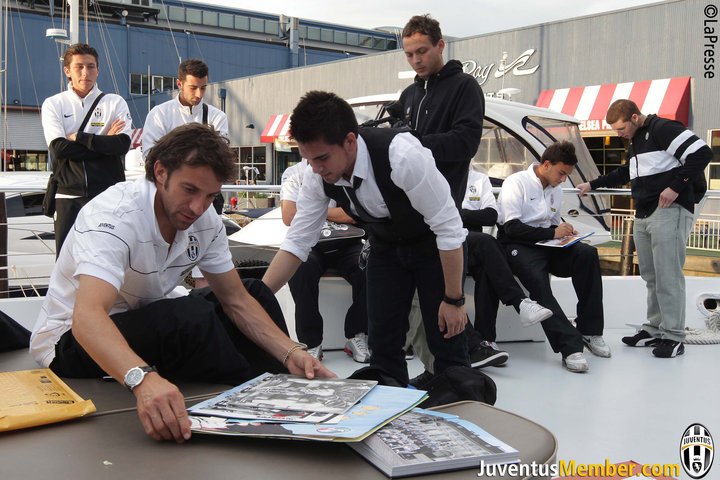 Having spent one on one time with Del Piero throughout the evening, for about 3 hours or so, I can say that his "rock star" attitude is mistakenly perceived. He is extremely shy and humble. I'm not very close to any of you on the group, except now Tyler, but the fact is that to me Del Piero is EVERYTHING. He is the reason why I'm a Juve fan. Before knowing of Del Piero I didn't even like soccer at all, and there really are not enough words or space on this little facebook post box to express to you how much it meant to me to actually have the chance to meet him and talk to him. I must have told him in 100000 different ways how much he means to me, and every single time he thanked me geniunely with a smile, and kind words as he would say, "Don't thank me, thank Juve" I was nervous as shit when I first said hello to him, and he said "Relax, calm down, come have fun with us" We all hold him in the higest regard as our captain and absolute symbol of our Signora, but it honestly seems that Del Piero doesn't see himself as all that; he's extremely humble. I had dinner with him, take my word.

Of all the players, the only ones who had the whole "I'm a rockstar" attitude was fucking Diego, along with Zebina, ( I'm also fluent in French and so spoke to him in it; he couldn't believe that I spoke French, and overrall was just a douchebag) . As if I didn't dislike Diego enough, that evening was even more of a reason to fucking hate his brazilian bitchass. He walked around like he owned the place; I didn't even say hi to him. Fuck Diego. FUCK AMAURI, as well, though I doubt I need to say that; my sincere hope is that you have all disliked him from the beginning, as I have. I shook his hand and said, in Italian, "I hope you realize you're in the best club in the entire world; start playing like it" he just looked at me, and went ..."uhh, mmmhmm" Fucking tool... 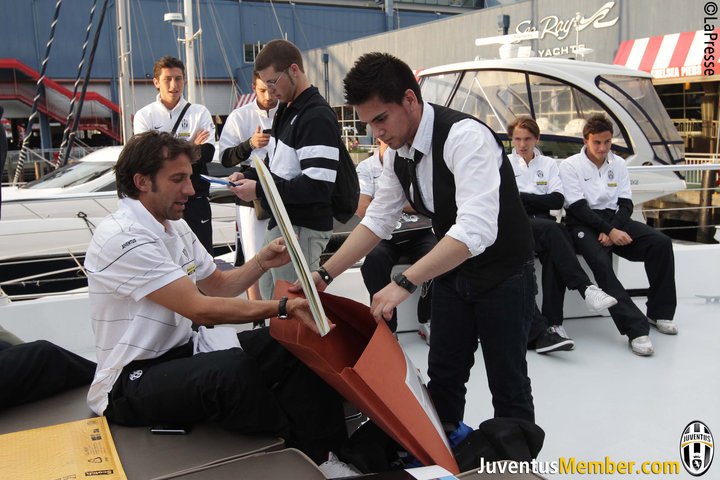 I'm going on a major tangent here... anyway, out of the whole group, Grosso was the nicest, most down down to earth, and most open and willing to spend time with Tyler and me. I loved the guy before, but after that night, he will forever be one of my favorite players. Trezeguet and Candreva also spent a lot of time talking to us. Trezeguet is rather reserved, but once you get him to start talking, the guy is great. Manninger likes to hang out on his own a lot. Grygera looked confused the whole night. De Ceglie is also really nice. Brazzo is really chill, too.

I would attribute their attitude at the Canada gala to a few things. They were quite exhausted, even in New York; you could tell they kinda wanted for the whole thing to be over so they could go back to Italy. Del Piero seemed quite sadened at times, as if he were thinking to himself, "wtf am I doing on a yatch watching the Statue of Liberty when we just fucking had the worst possible season", in addition to that, he must also be quite destroyed not having gotten the call for the World Cup. The other factor, and I believe it to be the most important one, is that United States "fans" are extremely obnoxious. 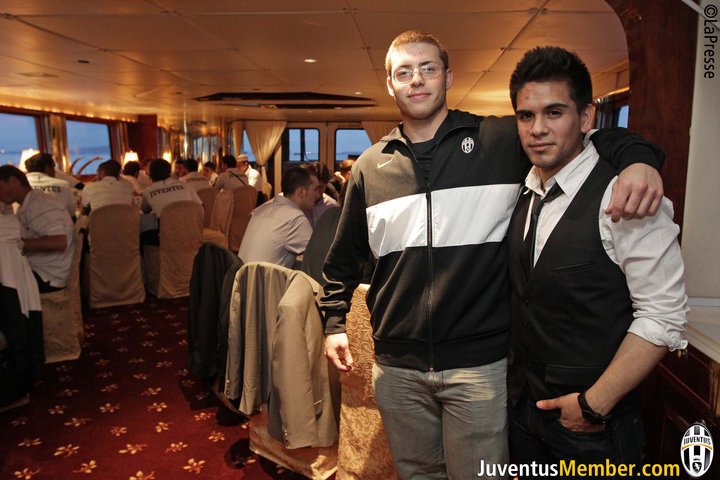 With all the players in the background...

During the NY game, I was sitting next to the Juve bench, third row. Throughout the game people were pushing around, yelling and screaming at the players to get shit signed, without a single hint of class or respect. Del Piero was subbed off around the 60th minute, if I'm not mistaken; once he sat on the bench, I had a crowd of about 30 people, not exaggerating, running from their seats to where Tyler and I were seated to scream at Del Piero. It was unbelieavably annoying. He was pissed off, not so much at the fans, but at how the game was going, so he sat there looking like he was gonna snap at any second, drinking water. As the game ended, even more fucking people came down to where I was, and they started insulting Del Piero because he wouldn't look at them. He was gonna go sign shit for them at the end of the game anyway, why the fuck couldn't they wait? Ale could have yelled back at them, but like the gentleman that he is, he simply got up and gave all the fucking US idiots what they wanted, and even then he was still getting screamed at with insults flying here and there. 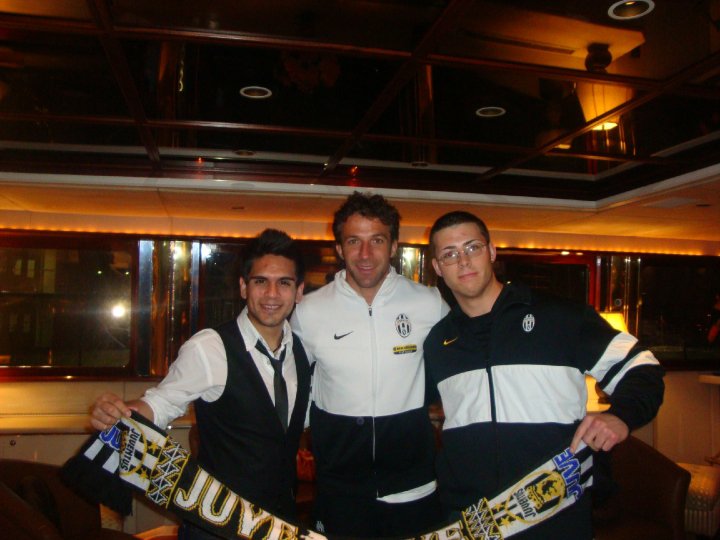 One last thing, the organization for the whole tour was poor. I know from Tyler that the team practice day and time was moved at least twice, I believe. For the yatch dinner, I was first supposed to meet up with the team at the pier at 8pm, then received a call from them to meet at 6:30pm.... they showed up at 7pm, and only the marketing staff knew that I was going to be there; the players had no idea that there was even a contest for juventusmembers. I had to explain to the players the story of how and why I was there with them.

Nevertheless, in all honesty, none of the negative aspects of this experience can come close in comparison to the amazing and truly incredible time that I had drinking wine, enjoying a succulent meal, and chatting with the players from the club that I love and live for with all my heart. It was truly an evening that I will never forget and that I will treasure for as long as I live. Undoubtedly, I'd like to express to my fellow juventini who were at the events in Toronto my deepest sorrow, as I know how painful it must have been to be have experienced such a heart-breaking weekend. 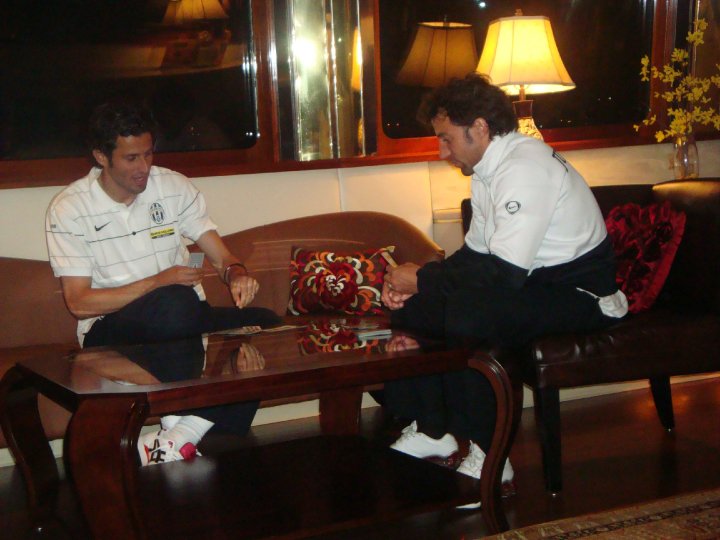 If you're not seething in jealousy enough yet, the two also saw the players at their hotel (taking photos with most of the players...and Zaccheroni) as well as at training. Tyler, who went with Piero managed to get Grosso to sign his Italy jersey...and then Grosso gave him his shirt from the Red Bull match. I think I speak for all Juve Offside readers when I say "lucky bastards" and feel increasingly insignificant. Congrats to Piero and Tyler on quite possibly what was the best weekend of their lives. 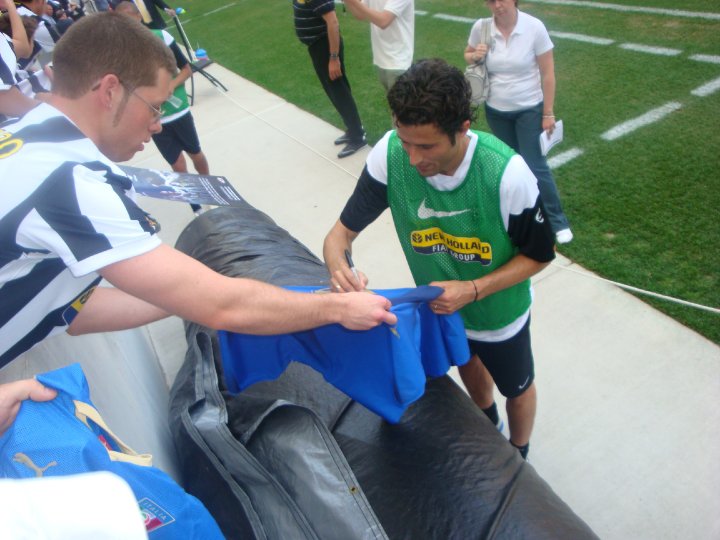 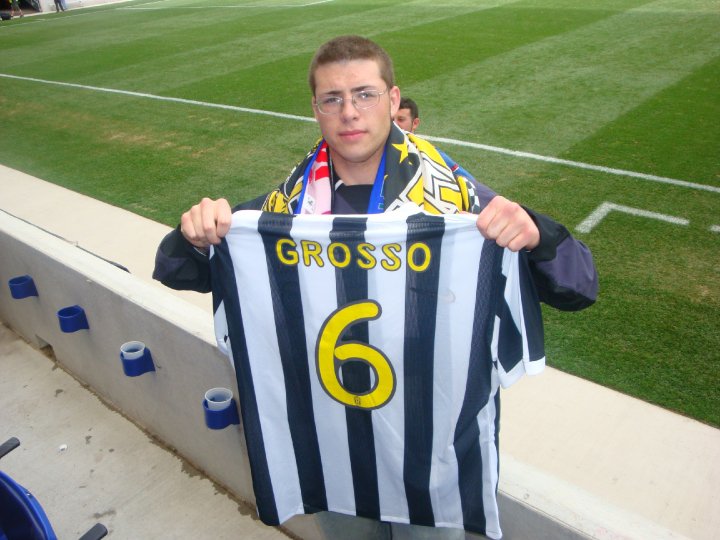 (Piero's sending me a few more photos, so this post'll be updated a bit later)