Share All sharing options for: Remembering Heysel- 25 Years On

Today is the 25th anniversary of what is called "the darkest day in Uefa competitions," the Heysel Disaster. For any unfamiliar with it, during the European Cup final in Brussels, Liverpool fans knocked down a retaining wall of the Heysel Stadium, killing 39 people, 32 of them being Italian Juventus fans. I remember the 20th anniversary well, we were coincidentally paired with Liverpool in the Champion's League that year, ironically. 5 years later, our paths have fallen in a similar fashion as fallen giants of our league. 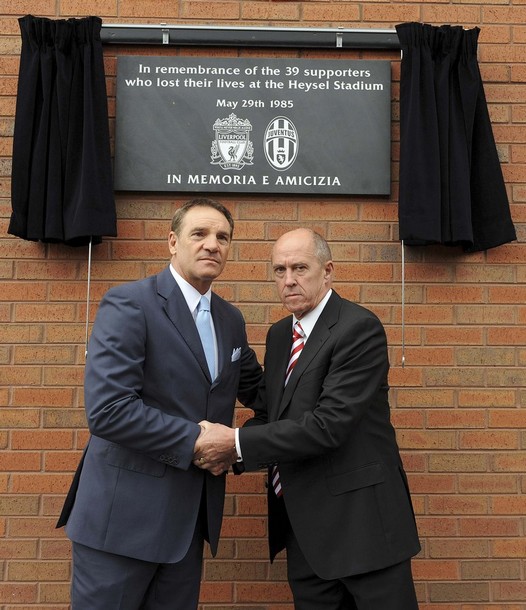 29th May 1985: the tragedy
Brussels, 29th May 1985. It was meant to be a fantastic match, one which should have found its place in the history of football. A few months before, Juventus had hosted Liverpool in Turin for the Super Cup final. On a frosty night, the bianconeri had won 2-0 and it had been an extraordinary moment of sport and loyalty with the Juve players who received the trophy wearing the Liverpool shirts. In Belgium, the match was the final of the Champions Cup. A spectacular match was expected and instead it turned out to be a horror spectacle which totally cancelled the joy of the European champions title. Before kick-off, in a stadium which had quite a few problems from a structural point of view, the English hooligans assaulted the peaceful Juventus supporters situated in zone Z. It was a tragedy with 39 victims and 600 injured. Scenes of absolute madness never seen before were witnessed with the stadium becoming a stage for a war declared against peaceful people whose only intention was to be present for a good night with family and friends.

UEFA decided that the match should be played in order to avoid the situation getting worse. The news perceived were unclear. Rumours had it that there was one victim and others injured while the teams were forced to enter the field and so they did to honour the commitment. Juventus won 1-0 but this counted very little: those watching the match on TV knew excatly what happened and the proportions of the tragedy.

Here are the memories of Michel Platini as written in his autobiography “My life like a football match”: «At the Heysel stadium the X,Y and Z have a nickname: they are called the cattle sties because they are the less expensive places and the supporters are crowded and standing. Cattle sties...At 19:30hrs, 45 minutes before the scheduled kick-off, the carnage began. In the cushioned stand the explosion of violence equals the organizers’ latentness. The Liverpool supporters threw themselves on the barrier that sepearted the Y and Z stands. They overturned it and the first fights began on the side of our supporters. The reds attacked the bianconeri...The panic was so great that the run towards the lower part turned into a catastrophe. What followed was nothing less than drammatic and tragic. With its procession of innocent victim and the faces of those martyrs, the Heysel stadium will remain in the memories of many as a symbol: one of football, a sport full of nobility and dignity which a handfull of vandals drunk with beer and violence, attracted more by a war between supporters rather than a fair match between two teams, did not hesitate to profane with their actions and the blood shed».

Those who died at Heysel have a special place in our hearts, as passionate fans of Juventus, we should never forget them. But it goes beyond that, they should hold a special place in everyone's hearts. Heysel was the moment that European football stood at the brink, looked disaster in the face, and moved in the right direction. We can argue about the money influence in UEFA, or "Financial Fair Play" but there's no doubt that UEFA is the standard of club competition...as well as safety and stadia regulation.

Never again to such madness
The Heysel stadium represents a real break-water within the politics of stadium safety and security. It is not that all the problems have been resolved, as can be seen from the many episodes which followed, but what is sure is that the tragedy in Belgium had forced UEFA and the English government to corrector their ways, after having for years watched passively the emergence and consolidation of the hooligan phenomenon. The teams of the English federation were suspended and they could not participate in any European competitions for five years. Liverpool were suspended for an extra three years which was later reduced to one after another terrible incident: on the 15th of April 1989, at the Hillsborough stadium, 96 persons died trampled by their own friends. Once again the insufficiencies of a stadium were the cause of exagerated crowding which did not allow the supporters any way of escape.

During the 1990 World Cup, Italy and England played the third and fourth place final in Bari. The players and the supporters on the stands celebrated the match with great fair-play, uniting in a collective embrace in an attempt to cancel the previous tensions, which in Turin, the location of some of the matches of the English team, showed signs of danger.

Since the year 2000, inside the Heysel stadium there is a commemorative plaque which reminds everyone of the tragedy and during the European Championships held in Belgium, before the match between the hosts and Italy, Juventus and Italy player Antonio Conte, placed a bouquet in the Z zone in memory of the tragedy. All the other players of the Italian national team entered the field carrying a flower in their left hand. In the same days, the youth teams of Juventus and Liverpool played a match at the Stadio Comunale in Arezzo (the hometown of two of the victims).

On the 29th of May 2005, at the new heysel stadium renamed King Baldovino, a sundial with a stone with the colours of the Italian and Belgian flags was presented.

During the 2004-2005 Champions League, 20 years after, Juventus and Liverpool met again for the first time in the quarter-finals. The two clubs committed themselves to rebuild a friendly relationship through a series of initiatives that saw the particpation of players of those years in the front seat.

25 years have passed since those Juventini departed us, and despite the fact that I was not alive then, have never been to Heysel (or Belgium) nor did I know those who passed, today, we remember. 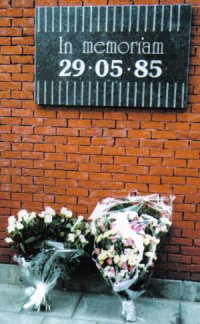