Share All sharing options for: The Juventus 2009-2010 Mercato Report Card

It's not good, obviously. There were a lot of reasons behind our godawful season.....injuries, poor coaching, Zebina, but a poor mercato is definitely one of them. And it comes as a surprise to many, who thought that Juventus had conducted a brilliant transfer campaign. One note before I jump right into the ratings- I am rating the players on their performances, their price tag included. However, though I maintained that our team was poorly assembled, I won't fault Melo additionally for not being a regista. In my opinion, it came through anyways in his poor performances. 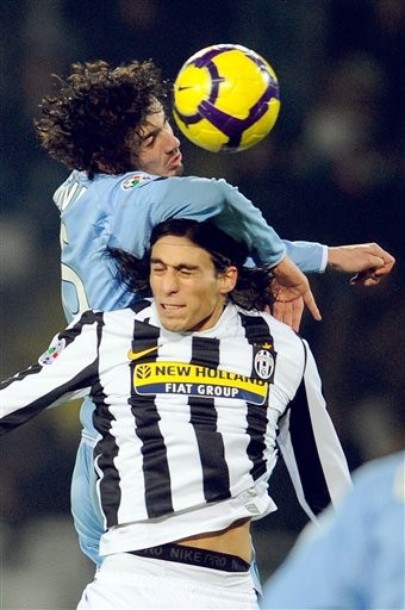 MARTIN CACERES- B : The young Uruguayan was an outcast at Barcelona, in the victorious Champion's League final, Yaya Toure was preferred at CB to Martin. Though he mostly played as a center-back in Spain, he has generally played at right-back in Italy. Like Domenico Criscito, he seems physically much more suited to play as a terzino. You can read my thoughts a bit more fully here from a few weeks ago, but essentially, he's very promising if a bit raw, but fights with grinta and the Juventus spirit. One to keep, fortunately Barcelona has no interest in keeping him. (Over the last few weeks, I've realized Barca spends just as badly as Real. Laporta is a hypocrite) 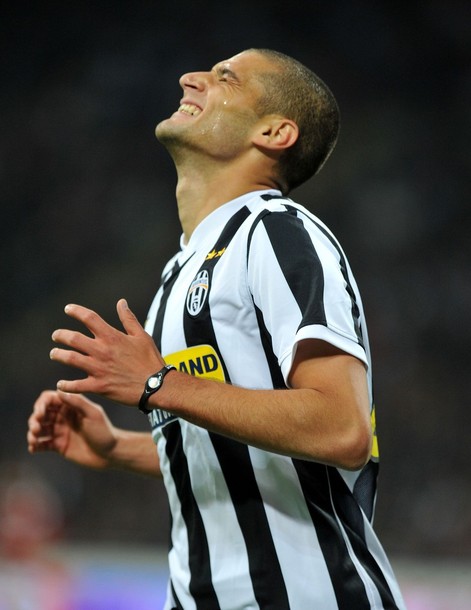 ANTONIO CANDREVA- B- : Drafted in as an emergency creative talent in January, Candreva had a lot of demands for his performances. He's performed decently enough, and though I was not terribly impressed, if we can negotiate his price down, I like his future. 12 months ago he had just won Serie B. The question though, can he fit into a 4-4-2? He fits perfectly into the 4-3-1-2 as a trequartista or midfielder, but he doesn't really seem to be a naturally central midfielder or winger. 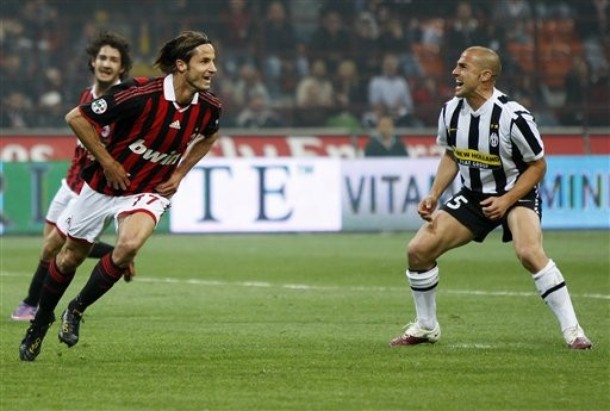 FABIO CANNAVARO- C+ : Nevermind the emotional baggage he brought with him, Fabio was the wrong choice from Day 1. As I said when we signed him on free-

Don’t you guys see what’s going on here? We signed Fabio the same reason we signed Knezevic on loan and Milan signed Senderos on loan. The management is too stupid to actually invest in defense. That’s why we’ve signed Mellberg, Salihamidzic, and Grygera on bosmans, and De Ceglie and Molinaro for cheap. They’d rather snap up Diego and make us forget that our defense is woefully inadequate for a long campaign. Cannavaro is 35. Legrottaglie (who played in Serie B, mind you) is in good form, but he’s not getting younger. Brazzo and Mellberg have 1-2 good years left in them. 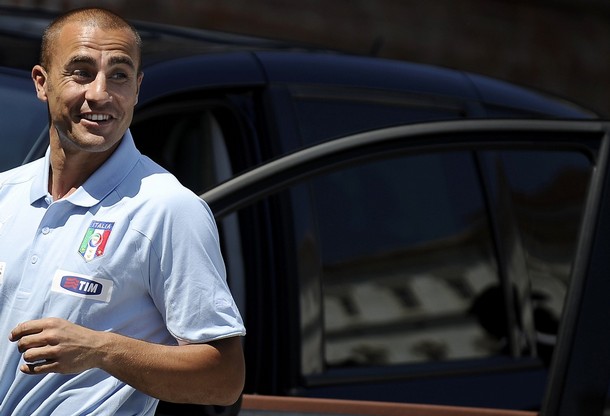 "Can you believe those Juventus manager morons actually fell for offering me a contract?"

He looked over-the-hill at Real Madrid, and despite a positive blip in form at the start of the season, he looked over-the-hill at Juventus as well. Too slow, he's lost a bit of his positional sense, and for most of the campaign Nicola Legrottaglie was better than him. Indeed, for a while Canna became 2nd-choice behind Legro but with the 2010 World Cup coming soon, I'm sure "pressure" was put to let him play. Fabio came to Juventus solely to play a bit before the World Cup, and he played like shit for 6 months, capping it at both ends with solid performances.

And that's another reason to hate him. I'm not too worried about him this summer in South Africa, this season showed when he actually was motivated, he could still play well, which was playing well at the beginning and end. He loves the Azzurri, so he'll be plenty motivated in South Africa. Too bad he used us for the last year, and took a proverbial dump on our team. Ciao, Fabio. Don't let the door hit you on the way out. 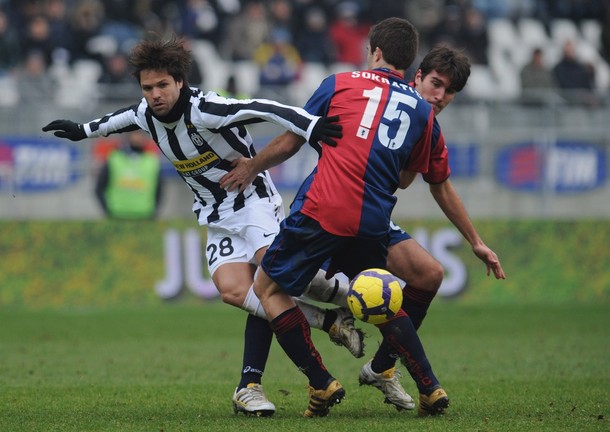 Most fouled player in Serie A this year...also more fouled than Messi in the CL despite going out in December.

DIEGO- B : I won't go much into it, because I did three or four days ago. Suffice it to say, he does not deserve to be the "Serie A Flop of the Season." Many expected him to waltz into a shit team in a new league, and score Kaka-style goals. He didn't. That said, he had a hand in nearly 50% of all Juve goals this season, and that counts the goals scored in games he didn't play in. Not a stunning performance, but it should be considered acceptable for his first season in Serie A. 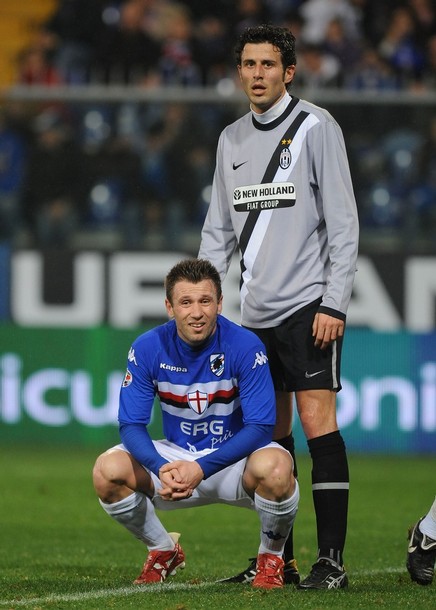 FABIO GROSSO- D- : He hasn't been quite as awful as Knezevic, so he just barely avoids an F. I was lukewarm on the Diego, Caceres, and Candreva signings, and outright opposed to signing Melo or Cannavaro, but I was quite wrong on Grosso. I thought we'd finally signed a solid left-back who was productive at both ends of the pitch, misgivings about his club form be damned. Completely wrong. Grosso attacked too much with too little output, leaving massive gaps at the back and generally being skinned by average strikers like Tiribocchi. Deservedly cut from the Nazionale this summer. We've got his contract for 2 more years...I wouldn't mind letting him go for free. If he's down to be a reserve, I'm okay with that too, but he cannot be first choice next year. 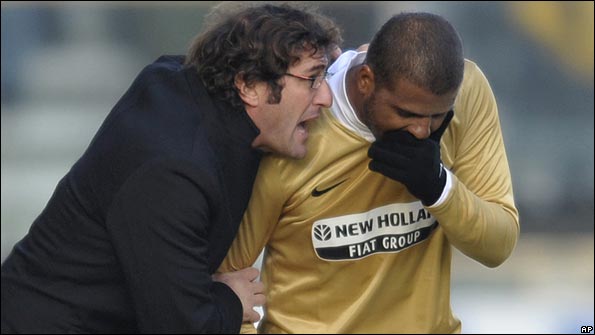 "May I recommend against giving the 'ole vaffanculo to the fans"

FELIPE MELO- C- : Melo, like Cannavaro, was the wrong choice from day one, but for different reasons. Whereas Cannavaro betrayed us and was too old, Melo was at the peak of the career and looking to win some silverware. But despite complaints that Melo is no playmaker, we tried to play him there simultaneously as an anchor. He failed as a playmaker, but he failed as a mediano as well. When I think of Melo's season, the first thing that comes to mind is the Bayern game. Not him insulting the tifosi against Siena, telling them "vaffanculo" and "state zitti" which pretty much burned all bridges for him, but the Bayern game.

In that game, he utterly failed in his chief role as a mediano. A defensive midfielder is supposed to break up play, and even more importantly, shield the defense. Schweinsteiger and Van Bommel were left absolute free reign to bomb Buffon's goal with long-range shots outside of the 18, and the defense was left completely screwed time and time again. I have no doubt he'll play well at the World Cup this summer alla Brazilian syndrome, and hopefully that'll pique interest from Arsenal and such this summer. I didn't like him from the start, a few decent performances were encouraging, and then the season went to shit for him and he capped it off with something I have NEVER seen in all my time as a Juventus fan. Absolutely shameful. 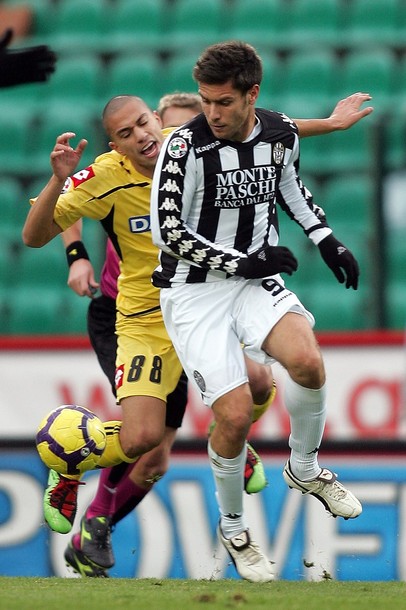 Image of Paolucci wearing a Juventus jersey not found. Unsure if one exists.

MICHELE PAOLUCCI- s.v. : I feel bad as hell for this kid, even worse than Giovinco who has been criminally ignored the last two years. Paolucci was starting to get on with his career, with a decent campaign at Catania last year and a move to Siena secured this summer. He started out relatively poorly in the early fall, but as the Serie A season moved on he started getting more and more minutes. Then January happened. With Trezeguet out for 6 weeks, Iaquinta still in doubt, Amauri had a minor injury that kept him out for a few weeks. Secco and Blanc, showing their complete incompetence, ran out and signed Paolucci, who grew up in the Juve youth academy.

Surely, the prospect of playing for the team he loved as a child appealed to him, but he was second choice. Davide Lanzafame, in the same boat as Paolucci (co-owned, Juve Primavera grad) refused the transfer because he wanted to play more often. Smart man. Paolucci got a game or two during January, and then was forgotten. This transfer should go down in the dictionary under the title "dick move." Hopefully Paolucci leaves this summer and gets his career back on track.

IAGO FALQUE SILVA- s.v. : Signed for a small amount from Barcelona, he looks quite promising. A loan move to Bari didn't work out well, but he's still very young and did excellent as the Primavera romped to their back-to-back Viareggio title. One for the future.