The Long Awaited Debate: Who should be our coach next season?

Share All sharing options for: The Long Awaited Debate: Who should be our coach next season?

This question has been suggested several times in the last few weeks....and I apologize for holding out, but I did want to wait till a bit closer to the end of the season to ask it......who should be our coach next season? We're at a turning point in our history, a new great manager could bring us back to the top of Serie A, whereas a shit one could doom us to midtable mediocrity for years. For me, this is undoubtedly the biggest question of the summer, bigger of a question than if Marotta will sign (at least for the near-term future) or any players that we might go out and grab. I give to you my personal views on the coaches, then there are two pools, and finally, as always in the comments section I'm interested to hear your views. 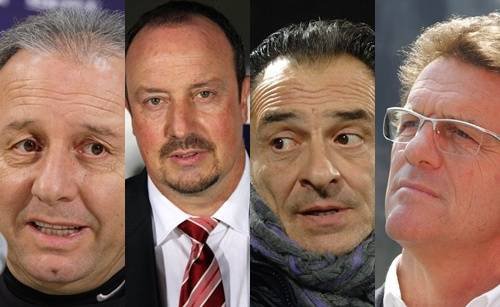 Not even going to bother considering Zaccheroni staying. Failing to reach 4th is not really his fault...but he hasn't given us ANY reason to keep him on.

Massimiliano Allegri: Definite possibility.
PROS- He's young, ambitious, tactically savvy, and does well to bring out the best in players. Matri, Acquafresca, Jeda, Biondini, Ariaudo, Marchetti, all have taken a step forward in their careers under him. As he was sacked by Cagliari, he could easily join Juventus with no messy negotiations. Personally, I see a lot of 1992-1994 Marcello Lippi in him.
CONS- Lack of experience is the most obvious, as he's only been coaching in Serie A for a bit over a year and a half. Started his Serie A career with 5 straight defeats, Cellino readied the ax, but he turned it around and finished an impressive 9th last season. Cagliari did very poorly in 2010, picking up 2 points from 10 games. It could be due to his inexperience, or it could be due to him already planning on joining a bigger club this summer, the reason he was fired. Milan is rumored to be interested.
PREFERRED FORMATION- Moderate preference for the 4-3-1-2.

Rafa Benitez: Unlikely
PROS- We've been over this quite a bit, so I won't go too far in-depth, but he's an excellent tactician who instills defensive solidarity in his teams. Proven experience both in league and cup play, at the highest level with Liverpool and Valencia.
CONS- As I said here, I am quite opposed to Benitez. His chief failing, in my opinion, is a failure to coax the best out of players, or in general, shift transfers and young players into the first team. With the Old Guard retiring soon, we're going to need to replace them. We also have a bright crop of young talent, and in my opinion he's not the man to build a team that way. Sometimes overly defensively-minded and plays for draws.

Fabio Capello: Unlikely
PROS- One of the most experienced coaches in the world, who has won pretty much everywhere he's gone. Won league and CL titles, an excellent disciplinarian who instills defensive solidarity into his teams, he may be criticized for catenaccio but he wins.
CONS- Like Hiddink, I think at his age he's done with managing club teams, which I have a suspicion is Lippi's feelings as well. Seems like he wants to stay with England. He has a mixed record with young players, and of course there's the baggage of him leaving after Calciopoli, although that's less of a problem for me then most of the players leaving. Weaker record in recent years in cup competitions.
PREFERRED FORMATION- Strong liking of the 4-4-2. 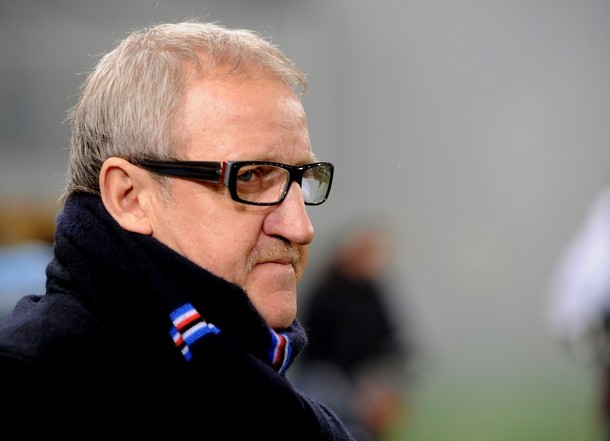 This dude always has some serious specs.

Gigi Del Neri: Definite possibility.
PROS- Has taken Samp on a fantastic run this season, whether they finish in the Champion's League or not. Kept Atalanta in Serie A and in some years, pushing for a Uefa Cup spot whereas they are relegated the year after his departure. A solid tactician, who's teams play compact and united. I thought he had problems with getting his teams out of trouble, but he did fantastic with Samp this January, tactically rearranging the team to get out of a 4-game slump. (Dropping Cassano to play more physically, with Pozzi up top) Experienced Serie A coach, though little experience at the highest level. Looks exactly like one of my best friends fathers in 15 years. (Who is Scottish)
CONS- As I said, he sometimes seems a bit too rigid and thus unable to get his teams out of sticky situations, but he did well at Samp. Failed to save Chievo in 06-07, and failed during his brief tenure at Roma, though the capital club was in extreme turmoil at the time so little can be blamed on him. Speaks with a heavy accent, and I, like Cassano, have a hard time understanding his Friulian tone. Big question for Del Neri is, if Samp makes the CL, will he leave for Juventus?
PREFERRED FORMATION- Strong liking of the 4-4-2. 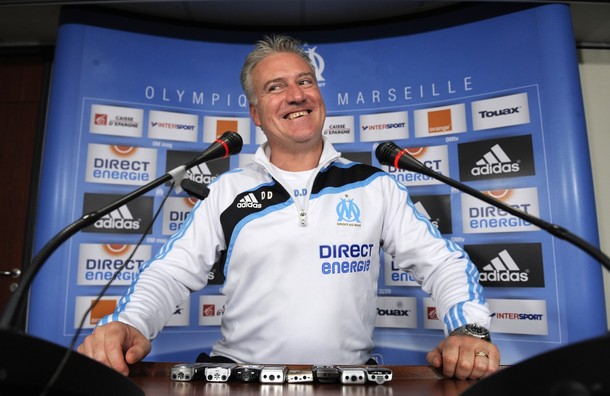 Didier Deschamps: Unlikely.
PROS- Knows Juventus as a player and a coach. Flexible with formations. Young, ambitious, with proven success both at the league level and cup at the highest levels. Took Monaco to the CL final, and just ended Marseille's 18-year trophy drought by winning Ligue 1 and the Coupe de la Ligue. Tactically savvy, good at man management, to me, he's one of the best young coaches in the world.
CONS- Big "if" to see if the management would take him back...or if Marseille would let him leave. Otherwise, there aren't any real cons that I can think of.
PREFERRED FORMATION- Slight preference of the 4-3-3 over 4-4-2, though it could be that he thinks French teams are more apt to it. Tactically flexible. 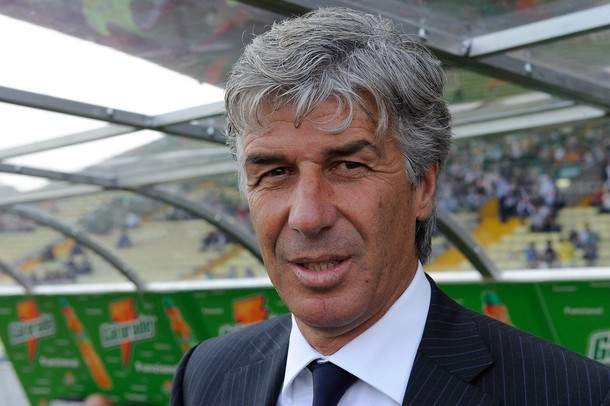 Gian Piero Gasperini: Definite possibility.
PROS- Plenty of Juventus history, as he grew up in the Juve youth team and later coached it. Excellent at developing young players and bringing out the best of older ones- Marco Rossi, Sculli, Thiago Motta, Bocchetti, Criscito, Palladino, Mesto, Papastathopoulos, Moretti, all have done well under his coaching. Attacking-minded.
CONS- As he is attacking-minded (Reflected in his formation) his team tends to be defensively unsound, and that is reflected by the fact that Genoa has the 2nd-worst defense in the league right now. Has difficulty getting a consistent run of positive results.
PREFERRED FORMATION- 3-4-3, with plenty of wing play from the midfield and forwards. Top 3 tends to be two winger-forwards flanking a forward. 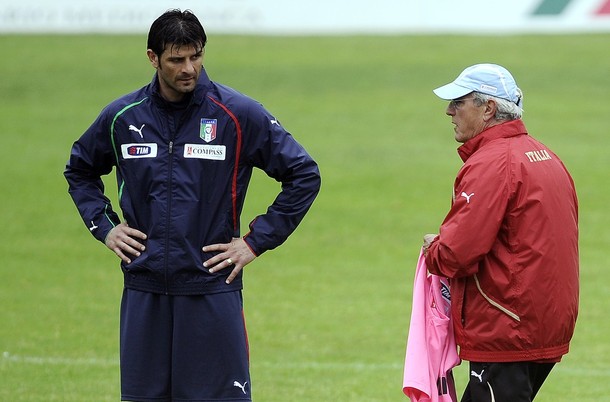 Marcello Lippi: Unlikely.
PROS- There are few men in the world that know winning, or Juventus more than Marcello Lippi. Phenomenal coach who has won the Scudetto every year with Juve except the two years of his departure. Fantastic league experience as well as cup experience, given his strong CL runs and of course, the 2006 World Cup. Great at creating cohesive teams and team unity. Does well to get the best out of players, and is no tactical slouch although that takes a backseat to his cohesiveness.
CONS- I, like many others, share some concern in his recent call-ups. Suggested Juve sign Grosso, Cannavaro, and Ferrara and that clearly has not worked out well. Might not want to return to club management.
PREFERRED FORMATION- Tactically flexible, though I'd say he prefers the 4-3-1-2. Played it most of his time at Juventus, though he also played 4-4-2 on occasion and formations like 4-3-3, 4-4-2, and 4-3-1-2 at the 2006 World Cup. 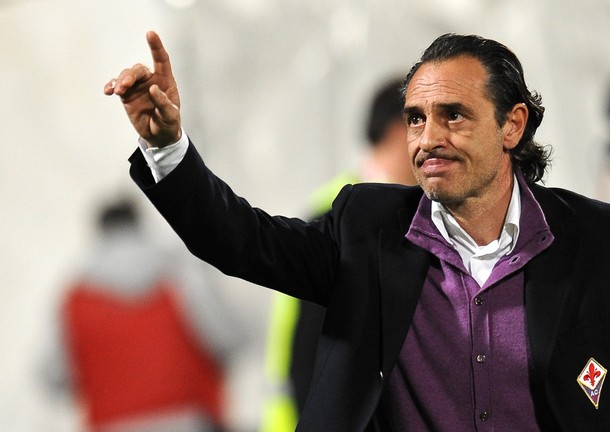 This man is always impeccably dressed.

Cesare Prandelli: Moderate Possibility
PROS- The Wenger of Italy, in that he has a tremendous track record at Verona, Parma and Fiorentina in developing young players or rejuvenating old careers. Launched Adriano, Gilardino, Mutu, Frey, Marchionni, Bonera, Paolo Cannavaro, Bresciano, Ferrari, Jovetic, Melo, Gamberini, etc...clearly a specialist in man-management. Great experience in Serie A, consistently bringing his teams to the top of their potential, and has moderate experience in Europe, a strong Uefa Cup and CL run in the last few years. Has a Juventus history, as he played for the team during much of the 1980s.
CONS- He's a Viola coach, so it'd be hard to pry him away and I think he has plenty of affection for the team. Has a relatively poor record against the big teams in Serie A.
PREFERRED FORMATION- Tactically flexible, though in recent years has shown a clear preference for the 4-2-3-1. 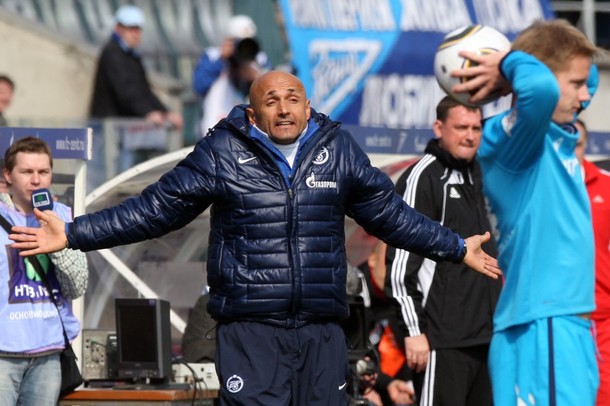 You can take the man out of Italy.....but you can't take the Italian out of the man

Luciano Spalletti: Unlikely
PROS- Tactically savvy, very experienced in Serie A and the Champion's League as well. Definitely overachieved with Roma, now in Russia coaching Zenit St Petersburg and doing very well there.
CONS- Teams are defensively and psychologically fragile, and when things go poorly he doesn't seem to know what to do. Definitely more of a tactician than a man manager.
PREFERRED FORMATION- 4-2-3-1.

Who do you want to be the new Juventus coach?online survey

Who do you think will be the new Juventus coach?online surveys