The Ennesima Sconfitta, but the Future looks Bright

Share All sharing options for: The Ennesima Sconfitta, but the Future looks Bright

We lost. Again. It's becoming a habit, and as Roberto noted, we have officially posted the most amount of losses in a season. Should we concede 3 goals against Milan, we will have conceded the most amount of goals of all time...2 goals will tie the record. I almost want us to get hit bad, maybe it'll get the changes going that are necessary. It already has, Andrea Agnelli and Bettega wouldn't have come back if this season wasn't so miserable. Maybe that last one will get Marotta to sign on the dotted line. 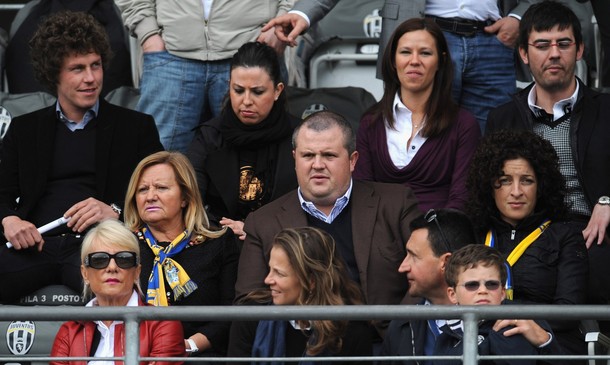 Guess which person here is the Prosciutto King? (Parma's President)

Speaking of management changes, the future does indeed look bright. Today, the CdA met in Torino (Board of Directors) and discussed various important issues. The first, was that they have officially appealed the decision to award the 2006 Scudetto to Inter:

“During today's session, Juventus Board of Directors has decided to send to Coni and Figc Presidents (Italian Football Federation), to the Federal Prosecutor's Office and the Chief Federal Prosecutor a complaint which prompt to withdraw the decision to award the Scudetto of Season 2005-2006. Like John Elkann had anticipated last April 29th, Juventus asks for equal treatment. The decision to submit the complaint makes explicit reference to the news emerged in criminal proceedings pending before the Court of Naples, revealing the existence of a "dense network of contacts” between representatives of the company benefiting from the assignment of Scudetto 2005 -2006 and members of the refereeing.

This decision was taken considering the new revelations from the Naples Tribunal, which exposed a wide net of connections between referees and the team which benefited from the title. These contacts, according to the criteria used by the Procura Federale against Juventus, breach the principles of honesty and fairness expressed in the article 1 of the Code of Sport Justice. Indeed, Juventus FC believes that Extraordinary Committee of the Federation failed to consider it back in 2006. This is to say that the club awarded the title in the season 2005-06 was also guilty of having 'unclear relations' with the officials.”

Bout goddamn time. It should be reassigned back to Juve, but that would be too much to ask of the FIGC, to admit they were completely wrong. Over the last few months, Juventus have made more efforts to defend our name and honor than we did in the last 4 years. It's no coincidence that this time has seen the return of Andrea Agnelli and Roberto Bettega at the club.

Speaking of the management, it is rumored that two other major decisions were made at the board meeting, though for obvious reasons, they have not been officially published. First, Rafa Benitez is off the table. This isn't very surprising, as it was rumored that Andrea Agnelli and Beppe Marotta don't particularly like him, and he was the preferred candidate of Blanc and Secco.

Second, it is rumored that the board has approved Giuseppe Marotta to come on board, as Director of Sport, aka Secco's job. Coming with him is Fabio Paratici as head of scouting, who has been Marotta's agent for some time. It was rumored that Garrone offered Paratici the job of Director of Sport at Samp, but he has instead chose to come to Juventus. That's a big coup, Paratici has done very well at Samp and our own scout, has done well scouting youth....like Carlos Garcia, Albin Ekdal, Immobile, and Yago, but has not properly scouted senior talent. Marotta and Paratici will be officially unveiled as the new transfer gurus after the last game, as Samp is still in contention for the Champion's League spot and no one wants to rock their boat at the time. It's not official yet....but yesterday, Marotta spoke to La Domenica Sportiva, the famous RAI sports show:

“No, I have not signed a contract with Juve. I will do everything with the utmost transparency, as I always do. I will talk to president Garrone, as it’s fair to do, about the best decision to take.”

To me, a fair translation is "No, I haven't signed a contract with Juve....but I will later. I gave Garrone my advance notice, as I wanted him to know he needed to get a new Director of Sport."

As I said weeks ago, no matter how crap Juventus is.....for Italians, Juve is Juve. And that's why Del Neri, when asked if he would take the Juventus job, responded, "Who wouldn't want to coach Juventus?" That's why, despite Sampdoria having one of their greatest seasons in recent years, while Juventus is having quite possibly our worst, half of their management is prepared to jump over to la Vecchia Signora. Onto the pagelle! 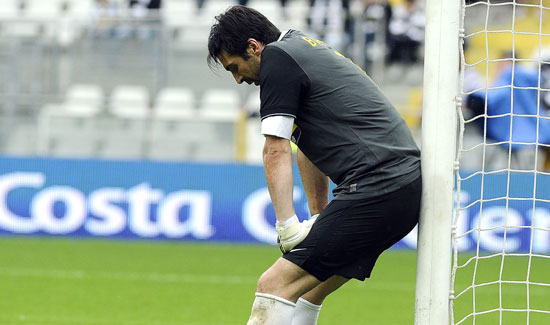 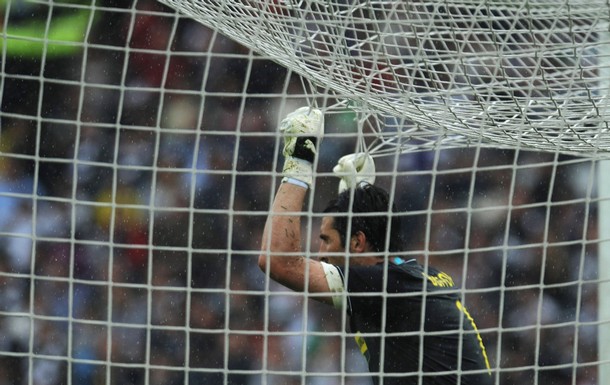 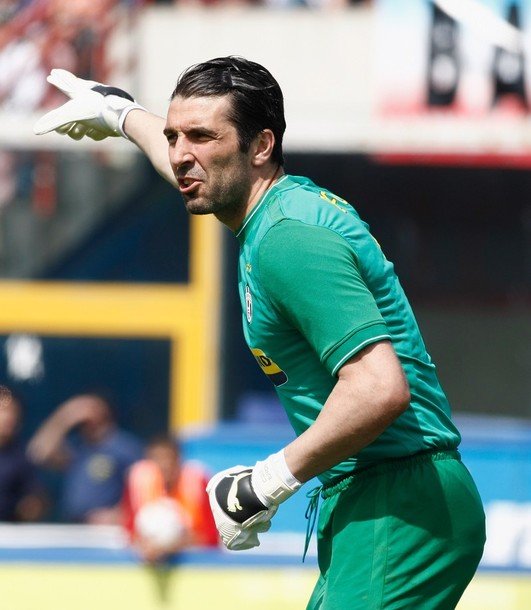 Is that the way to Manchester?

Buffon: 6- Again abandoned by his team for 2 of the goals, did what he could. At this point, I wouldn't fault him for leaving, he's already spent 4 trophyless seasons and he's not getting any younger. The long-term future of the club is bright...but who knows about the short-term one. If ManYoo approached him...I wouldn't begrudge him a departure. Sad.

Caceres: 5.5- Hadn't played in some time, and it showed, he looked rusty. That said, he still looks heads and shoulders ahead of his competition and will get better back in a bit of form.
Cannavaro: 5- Caught out of position on several times and played a relatively poor game given his stepped-up game the last few weeks. Completely roasted by Crespo for Lanzafame's 2nd goal.
Chiellini: 6.5- Relatively assured at the back, a solid outing. Unlikely for the deflected goal.
De Ceglie: 6- Did well to advance the ball on the wing and held his own defensively for most of the game. I still think he has a lot of promise at left-back. 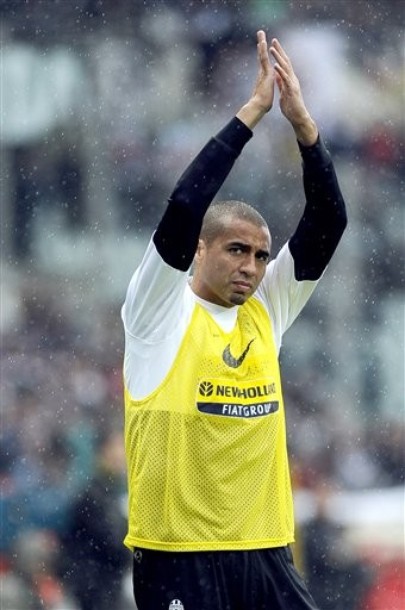 Is this the departure he deserves after 10 glorious years in Torino? Ridiculous.

Marchisio: 6.5- Plenty of quality and quantity. Nice assist for Iaquinta's goal.
Felipe Melo: 6- An improved display, had some great efforts on goal and could have received a 7, but loses a solid point for the 3rd goal. He simply stopped following his man, which a freaking mediano cannot do. Stood there and watched.
Poulsen: 5.5- Not as good as some of his last few weeks, but not a poor performance either.

Diego: 5- Had everything he needed to excel- solid forwards, young energetic fullbacks, and no Sissoko-Melo partnership in midfield, but he did not excel. A very poor game. 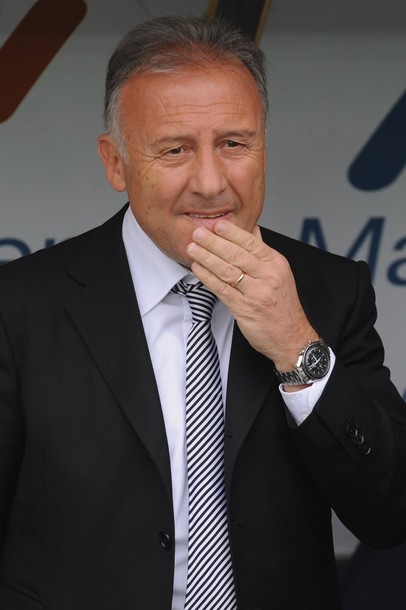 I wonder if Juve Stabia has any open positions...

Zaccheroni: 6- We play awful against Catania, and draw 1-1 there. We play decently enough at home against Parma, and lose awfully. Strange. I liked the fact that De Ceglie and Caceres got the starts over Grosso and Zebina, Zaccheroni has done a decent job with giving our young players a good chance to prove themselves. I was irritated that he didn't really give Camoranesi and Trezeguet a last hurrah...given both might be leaving this summer. Jackass.

There were a few more managerial tidbits from the Board of Directors meeting, though they aren't quite as entertaining as the idea of Marotta coming or Inter's paper Scudetto (at least the first one) being revoked. The best news, of course, is despite crashing out of the Champion's League, despite missing it out on the next year...we're still posting decent profits, this year we were positive for the first two quarters. It's declined since last Spring, yet shareholder value has increased, suggesting that the market believes Juve's future is indeed bright. And the profit, which of course can be spent, does not take into account the figures already approved for transfer market dealings. Unlike Roma, Inter, and Milan that have sizable debts, we're profitable even in our worst season ever, and will continue to be so.

Lastly, the FIAT/New Holland sponsorship of Juventus is coming to an end, after 3 years providing vital income during a tumultous period. We will miss the FIAT name on our shirt...and also the random sightings of tractors at the Stadio Olimpico or giving tractors to players as farewell gifts. 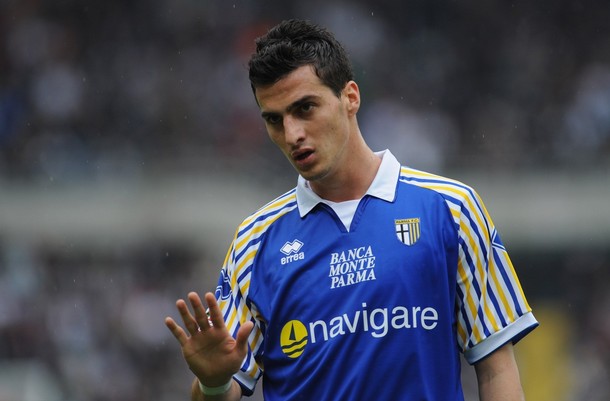 Lastly...Lanzafame gets his first brace in his career. It's funny...this kid is smart. Obviously, he has significant ties to the Juventus shirt, he didn't celebrate either goal, but when we tried to recall him this January, he refused. Not because he didn't love the shirt, he does, but because he knew he'd play a few games, then be benched for the rest of the season. At his age, that is throwing a wrench into the bicycle spoke of his development. And I don't think anyone can fault him for turning us down. And he has rejected us again, saying to the Parma official website that he would prefer to stay at Parma instead of going back to Juve this summer. (By the way, how many ex-Juventini is that who have scored against us this season? I remember well Almiron apologizing for scoring against us, and Palladino refusing to celebrate, although that was last March) 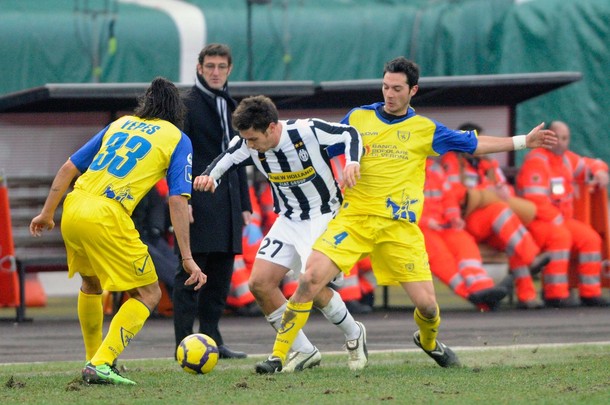 Look at Michele Paolucci, who I just feel tremendous sadness for. Is he Juventus quality, at age 24? His Serie A record says no, although during seasons he's actually gotten space, he's scored a solid enough amount of goals. At Catania, he scored 7 goals in 20 starts and at Ascoli, 6 in 19. Nevertheless, bringing back a still relatively young striker who needs playing time...and then playing him for a grand total of 150minutes or so in half a season is absolutely disgraceful. It shows incredibly poor man management by the administration, but also, incredibly poor market transfers. Did we need a striker in the January transfer window? Not really, Iaquinta and Trezeguet were supposed to come back in mid-January, and while that leaves us only with Del Piero and Amauri for at least a month, there were alternatives, ie- Giovinco and Immobile. Instead, we went out and got an eager young Bianconero, who was probably thrilled to come back to Torino and try and score a few goals, who knows, maybe earn himself a permanent transfer. Instead, we have delayed his development a solid year or so. Shameful.

Last thought- Italian TV is so weird...but American TV needs a bit more of "weirdness." Then again with Ben Roethlisberger and Tiger Woods as famous athletes...maybe it's better without. 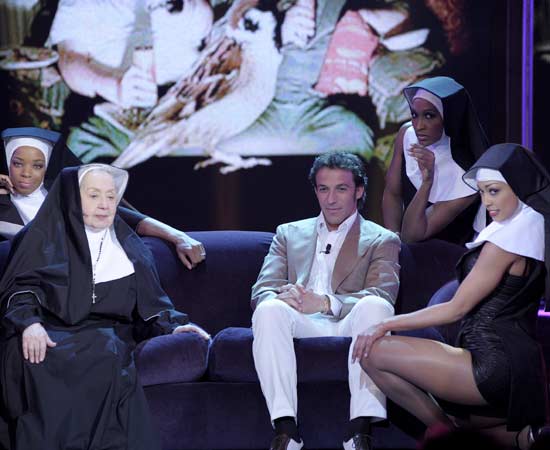 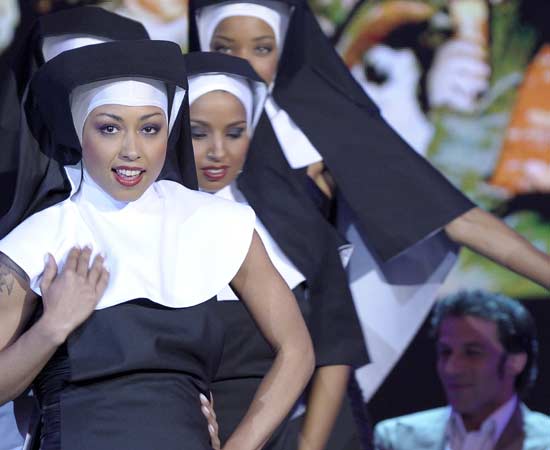 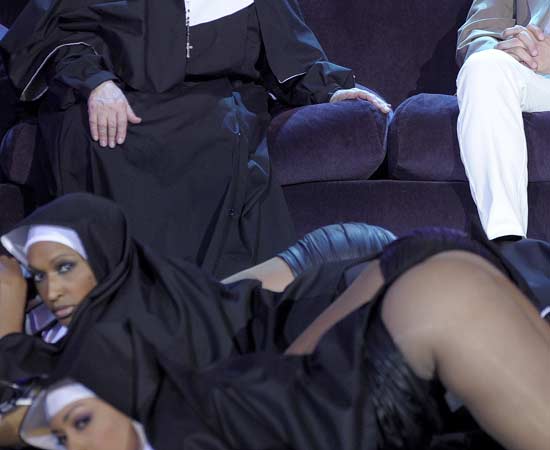 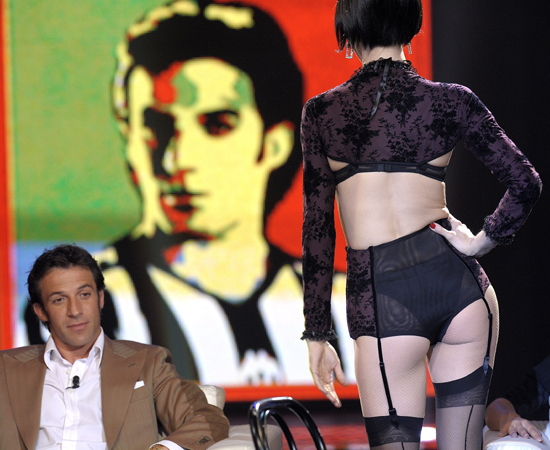 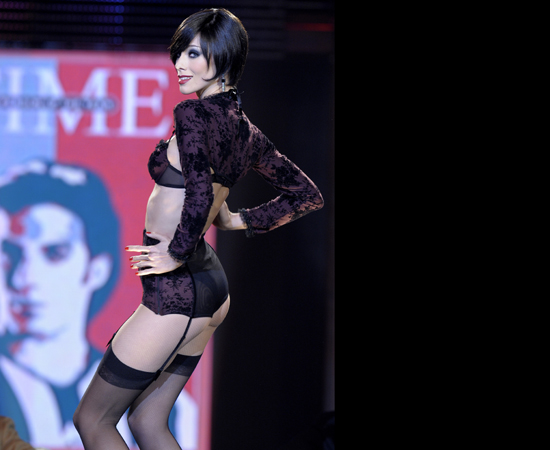 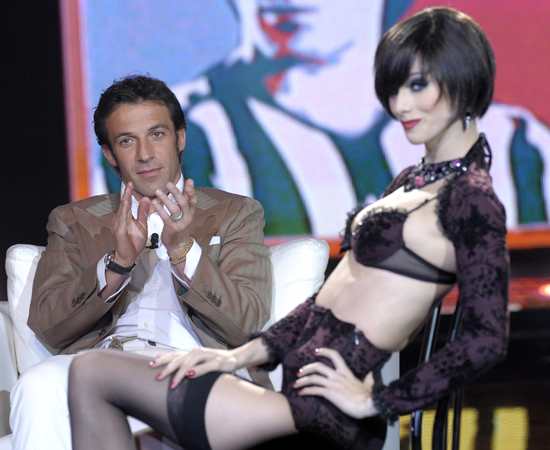