The Need for a Passer in Midfield, and Who Can Fill it?

Share All sharing options for: The Need for a Passer in Midfield, and Who Can Fill it?

I mentioned this a bit this summer, when talking about Gaetano D'Agostino, which is worth a read if you didn't catch it. But that boat has sailed, and despite the season being almost over, I want to analyze how we could solve this conundrum in the current term. It seems unlikely we will add a regista to the team, when our defense is so badly in need of an overhaul. (Remember Caceres and Candreva are both on loan still) So can we solve it? I think so, not ideally, but more functional.

Gaetano would add a dimension to our team that has been missing since our promotion back from Serie A, and that, quite simply, is a talented passer in midfield. Sissoko is certainly not, and Marchisio and Zanetti are decent passers but we have not had a maestro in midfield. Pre-Serie B oftentimes we didn’t need one, with our wingers still young and brilliant forwards (we still have them), the central-midfield could be largely ballwinners. With a likely switch to a 4-3-1-2 on the cards, we need someone in midfield who can get the ball up to the forwards and create spaces with his vision. We can’t rely on a trequartista always, ignoring Diego’s possibility of flopping or the inevitiability spell of poor form, if he is marked heavily in a game that would destroy our offense and we’d have to resort to long balls or (gasp), our fullbacks.

Why has Diego not been lighting up the scene? Simple, we need those fullbacks AND the ball-playing midfielder. Back when we played a 4-3-1-2 in the mid 90s, Zidane had Conte passing in midfield, and talented fullbacks (back then) like Birindelli, Pessotto, Di Livio (who played a bit as a wingback), and Torricelli who had pace and some great crossing. We needed a regista or a passing midfielder with a 4-4-2. Switching to a 4-3-1-2 exacerbates the problem, as our fullbacks cannot cover the work of our wingers AND fullbacks from before the old years.

There was much criticism of Ranieri for playing two defensive midfielders in center, but I don't entirely agree with it. Under Ranieri, there was a defensive midfielder, and a defensive midfielder who could pass. Originally, it was Tiago-Nocerino. Then Tiago flopped, and it switched to Nocerino-Zanetti, then we signed Sissoko, and it switched to Zanetti-Marchisio. When Zanetti was injured in the 2nd year, we often played Marchisio-Sissoko, and I think we notably suffered from Zanetti's absence. Marchisio is a decent passer of the ball, but he's more of a full on center-mid, one who needs to be able to roam around at will, essentially, what Sissoko plays even if he shouldn't be.

So how do we get the best out of Diego at trequartista? It's simple- Juventus need to have a Plan B. (An alternative plan, not the birth control) It sounds kind of contradictory, but we need to be able to play without Diego....with him on the pitch. We need to have fullbacks who can provide some kind of offense, or the passer in midfield. That has a two-pronged effect: first, it allows us to play bypassing Diego, adding the dimension of width or direct pass to the strikers. Second, by adding more threats to offense, it frees Diego from the other team's attention. Too often this season, he's been doubled up on by the other team because our forwards are static, or our fullbacks and midfield can't reach them.

The question of fullbacks is simple: I think Caceres and De Ceglie are the right match. Both have much to learn defensively, but we are rebuilding, clearly, we are not challenging for titles. But both have pace, decent crossing, even a few skills to bypass their markers. The conundrum as usual is in midfield.

Simply put, the vast amount of players on our team cannot complete a 30-40 yard pass accurately, and consistently. In defense, we don't really have a ball-playing defender like Lucio, and of the group I'd say De Ceglie and Caceres are good offensively, though not necessarily their passing. I already above addressed the midfield, and Melo is clearly not the answer at all. So where does that leave us? Here's the 4 "precision passers" of our squad:

Obviously Del Piero does not have the legs to play in midfield, nor would it particularly make use of his talents as a striker. Of the three remaining, Candreva is the most defensive, followed by Diego, and then Giovinco. Candreva, while perhaps naturally a trequartista, could very well adapt to a deeper midfield passer. I am not asking him to be an out-and-out regista, but a central midfield passer, so playing a bit more advanced perhaps. Giovinco could conceivably play as a regista, but like Del Piero, I prefer him more advance and thus those two at seconda punta. Ideally for me, we would play the following: 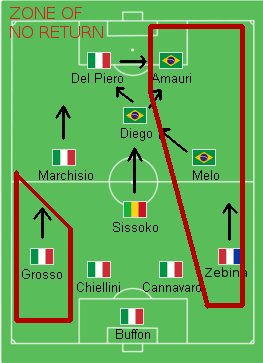 How would this help Diego flourish? Simple. Both Caceres and De Ceglie need to improve their defense for this formation to work well, but offensively, they would provide width. We would not need Diego or our central midfielders to play the wings to have an effective cross, God knows Grosso, Grygera, and Zebina haven't been providing them. The fullbacks would cross for Trez/ADP, and Candreva could deliver defense-splitting passes to the forwards as well. Simply put, perhaps "too much" of our play has been depending on Diego to score, or provide the final pass.

This of course, is a simplification of the game. Positions are not static, and tactics change. I am not suggesting that Sissoko and Melo never are able to pass to the puntas, or that fullbacks never get forward. But our width and passing in midfield have been woeful, and with our forwards in average form (Del Piero and Trezeguet took a while to get into form, Iaquinta has been injured and rusty, and Amauri is in shit) it has put enormous pressure on Diego to come up with something. More adventrous fullbacks and some fine passing in midfield will alleviate that pressure...and allow Diego to express his full creativity that wowed us at Werder.

I was playing around with the photo editing Gimp, as you can see above. I wish I had some actual talent with photo-editing software, but alas it is not the case. Nonetheless, in a hope to raise some spirits, I present to you below, "what's really wrong with Juventus this season." 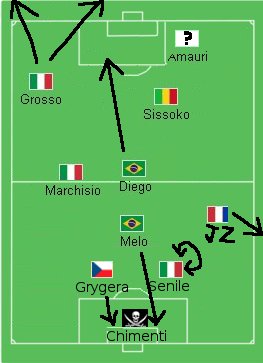