Get To Know Italy's Newest Stadio

Share All sharing options for: Get To Know Italy's Newest Stadio 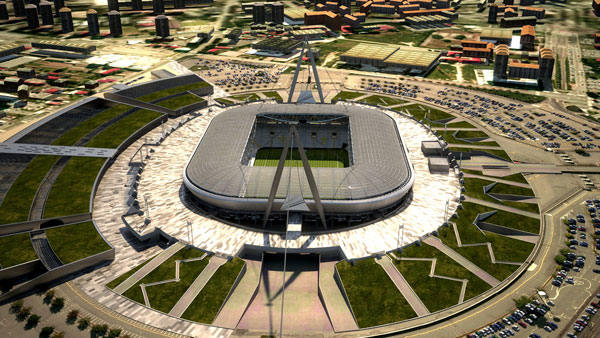 The final photos are still all computer generated for now, but in roughly one year's time, Juventus will take to the pitch in their brand new state of the art stadium in what will represent a few firsts for Italian football. The most obvious development will be the absence of any moats, fences, and or useless running tracks separating the spectators from the pitch. The second, and perhaps most important, will be the absence of any need to lease, and or revenue share, the arena with the local municipality. Ladies and gentlemen, may I present the reason why our President hasn’t been fired. 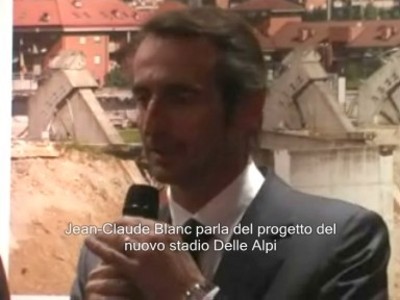 Recently new details about the stadium were released, however one can only describe them as being bitter sweet. As much as the prospect of having a new stadium would excite any sports fan, the idea of playing some of the worst football of your club’s history in it would not. In fact, if any loyal supporter were given the choice between the two, new stadium or good football, they’d gladly watch every game from a grassy knoll. Nevertheless, ground has been broken, and the construction is well underway.

You might recall in the summer of 2003, Juventus purchased the Delle Alpi from the city of Torino for a fee of around €23 million. Unfortunately, due to the horrible vantage points you’d expect from a stadium not originally designed for football, the attendance was piss poor throughout it’s time, and the club wasn’t fully enjoying the ownership of it’s means of production just yet. Fast forward €150 million dollars in construction costs and the dream as a member of the bourgeoisie was reborn. 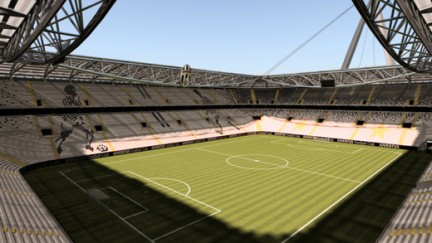 The new stadio, to be named officially by the stadium’s marketing firm SportFive at a later date, is characterised by many wide ramps. The first of which rise from street level up to the ring immediately around the outside of the arena. This open design element is once again highlighted by the use of four more wide entrances on each side of the new Delle Alpi leading directly inside it. According to reports, this enables the structure to be completely emptied in less than 4 minutes. Good to know in case your planning another tifosi protest perhaps.

Now although I’m completely pumped about the prospect of having an “English style” stadium, where the fans are just a few feet away from the pitch, I sense an iddy biddy security issue as Italy has not yet adopted an “English style” policing vigor inside and out of their sports arenas. In fact, there’s quite a remarkable lack of it, and culturally speaking, there’s quite a remarkably large amout of dissent held by the population towards any form of authority. Certainly it will be interesting to see what types of security measures Juventus will look to employ in the peninsula’s newest footballing habitat.

Below are the latest computer generated videos, along with a brief description, of the arena’s executive seating options and dinning areas. With close to 20 bars located in and around the stadio, rest assured there’ll be a place for all of us to drown our sorrows.

Giovanni Agnelli, the club will not only be the sector with the best view around the stadium, it will become the place where the noble tradition of a century-old company is renewing the passion and faith of fans of exception. It will be the perfect location to watch the game, along with lounges and areas of pure black and white style: an elegant and exclusive environment where you can share your love for Juventus.

Only the Tribune will give you 100 more central and closer seats to the pitch, only 7.5 meters away from the players and behind the bench for Juventus in the stands. You live the match from the sidelines, you're in the game, smell the grass: it will feel absolutely unique.

Elegance at its best: it was when he played, it still is today as honorary president of Juventus. If for you too, black and white style is a way of life, your place at the stadium will be the Club Giampiero Boniperti: modern and refined, steeped in legend and tradition that can make you feel like a spectator of excellence and to transmit unique emotions, the face of history.

Dedicated to those who feel football on the skin. If you want to experience all the emotions of the game in a comfortable and exclusive setting, Omar Sivori, the Club will be the one for you. A special atmosphere, passion and heat, contained in a unique place for its tranquility, elegance and modernity: Omar Sivori, the Club will be the best way to become part of the service hospitality of the new stadium of Juventus.

The Sky box will be the most convenient and functional for those who want to experience the game and the stadium in perfect peace. A private sitting room which will offer you and your guests the ultimate in comfort, all the privacy you need and many services that will enrich your experience at the stadium. The sky boxes will be at your disposal not only during matches but 7 days on 7 making it an exclusive meeting room overlooking the field.

"We planned a stadium that lives its key moment during the matches, but that at the same time has its own multi-functional dimension, with spaces conceived to fulfil different needs and with services for the whole family. A shared place, in short, a daily meeting point for people of all ages and with different interests, a natural aggregation center: in other words a XXI century's agora."

"We put soccer at the centre of our planning and the result is a stadium that will make supporters feel like they're in the middle of the pitch, in a place transmitting enthusiasm, passion, but also serenity. To get in, there are no steps but only wide access ramps leading to the ring surrounding the stadium. The paths are clear, no funnels or corridors. The ring allows the onlooker to look around, with no barriers, no walls, and no obstacles. It's just the width of access spaces that creates security in onlookers, in short, a perfect place for everyone, for families and for children."

"The engineering solution of the covering is unique and recalls a great lightness: it's about a hanging covering attached at its four corners by steel wires tensed on two big 90 meter high masts. Studied in the Wind tunnel, it has a profile like the one of airplane's wings to avoid wind turbulence and therefore made of very light membrane. A choice optimizing security, functionality and costs, and also a perfect structural and aesthetics symbiosis."

"With this Juventus project we tried to revalue not only a building, but a larger urban area. We started from two elements exemplifying the spirit of the new stadium, in the sign of novelty in continuity with tradition. One of the main characteristics of the new stadium is the external walls coating, that is replicated in all structures surrounding the arena, to repeat the cohesion and the continuity of the involved entire urban area."

"Collaborating to the making of the Juventus' new stadium makes me extremely proud because it allows us to express once more our creativity on a Turin city's icon, after the lucky experience of Olympic Brazier. During the planning of the stadium we took advantage by the correspondence between Juventus' and Pininfarina's brand identity, both with elegance, essentiality and with that Italian touch that becomes a distinctive sign."

"We are not only creating a stadium we are remaking a piece of the city, a big project of town-planning regeneration on an area of 355,000 square meters. We wanted to create spaces drawn up for everybody: supporters and families. A stadium that intends to be a big Italian square, the place where you can meet for important moments and to celebrate, where town-planning quality becomes a deterrent for violence. A perspective confirmed by authoritative town-planning experts, considering reclaiming of urban spaces as a process of recognition of the place as a tranquillity place, a pleasant place, a place of aesthetic beauty and consequently of mutual respect." 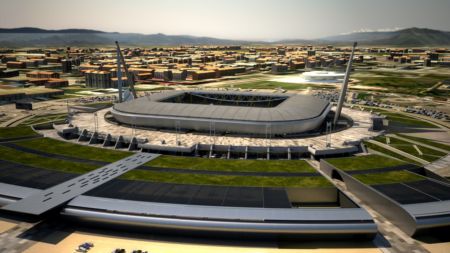