Juve loses to Inter, No One is Surprised

Share All sharing options for: Juve loses to Inter, No One is Surprised

Anyone surprised by the result? I know we had some hope, but ultimately, Inter is a better team, and Mourinho, the better tactician. Before the game, I expected a 0-2 result and that's what happened. Hey, at least it wasn't worse! With 4 games remaining, 2 losses and 6 goals will see us set the record for the most losses and most goals conceded in a season. If we lose 50% of our games and concede 1.5 goals per game, and voila...undoubtedly Juve's worst ever season. 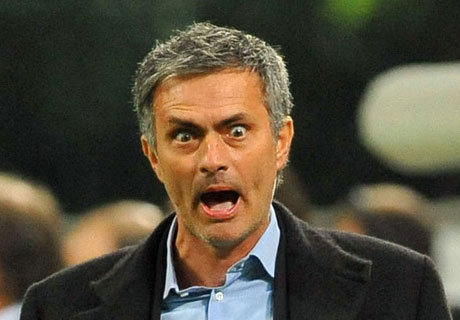 "I NEED TO LAY OFF THE CRACK"

Buffon: 7- Several excellent saves, with no chance on Maicon or Eto'o's goals. Buffon is back.

Zebina: 5- Failed basic passes, and whenever Inter ran at him he looked completely clueless.
Cannavaro: 6.5- Aside from being roasted by Milito once, Cannavaro looked prepared for the game and played quite well.
Chiellini: 6.5- Looked assured at the back, and with Cannavaro the two held out Inter's offense for most of the game with Buffon, no help from their fullbacks.
Grosso: 5- Another terrible game. Did little offensively, and was torn apart time-after-time by Maicon and Balotelli. 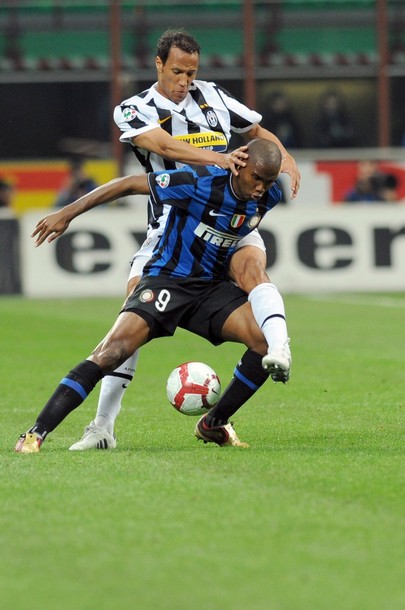 If only this was how the game went...

Marchisio: 6- Played a relatively conservative game. Didn't make any errors, but as soon as Sissoko went off, the game's momentum went completely against us and couldn't do much.
Felipe Melo: 6- Played well up until Sissoko was sent off, which kind of goes for the whole midfield. Tried later on, but couldn't do much else.
Sissoko: 3- Utterly stupid. The other day, some Liverpool fans were saying he was a tremendous player. This game reflects much of his Juventus career, lacking in the maturity department. The first yellow was horseshit, but to make that challenge on Zanetti when you're already booked is absolute insanity.

Diego: 5.5- Played well in the first half, but as soon as Sissoko went off, he had little support and was supplying Iaquinta in poor form and Amauri who always sucks. What can he do?

Del Piero: 6- Played very well in the brief time he was on, and was one of the few threats up top. Right or wrong decision to take him off? Who knows.
Iaquinta: 5.5- Continues to be in poor form following his injury, and he looks bankrupt of confidence. One good touch and shot that could have been a goal if he took it better. A slightly improved display from recent weeks, with more work but still no result. 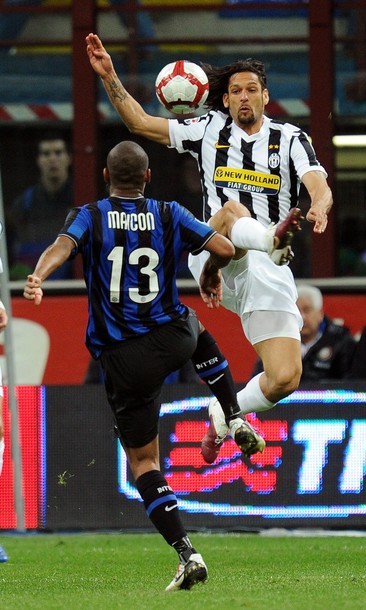 Zaccheroni: 5.5- He had the team prepared well from the get-go, but Sissoko going off completely screwed him over. The question that remains is, should Poulsen have come on for Iaquinta instead?
Poulsen: 5.5- Battled hard in midfield and had some good passes, but the game was over when he came on.
Amauri: 4.5- Complete waste up top, and largely responsible for Maicon's goal. We need to offload him badly.

Things I Think I Think:
#1- ZonalMarking has an excellent writeup about the tactical battle. As ZM indicates, the Sissoko sending off was the turning point.
#2- Did Zaccheroni get it wrong? He certainly went conservative, and that's one thing I'm tired of. Look, I appreciate a clean sheet as much as anyone else, but I'm sick of conservative coaches giving up and settling for the draw. Earth to Ranieri, Ferrara, and Zaccheroni, we almost always lose the games. It was either Poulsen for Del Piero, or Poulsen for Iaquinta. I can understand his decision, against Lucio and Samuel he wanted a prima punta and Diego-ADP wasn't likely to score against them. Even more unlikely, however, is Iaquinta-Amauri up top. C'mon!
#3- As I said above, 2 games and 6 goals and we're the worst team of all time.
#4- Wow, that press silence lasted a long time, right? One win against Cagliari was enough to remove it, for some reason.
#5- Recent rumors have been us going for Dirk Kuyt. You've gotta be kidding me! The positive transfer story of the week is that Martin Caceres wants to stay at Juve. Sign the kid up....but negotiate the price down, Barca doesn't want him. 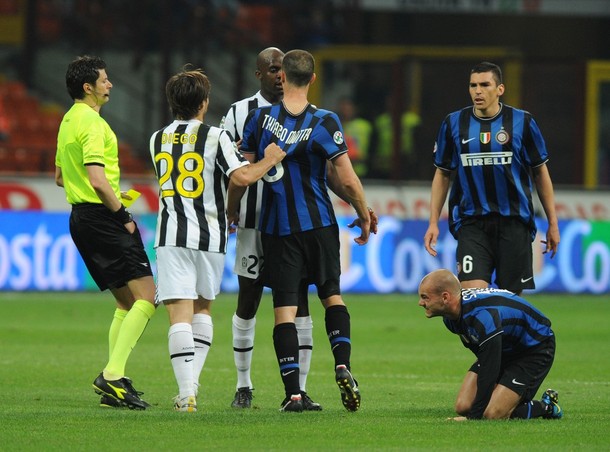 #6- I reiterate that I do not want to finish in 4th, nor does it look likely at all. Some have said it would hurt our transfer market dealings, but I'm not sure I agree. Big name superstars might not join us, but as we saw this summer...that's unimportant. We need young Italians, and Juve is Juve for them, even if we are bad right now, I think we can convince them to join us. We need 3 defenders at least (Lucchini, Ranocchia, Criscito) and either a midfielder or a striker. (Pazzini for Amauri, bring back Ekdal) Those targets will come if we talk to them, get on the phone, Secco. The 25million euro Brazilians might come...but they haven't improved us that much.
#7- Bari this weekend. We finally got our first win against a southern team last week against Cagliari, and Bari have nothing to play for. Almiron played well and scored again...look for him to have an excellent game and score. At the very least, we should be scouting Bonucci and Andrea Masiello. (And maybe consider Almiron's future...who is 1 goal away from scoring the same of Amauri)
#8- I haven't mentioned referees yet, but this was a poorly adjudicated game. I won't be like the Interistas and dedicate the title and vast bulk of the article to it, suffice it to say Sissoko's first yellow was given for no reason, and somehow Samuel didn't get sent off for persistent fouling. I'm not going to go into it more because we were going to lose this game regardless, but it wasn't a fairly refereed game.
#9- The Inter Offside was ready to offer Eto'o as a human sacrifice around January. He's a genius striker, and now they see it. Class striker, I'm disappointed he's wearing nerazzurro. 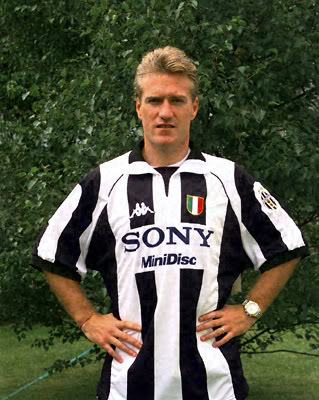 Didier Deschamps has admitted he would sit on the Juventus bench again after resigning in 2007. “It was a huge mistake. Leaving Juve was not an easy decision. I was very tired and lacking clarity, plus I received some bad advice,” confessed Deschamps on Sky Italia television. “It was not a sudden turnaround, but I should’ve waited a little and avoided making this huge mistake. Now I know, I take full responsibility and it cost me a great deal, because the football world did not understand why. Resigning after promotion seemed pointless, but I was young and paid for a lack of experience.”

When asked if he would be willing to take the reins in Turin yet again, Deschamps was surprisingly open to the idea. “Never say never, although to be honest it seems unlikely, as they are the same directors who I worked with last time. If I were them, I wouldn’t have me back. I am happy at Olympique Marseille now, but Juve are always Juve. Would I go back? Yes.” Another candidate to lead the team next season is current Bordeaux Coach Laurent Blanc. “He is very experienced, speaks Italian and has a different personality to mine. It’s much harder to be a Coach in Italy than anywhere else, as there are always fewer foreign tacticians. You get the feeling you’re taking away a job from an Italian Coach, so more is expected of you.” 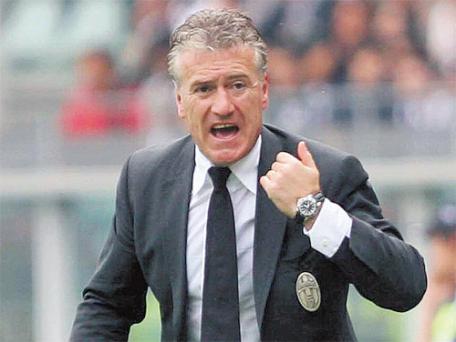 "Pick me! I will return Juventus to glory!"

We need to go 100% out for Deschamps. He has no reason to apologize, but now that he has, hopefully Blanc will accept his olive branch and consider him. He's good with tactics, young players, and he's a young, ambitious coach with a managerial and player past at Juventus. He took Monaco to the CL semifinals and won a League Cup, then he of course won promotion with Juventus. He's taken a break since then, but signed with Marseille last summer where he has broken their 18-year trophyless streak, with a League Cup and are 5 points ahead with 5 games left. Last year Bordeaux broke Lyon's dominance, and this season Marseille is 9 points ahead of Lyon, and 11 ahead of Bordeaux. I like Prandelli, but Deschamps has an untainted (non-Viola) past, and more silverware in a far shorter coaching career. BRING BACK DIDIER!! 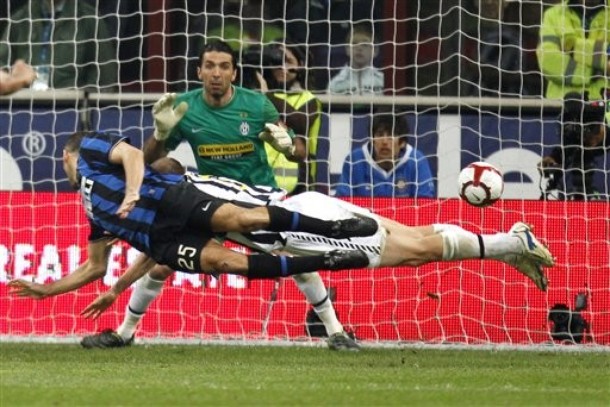 This is such an odd picture. Normally it's the defenders standing up, and the keeper diving sideways.

-Amauri: (10 Weeks) Not only was he worthless up top, he was absolutely schooled by Maicon for his first goal. Amauri jumped in front of him like an idiot, just like being schooled by Sirigu last fall. Looking more and more like he deserves a place in the Worst XI of the Noughties.
-Chimenti: (9 Weeks) Chillin on the sidelines
-Felipe Melo: (7 Weeks) A relatively good performance against Inter, though not enough to get him off. If he puts in a good shift against Bari, might be off the list.
-Grosso: (5 Weeks) Yet another awful game.
-Grygera: (10 Weeks)
-Sissoko: (1 Week) Braindead move to get sent off and doom Juve's chances of getting any points out of the game.
-Zaccheroni: (3 Weeks) Got the tactics right from the start....but it went badly and he had no answer.
-Zebina: (5 Weeks)